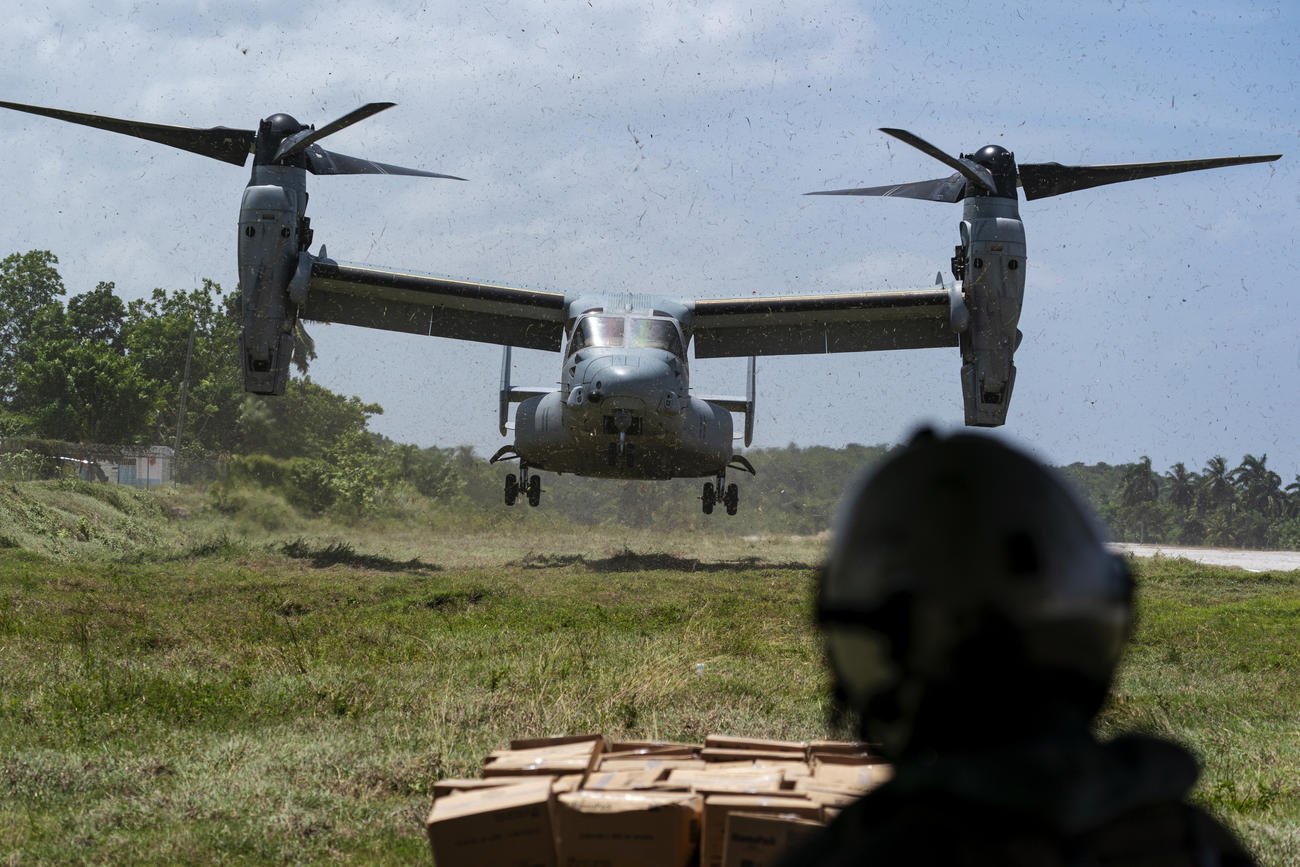 JEREMIE, Haiti (AP) — U.S. military aircraft are now ferrying food, tarps and other material into southern Haiti amid a shift in the international relief effort to focus on helping people in the areas hardest hit by the recent earthquake to make it through the hurricane season.

Aircraft flying out of the capital, Port-au-Prince, arrived throughout the day Saturday in the mostly rural, mountainous southern peninsula that was the epicenter of the Aug. 14 earthquake. In Jeremie, people waved and cheered as a Marine Corps unit from North Carolina descended in a tilt-rotor Osprey with pallets of rice, tarps and other supplies.

Most of the supplies, however, were not destined for Jeremie. They were for distribution to remote mountain communities where landslides destroyed homes and the small plots of the many subsistence farmers in the area, said Patrick Tiné of Haiti Bible Mission, one of several groups coordinating the delivery of aid.

At the request of the Haitian government, getting as much help to such people as fast as possible is now the focus of the $32 million U.S. relief effort, said Tim Callahan, a disaster response team leader for the U.S. Agency for International Development.

In the immediate aftermath of the magnitude 7.2 earthquake, which killed more than 2,200 people and damaged or destroyed more than 100,000 homes, the focus was on search and rescue.

That was complicated by heavy rain from Tropical Storm Grace as well as earthquake damage to roads and bridges, in an area where the infrastructure was in bad shape to begin with. The threat of gangs, in a country still reeling from the July 7 assassination of President Jovenel Moise, also made it hard to distribute aid. As a a result, many Haitians had grown increasingly impatient with relief efforts.

“We’re just trying to get as much material out to the most affected areas as fast as we can. If you do that, then the frustration level goes down,” Callahan said over the roar of helicopters at the Port-au-Prince airport, where U.S. troops and civilian aid workers labored to load aircraft with pallets in the hot sun.

That is where the U.S. military comes into play. Troops under the direction of Miami-based U.S. Southern Command have so far delivered more than 265,000 pounds of relief assistance.

Among those troops is the unit from North Carolina, known as the Fighting Griffins and based at the New River Marine Corps Air Station, which allowed Associated Press journalists to come along as they delivered emergency supplies.

Two crews took off from Naval Station Guantanamo Bay, Cuba, flew to Port-au-Prince to pick up supplies, and then made multiple trips across the mountainous southern peninsula to deliver their loads. They stopped only to refuel on board the USS Arlington off the coast of Haiti.

It was an upbeat mission, with the flight crew and pilots helping the Haitian aid workers unload the aircraft, then shaking hands as they said their goodbyes.

One crew, which delivered more than 8,500 pounds of goods on Saturday alone, brought along a Marine of Haitian descent from New York City as their interpreter. “It really means a lot to me to do something like this,” said Lance Cpl. Lunel Najac.

The U.S. effort is expected to continue at least for several more weeks, though whether it will be enough to get people through the rest of the hurricane season remains to be seen.

“People need food, water, tents, tarps,” said Wilkens Sanon of Mission of Hope Foundation, another of the groups working with the U.S. to channel aid to people who need it most.

China Protests US Navy, Coast Guard Ships in Taiwan Strait
Here Are the Top Training Mistakes Made by Athletes and Former Military