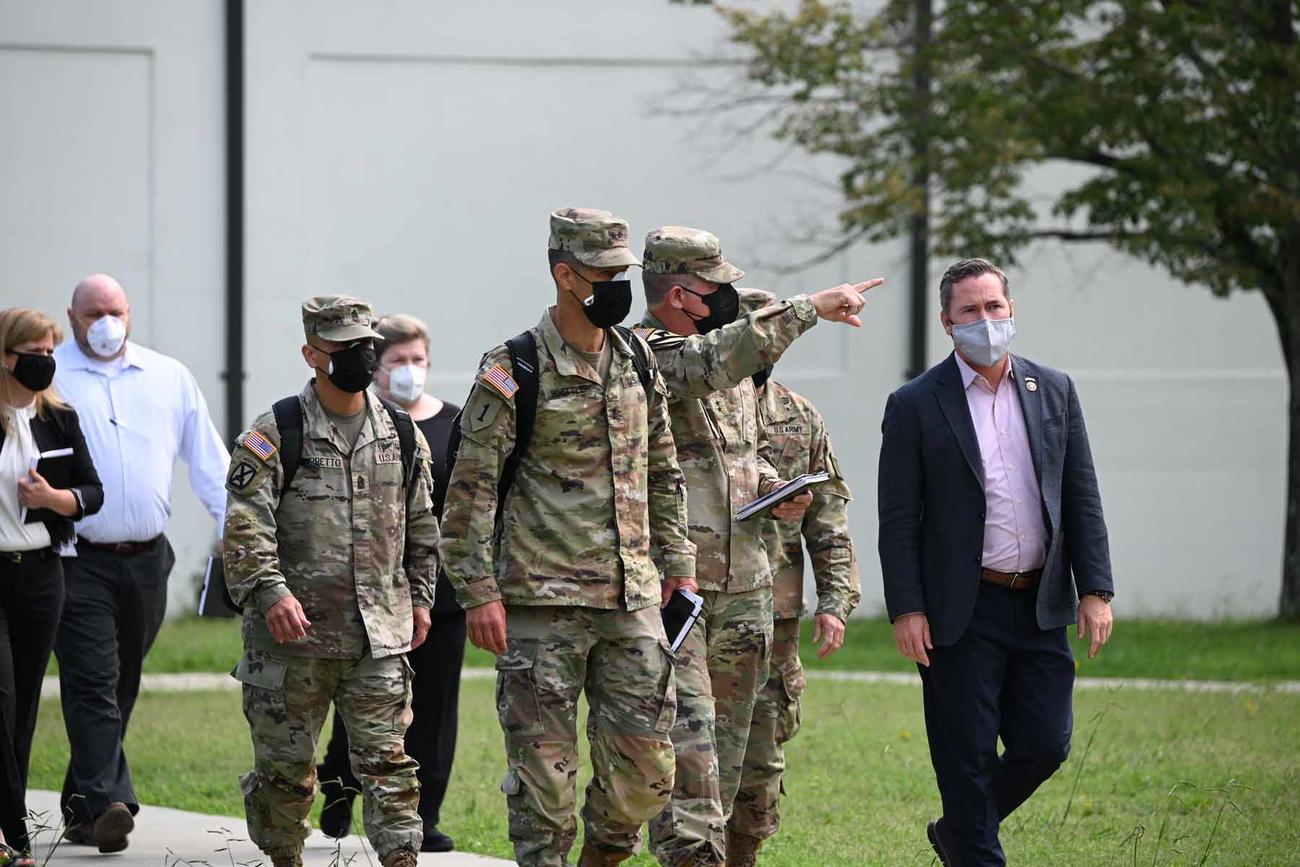 Lawmakers got their first look on Monday at Afghans moved to Fort Lee, Virginia, the first wave of immigrants who had helped U.S. forces and are fleeing the country as the Taliban continues to conquer large swathes of territory.

In an interview with Military.com on Tuesday, Rep. Michael Waltz, R-Fla., described the conditions for the Afghans, who have been waiting for visas to be processed under a special program designed to help protect those who had worked with coalition forces and were facing threats from those opposing the U.S. presence in Afghanistan.

Members of the media have not been allowed to visit the Fort Lee facility to date, and the collection of four lawmakers that included Waltz was the first group of outside observers to interact with the refugees. Two hundred Afghans arrived at the base on July 30, and the base has been told to prepare for upward of 3,500 people to be housed.

The Afghans are staying in a building run by Holiday Inn Express on base, according to Waltz, and not in barracks.

Read Next: Navy’s New Triton Drone Getting Close to Taking Over for Older Patrol Aircraft

“It looks like what you would see in an average dorm room,” Waltz said. “For the families, a bit larger [rooms] with a mini-living room, kitchenette and bedroom. They have a tent outside serving three meals a day, and some recreational facilities they’ve set up, especially for the kids.”

“Most of the families are four to seven [people]; it’s a lot of little kids,” Waltz said. “To see these little girls wear their best dresses, all of them with little American flags, so excited, asking about American schools, couldn’t wait to start this fall … big smiles on their faces, it was really heartwarming.”

Many of the Afghans served as interpreters for the U.S. during its 20-year war in Afghanistan. Since the Biden administration started its withdrawal from the country, it has been a mad dash to get as many allies out of the country as possible. As the Taliban rapidly take ground, those loyal to the Taliban have repeatedly threatened Afghans who assisted coalition forces. The withdrawal is nearly complete, with U.S. Central Command saying on Tuesday that the pullout is more than 95% done as the Aug. 31 deadline, set by President Joe Biden, to be out of Afghanistan approaches.

The effort to house thousands of Afghans at Fort Lee has largely been wrapped in secrecy, with the Biden administration only offering scarce details. The media will not be granted access to any of the Afghans, a State Department spokesperson told Military.com. It’s unclear how many Afghans are currently on the base and the spokesperson declined to share any data, citing security concerns.

The Pentagon expects the Afghan’s stay at Fort Lee to be brief before heading to their final destinations in the U.S. In the meantime, the Defense Department will be responsible for their “food, water, proper sustenance” and medical care, according to Kirby.

There’s already evidence that the Special Immigration Visas process, the program under which the Afghans are being admitted to the United States, is moving quickly despite a history of extensive delays.

“Some have already moved on to their destination in the U.S.,” Waltz told Military.com. “That was surprising and refreshing to hear.”

Read Next: Bases Bring Back Mask Mandates as Coronavirus Variant Sweeps Through Unvaccinated Parts of America

In the meantime, Waltz said the process still needs to be streamlined and mechanisms need to be put in place for nonprofits and other organizations to provide assistance, such as donating money and goods to Afghan families.

“Some work that still needs to be done is better integrating donations and other organizations that want to help,” he said “There’s a pent-up demand to be helpful.”

Yet some Afghans are not eligible for the special immigration visa because they didn’t meet the minimum duration of service, or worked a job backed by the U.S. government, but didn’t work for the government itself.

The State Department on Monday announced it is offering potential refugee status to some Afghans who were unqualified for visas.

However, Secretary of State Antony Blinken noted to reporters that Afghans seeking refugee status need to apply for asylum from a different country such as Turkey or Iran. He said those countries should open their borders to Afghan refugees. Yet the Taliban has a network of checkpoints throughout Afghanistan, making fleeing the country a daunting task.

“I don’t want to deny the challenge and the difficulty,” Blinken said. “It is indeed a hard thing.”