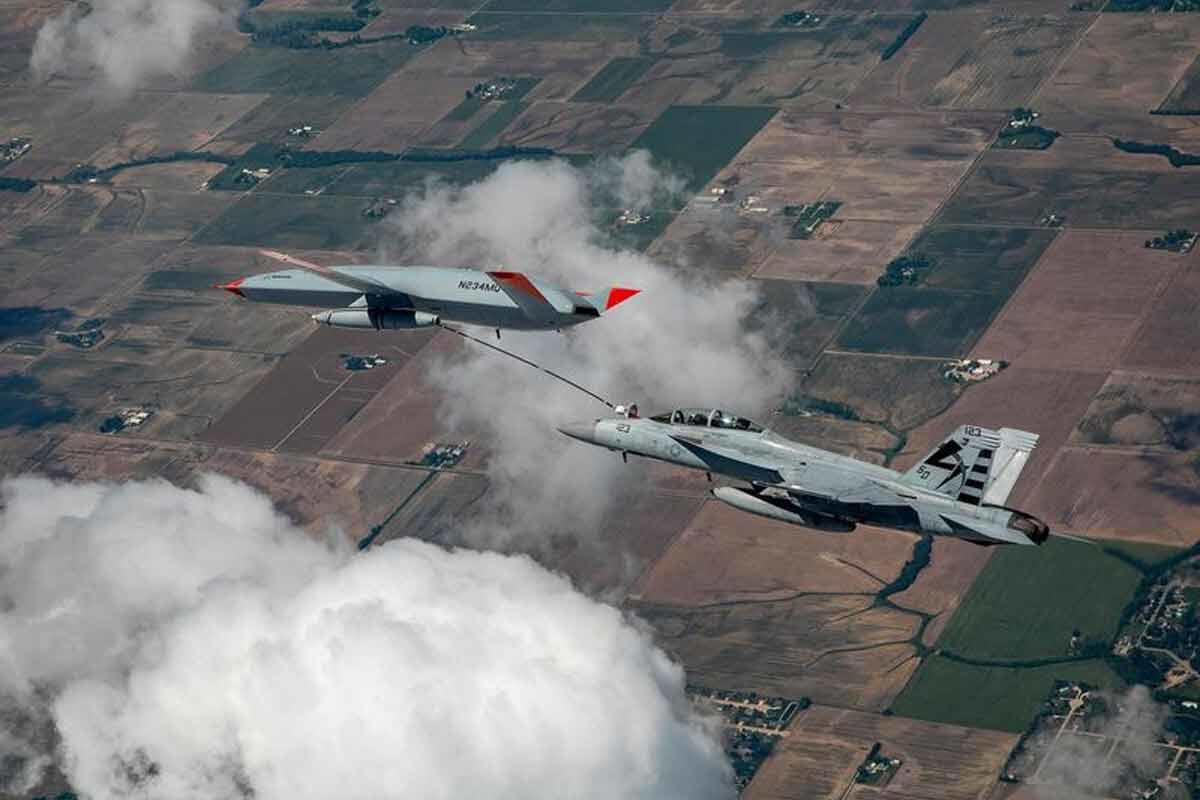 The MQ-25 Stingray drone was able to successfully attach to and refuel a Navy F/A-18 Super Hornet during a test flight June 4 out of MidAmerica Airport, Illinois, the service said in a release. The airport, near St. Louis, Missouri, serves as the location for the test program, overseen by the drone’s manufacturer, Boeing.

During the test, the fighter tailed the drone, known as the MQ-25 T1, steadying itself at the proper airspeed before the drone attached its probe-and-drogue system, the release said.

Read Next: In Major Promotion Shift, All Soldiers Will Serve as a Corporal Before Moving to Sergeant

The T1 then transferred fuel to the aircraft from its Aerial Refueling Store pod fastened under its wing, according to photos accompanying the release.

“This flight lays the foundation for integration into the carrier environment, allowing for greater capability toward manned-unmanned teaming concepts,” said Rear Adm. Brian Corey, the program executive officer for Unmanned Aviation and Strike Weapons, in the release. “MQ-25 will greatly increase the range and endurance of the future carrier air wing — equipping our aircraft carriers with additional assets well into the future.”

Service leaders announced in November that they want to base a squadron of 20 MQ-25A tanker drones, which they expect to revolutionize carrier air wings, at Naval Base Ventura County in Point Mugu, California.

The Navy is studying how the drone — capable of not only refueling aircraft in flight, but also conducting intelligence, surveillance and reconnaissance operations — improves carrier air wing operations. It will be the Pentagon’s first operational carrier-based unmanned aircraft.

The service first experimented with the semi-autonomous Northrop Grumman-made X-47B prototype drone in 2015, marking the first time an unmanned aircraft refueled in flight. In that exercise, the unmanned combat aerial vehicle received fuel from a Boeing 707 tanker. The Navy ultimately shelved the X-47B program following initial tests of the two drones it had in inventory.

Navy leaders have called the Stingray a game changer for carrier operations since it will free up manned tankers to perform other missions. The MQ-25 is expected to conduct refueling for deployed Super Hornets, EA-18G Growlers and the service’s F-35C Joint Strike Fighter.

The Boeing-Navy teams will now analyze data from the first flight, such as “airwake interactions” and how the aircraft may improve on other flight parameters, the release states.

The teams will determine whether further adjustments are needed, such as software updates to assist in operations. Potential modifications are not expected to disrupt follow-on tests, the Navy said.

Testing with the T1 drone will continue over the next several months “to include flight envelope expansion, engine testing, and deck handling demonstrations aboard an aircraft carrier later this year,” the release adds.

The MQ-25 had its first flight test in 2019, according to the company.