Four Years After Her Husband’s Death in Niger, a Gold Star Wife Tells His Story 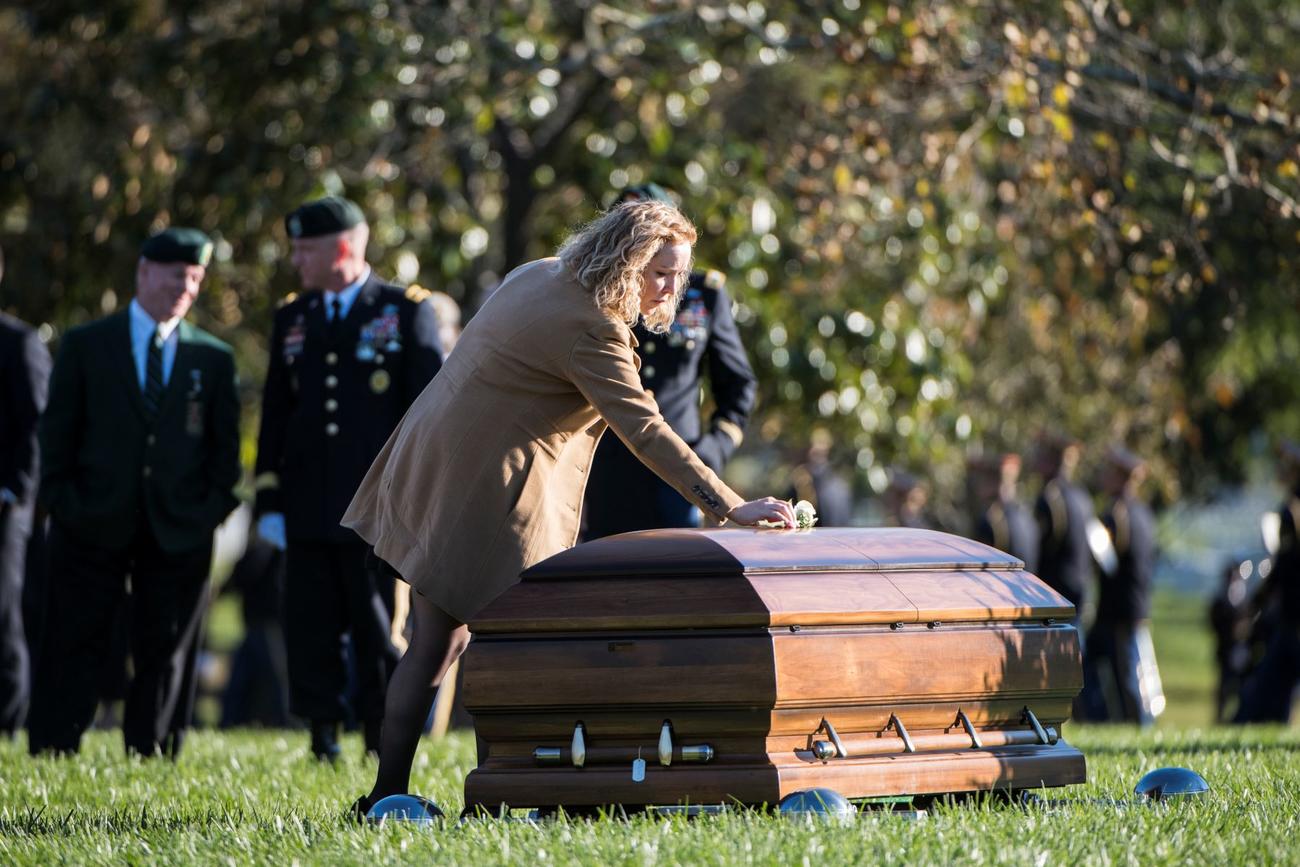 In early October 2017, the nation was shocked to learn that four American soldiers had died in a terrorist ambush near the village of Tongo Tongo in the West African nation of Niger — a region of the world few knew American troops were deployed to, much less in combat.

One of those soldiers was 35-year-old Special Forces medic Staff Sgt Bryan Black, a husband and father of two from Washington state. His wife, Michelle, would receive two devastating blows: the news of her husband’s death; and then, more than half a year later, the results of an investigation that determined the 11-member Army team had made critical errors in mission planning and execution.

“The special operators [in Africa are serving well … this particular team is not indicative of what they do,” Marine Gen. Thomas Waldhauser, then-commander of U.S. Africa Command, said in a May 2018 press conference. (Army Maj. Gen. Roger L. Cloutier Jr., AFRICOM’s chief of staff who appeared with Waldhauser at the conference, did cite the “extraordinary bravery” of the soldiers during the ambush.)

Michelle Black refuses to accept that narrative. In Sacrifice, a memoir-investigation hybrid published in May by G. P. Putnam’s Sons, she aims to tell a different version of events, one pieced together from interviews with the surviving soldiers. It emphasizes team leader Capt. Mike Perozeni’s urgent requests to abort what would become the fatal mission — requests cited by the soldiers but not fully substantiated in the investigation — and the team’s sense of unpreparedness and lack of resourcing as they followed orders to chase a terrorist up to the border of Mali in accordance with rapidly aging intelligence.

It’s an ambitious effort, and evident on every page is Black’s powerfully motivating love for her fallen husband and care for the men he served with. Military.com spoke with her ahead of Memorial Day; the following Q&A is edited for space and clarity.

Military.com: How did this book come about? And how far back did you know you’d be writing something like this?

Michelle Black: From the first day Bryan died, I thought I wanted to write a book about him, just so my kids had it. And I just started writing our stories. I think it was a mixture of helping me with grief, and kind of working through everything that was going on, and knowing that I would have his legacy written down, so that they would know who they were, where they came from. Because they were fairly young, they were nine and 11. So initially, that’s all that it was, I didn’t think I would publish anything that would be beyond just for my family. But as things progressed, you know, between the video release and all the media, and finally, really, what drove me was probably Gen. Waldhauser And the final straw was when he got on national TV, and he just said, “This scene is not indicative of what special operators do.” It completely leveled this accusation at the team and all the men who died that day, too, that they were not worthy. And I thought, [Bryan] sacrificed his life, all these men that died that day, they sacrificed their lives, and now you’re completely dishonouring that and disrespecting their sacrifice and you’re disrespecting the families. So something in me just snapped that day … that day the decision was made.

Military.com: In this book, you are not at all hesitant to name names: [The Green Beret team’s battalion commander] Lt. Col. David Painter, Gen. Thomas Waldhauser, [U.S. Special Operations Command Commander] General Tony Thomas. And you’re really clear about the times when you felt that they failed the team or pursued a narrative that strayed from the truth. Have you heard from any of these current and former military leaders since your book was published?

M.B.: No, I haven’t. I think it’s important to keep in mind that they didn’t hesitate to name names when it came to, you know, men on the team that they wanted to blame for their decision.

Military.com: Are you still hoping that the military takes some action to set the record straight or vindicate the team members somehow? Or is it enough for you to publicly tell the story the way that you feel It should have been told and get it out there?

M.B. I do think that it would be enough to have it out and be told publicly, I think it’s important to make sure that nobody else is put in harm’s way because of actions like this. And so if that means that that does, in the end affect people, so be it. My biggest concern from the day this all started, it wasn’t about punishing people. So I never wanted anybody punished. It was like, Hey, let’s look at this honestly, let’s figure out what happened. And let’s prevent it so nobody else has to lose their lives needlessly. So, yeah, I mean, I’m satisfied with the public knowing. But if I were to find out that these same people, you know, caused another incident like this, then I’m not satisfied.

Military.com: One outcome of everything that happened is, it seems like you formed a really, really tight relationship with these team members. When there’s a loss like this, I’m sure it’s very common for surviving family members and surviving team members to come together, because of your common understanding. But do you feel like those bonds went even deeper? And in this case what was that, like, kind of walking through it alongside the men that your husband served with?

M.B.: Maybe it’s deeper, or maybe it always is [like that.] I feel like they’re my brothers. And I understood, I think, that battle with them. So I don’t know how that feels, as far as, you know, when you’re in combat, and you go to battle, but I feel like we all fought a battle, as far as everything that happened in the aftermath. So we had the loss, but there was also this huge battle. And I don’t know, we’re definitely all still pretty tight.

Military.com: Something that really struck me and stayed with me came close to the end of the book, when you talk about the loneliness feeling of being unprotected, that comes with being a widow. And even though you’re trying to hold leaders to account and lead your family and make the right choices for them, you have to put on this appearance of strength and, while still really feeling alone. And I was thinking that much of the experience of being a Gold Star spouse in particular is unseen. And what do you wish more Americans knew about that experience, and Gold Star families like yours?

M.B.: I think what people don’t realize is how quiet it is. Usually at the end of the day, you have your husband there, and you decompress. And you talk about all the big dreams, and it’s something to not have someone to share that with. Where you want to go, ‘Wow, look, what I did’ and you realize, there’s no one to tell. And you got to pick up the phone, and there’s no one to call because everyone’s home with their husbands and you don’t want to disturb their time. So there’s, there’s just the level of alone that you don’t realize exists. And I think the other thing is, we’re coming up on Memorial Day. One time recently, I was in a Safeway and the lady was like, “What are you doing for the long weekend? And I didn’t even realize it was a long weekend; I’m distracted by memorials and different things I have to go to. And I’m trying not to let her see me tear up and walk out shaking. Like, I have to go back to the grave. I have to go buy flowers. And one of my friends I just met, she just lost her husband; we’re burying him this weekend. And it just was an overwhelming experience to realize, “Happy Memorial Day” is a thing. And I’m guilty of that, I used to do that. But that’s not what it is for anybody who’s lost somebody overseas. It’s not happy. It’s absolutely horrific.

Military.com: If you could send one message to Americans about how they should view Memorial Day or encourage them to do one thing to acknowledge its real meaning, what would that be?

M.B.: Honestly, I think what would be amazing is if they read a book like this, or familiarize themselves with one story of even just one soldier or their family that was lost. And say their name that day, you know, and even if you’re out partying and you’re on your boat, you’re having a great time. Just say, you know, we’re going to take a minute, have a moment of silence, tell their stories, say their name. And that’s it. It’s a moment to remember why we’re really here, why we’re free. And that for a lot of people, it’s not a happy thing.

Military.com: For you, as inconceivably sad as what I guess you could call typical experience of losing a spouse in combat might be, you had to deal with so much more in the sense that it was, you know, in headlines for so long and very public. And then there was the blowback in the investigation and the blame. And what difference did all that make in processing and experiencing grief?

M.B.: I think it delayed dealing with the grief. And I felt like I couldn’t join a lot of normal grief groups, because I would go in and hear, “Oh, you know, I lost my dad, or I lost my brother. And for me, it was like, Where do I begin? I felt like I would go in and steal the grief show. There was a lot of trauma that came with it, I don’t think I understood that. So yeah,it was delayed, and it took a lot longer. And I think writing the book made a big difference. Because I had to write a lot of that stuff down and relive it. I had to face it again, and actually write out, what did I feel in that moment? How did that affect me? And so I was able to work through a lot of things that before, I knew if I went and spoke about it in a group setting, it would just take over, you know, for hours, the whole meeting and ruin it. So for me, it almost separated me even more and made me a little more lonely.

Military.com: How will you spend this Memorial Day?

M.B.: We’ve been working with Wear Blue: Run to Remember because [Lisa Hallett], the gal who started it, is local. So we’re going to go down there and my boys have been paired up with some mentors. And they’ve been training every week to run a 5K. And a lot of the girls from the widow group I started when I moved here are going to meet down there and just Support Wear Blue, and go out and run for our heroes.