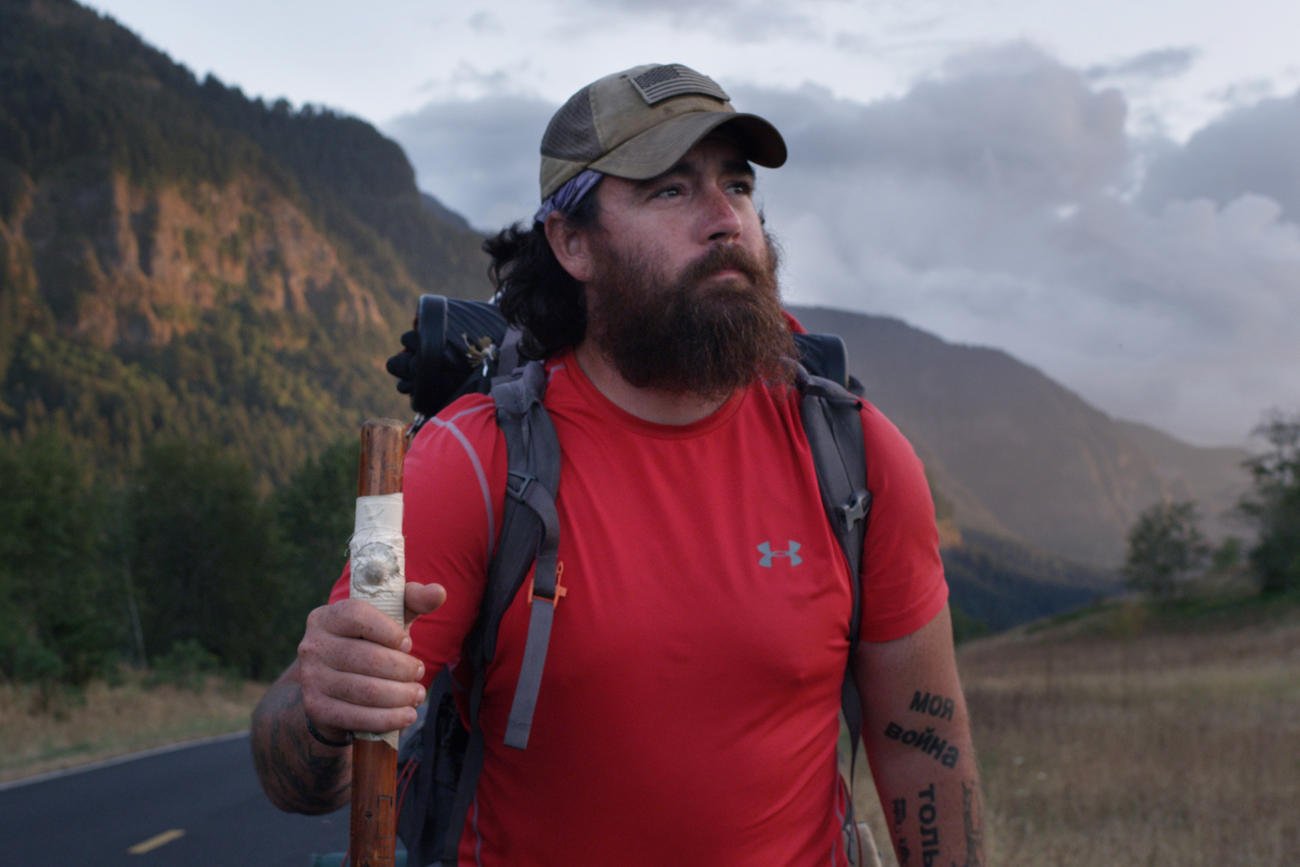 Lots of well-intentioned folks want us to take pity on veterans battling post-traumatic stress, and quite a few of them make movies that are trying to break our hearts as they follow men and women struggling to make sense of the sacrifices they made.

The new documentary “Bastards’ Road” is not one of those movies. Marine Corps veteran Jonathan Hancock served admirably with the 2nd Battalion, 4th Marine Regiment – nicknamed The Magnificent Bastards – in the first Battle of Ramadi in 2004. He experienced some terrible things and let his life go to hell once he returned home. It’s available now to buy or rent from iTunes, Google Play, YouTube and Fandango Now.

After seeing news reports of other military veterans who went on long hikes to highlight service-related issues, Hancock impulsively took off on a cross country ruck to visit the men he served with in Iraq and the Gold Star families of those who didn’t make it home.

Filmmaker Brian Morrison went to the same high school as Hancock and didn’t learn about his journey until the Marine was 1,300 miles into his walk. Morrison knew a great story when he saw one and contacted Hancock through mutual friends before joining him on the road.

Fortunately for the documentary, Hancock had spent a lot of time filming himself with his phone’s selfie camera as he tried to work out exactly what he was doing on this trip. The footage from those early days of the trip proved invaluable when making the final version of the movie.

The two men may not have been close before they started working together, but those local ties must’ve helped them connect because Morrison managed to get Hancock to open up in ways you wouldn’t ever expect.

The movie came to my attention when Hancock sent me an email with the subject “you missed a movie in your top ten military movies to see in 2021.” Now, it’s a fact that I get a few direct and often confrontational emails from readers pretty much every day, but there was something about how Jon pitched this film that got my attention.

The movie seems like it’s going to be an inspirational story for the Hallmark Channel at the start, but Hancock slowly comes clean about his post-service issues and behavior as the movie unfolds. Family members share incredibly painful memories of Hancock’s struggles and just how he took things out on those he loved.

How Hancock addresses this behavior with himself and how he makes amends to others in this very public forum separates this movie from other (let’s repeat) well-intentioned documentaries that want to move you with stories of redemption.

Is this Marine redeemed in the end? Yes, but not before he insists that viewers watch him rub his own face in the muck he created. This is the kind of real life that most people are afraid to put on film.

All of this led to a fascinating Zoom interview with Hancock and director Brian Morrison. What was supposed to be an occasion for a couple of nice quotes turned into a wide-ranging conversation about how the film got made, why Hancock opened up and what’s happened in his life since he completed his cross-country journey.

It’s worth bookmarking this page and coming back to watch the whole conversation after you’ve had a chance to see the movie.

Keep Up With the Best in Military Entertainment

Whether you’re looking for news and entertainment, thinking of joining the military or keeping up with military life and benefits, Military.com has you covered. Subscribe to the Military.com newsletter to have military news, updates and resources delivered straight to your inbox.