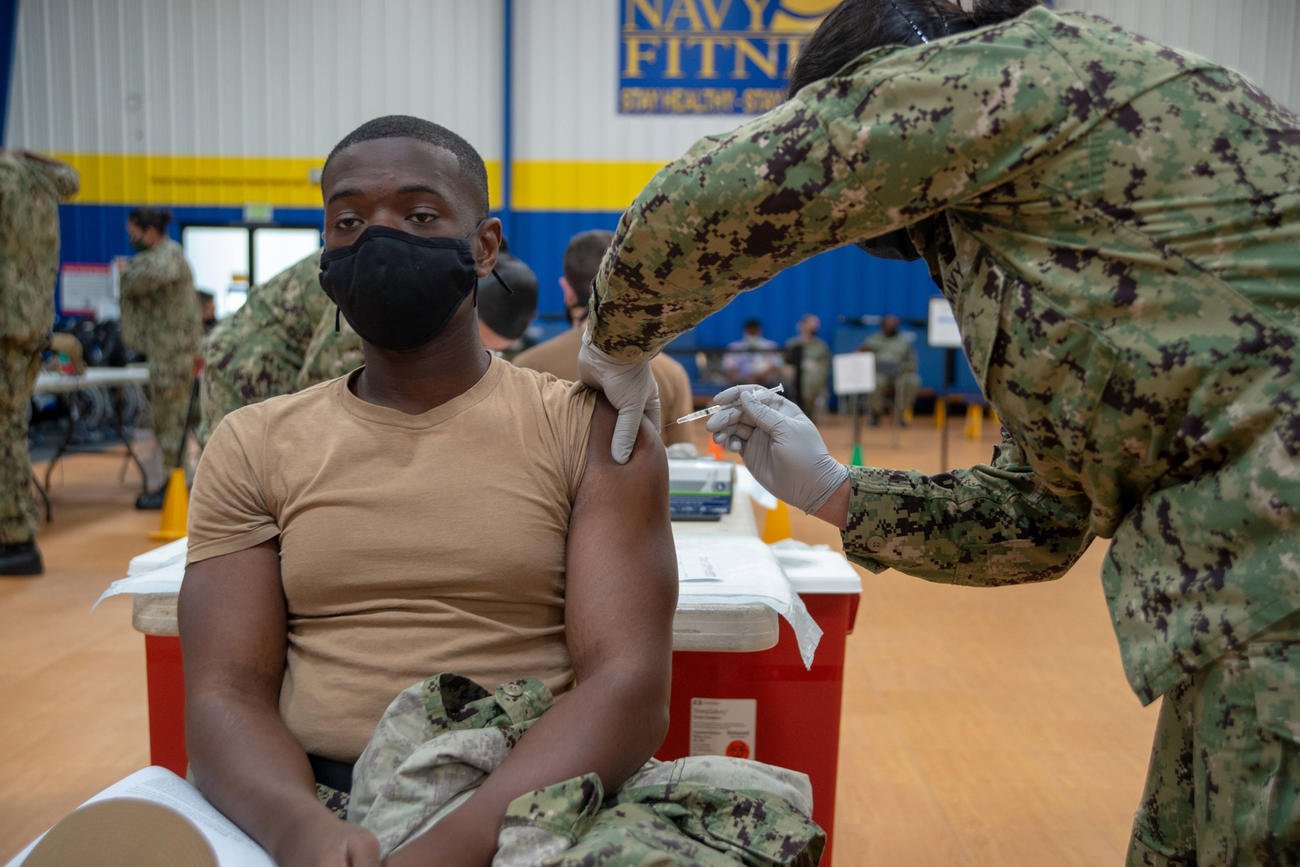 More than one-third of the U.S. military’s 2.1 million active-duty, National Guard and Reserve members have received at least one dose of a coronavirus vaccine, Defense Department officials announced Wednesday.

New data released Wednesday by the Defense Department shows that 22% of the military force is now fully vaccinated. And by service the Navy has greatly exceeded the vaccination rates of the other branches, with more than half its members, including Reserves, receiving at least one dose of the COVID-19 vaccine, and 35% of the fleet being fully vaccinated.

The Army has the lowest overall vaccination rate, with 27% of its total active, Guard and Reserve force having received one shot and 15% being fully vaccinated.

It’s not fully clear why the Navy has been so successful in vaccinating its force. But the Navy’s surgeon general, Rear Adm. Bruce Gillingham, told the Senate Appropriations Committee this week that messaging has been clear from the top of the service down about the importance of getting the shot.

“Our highest priority remains ensuring that all Department of Navy personnel have access to the vaccine in order to protect themselves, their shipmates, their families and their community,” he said. “As Navy surgeon general, I have been clear in my guidance that these vaccines are for the most effective protection against this deadly virus. The bottom line is that we are getting shots in arms and providing our personnel with what I refer to as biological body armor.”

Read Next: Speedy ‘Ambulance Ships’ a High Priority for the Navy, Admiral Says

With the exception of the Navy and the figure for those fully vaccinated in the Marine Corps, the military rates are lower than the overall rate in the U.S. population. Across the U.S., 39% of the population has received at least one dose and 25% has been fully vaccinated as of Sunday, according to data from the Centers for Disease Control and Prevention.

Defense Health Agency Director Army Lt. Gen. Ronald Place said Wednesday, however, that across the active component, nearly all combatant commands had vaccination rates that exceeded 50% of their military personnel and family members, with the exception of European Command, which has not reached the 50% mark.

Acting Assistant Secretary of Defense for Health Affairs Dr. Terry Adirim said the rates in the U.S. military might also be lower because much of the population hasn’t been eligible for the vaccine until this week.

DoD has received more than 3.2 million doses of the three available COVID-19 vaccines and has administered roughly 80% of those doses, according to the Pentagon. The doses that have not yet been distributed include the Johnson and Johnson vaccines and others that are being stored in areas where demand is lower, according to Place.

Across the military, installations are slowly reopening services including dining facilities and gyms as more individuals become vaccinated. Adirim said she didn’t want to speculate on what the “new normal” would look like, but said vaccinations and lower transmission rates could help a return to broader openings and activities.

“Certainly if more people get vaccinated, and the lower the transmission within the United States — it wouldn’t just be within DoD, because we’re all part of the same community — but at some point in time, if the virus is not transmittable, then we could get much closer to normal,” Adirim said.

As of Wednesday, the Defense Department has logged 282,166 cases of COVID-19, including 185,259 among U.S. service members. Nearly 350 people, including 24 troops, 229 civilian employees, 12 dependents and 79 contractors, have died from the coronavirus.

In addition to the service members, 321,794 DoD civilian employees have received at least one dose of the vaccine, according to the Pentagon.

Place said that with the Johnson and Johnson vaccine pause, DoD is working to get more Moderna vaccine doses to U.S. forces in Europe and believes that by June, up to 80% of those in European Command, including family members, will have access to a vaccine.

“We have great empathy for our service members and families deployed overseas, because they do not have the same options as here in the United States to receive vaccines in their local communities,” Adirim added. “We’re committed and working diligently to ensure that they can get the vaccine if they choose it.”

Related: For Now, U.S. Troops Won’t Be Required to Get the COVID-19 Vaccine