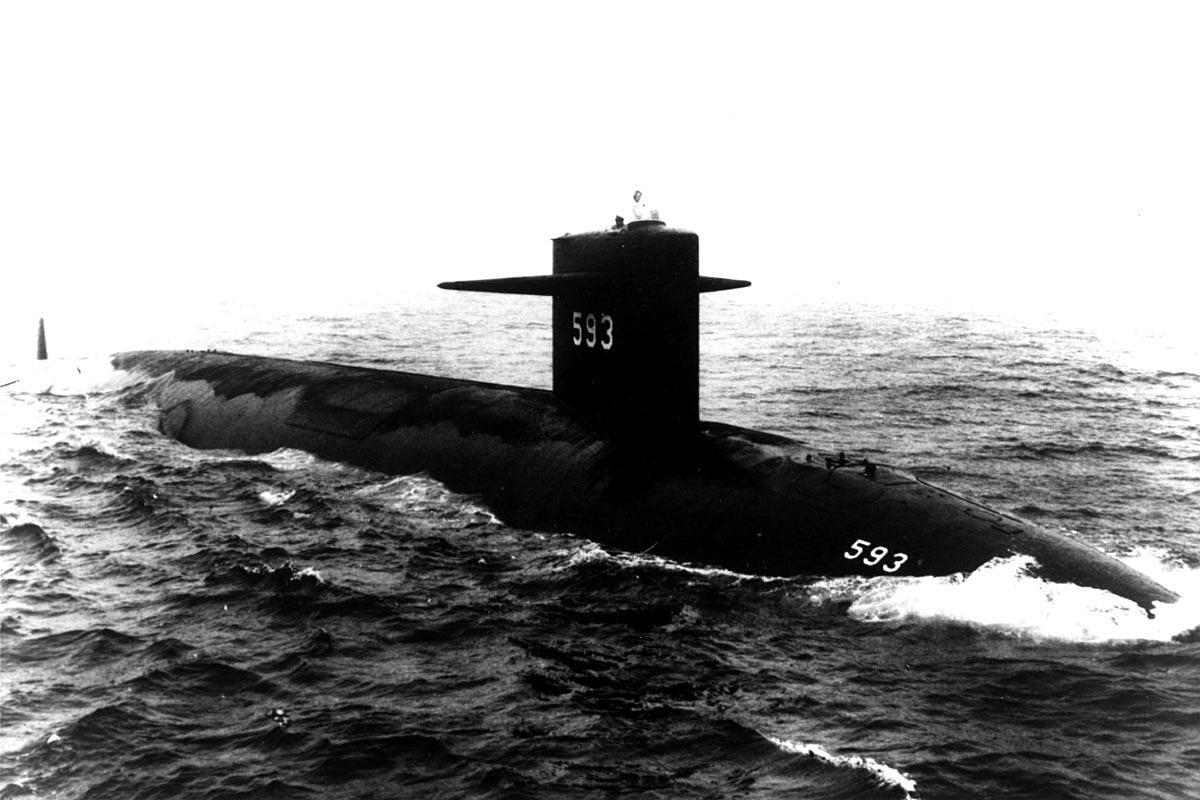 It’s all in a binder thick with certificates, patches, official correspondence and photographs, each page sheathed in protective plastic.

He’s written his obituary, too, along with a list of who should be notified when he dies; some passages that should be spoken at his wake (and who should speak them); and instructions about how his ashes should be spread over a certain expanse of the Atlantic Ocean.

Apparently, 58 years of survivor’s guilt can make a person do such things.

Above all else, Cornell was — no, forever “is,” he’s quick to point out — a submariner. A machinist’s mate, he served on four submarines between 1956 and 1966, a “cold warrior” with many a tale to tell.

It’s the story about the boat he almost served on and the buddy who drew the assignment instead that haunts him.

“I’ve been thinking a lot about Bob Gaynor these days,” Cornell said last week during an interview in his Cow Hill Road home. “When Bob came on board the Seadragon, we clicked. He was a bit on the wild side, but what sailor isn’t?”

Both men, Boston-area natives, served on the USS Seadragon (SSN-584) from 1959 to 1961. Before the submarine left the Portsmouth Naval Shipyard in Kittery, Maine, on a historic 1960 mission to the Pacific via the Northwest Passage, they got fresh orders.

Robert William Gaynor was among the 129 people — 112 Navy personnel and 17 civilians — who perished April 10, 1963, when the USS Thresher (SSN-593) sank during deep-diving exercises some 220 miles east of Boston. Bits of debris were recovered from the ocean floor, and photographs showed that the Thresher had broken up in 5,500 feet of water. Only last year, the Navy, prompted by a lawsuit, began releasing records of a Court of Inquiry into the sinking, which concluded a welding failure had led to the flooding of the Thresher’s engine room and the eventual shutdown of the submarine’s nuclear reactor.

Cornell speculates that his being “nuclear qualified” kept him assigned to the Seadragon when Gaynor, part of the “auxiliary gang,” was transferred to the Thresher.

At the time of the tragedy, Cornell was serving on the USS Barb (SSN-596). He thought instantly of Gaynor when he heard the news.

He recalled that Gaynor’s nickname was “Mitzi,” the name of the actress with the same surname as Gaynor who starred in the movie version of “South Pacific,” which was popular at the time.

“He was like a brother to me,” Cornell said.

Eschewing computers and cellphones, Cornell has never tried to research Gaynor’s legacy. A website dedicated to the Thresher and its crew says Gaynor was survived by his widow and three children.

Cornell had four sons with his first wife, Sandra, who died in 1994. They bought a house in North Stonington in 1964 and lived there for decades. After leaving the Navy, Cornell went to work for Pratt & Whitney and retired in 1992. In 1996, he married his wife JoAnn.

His binder contains copies of newspaper articles about Thresher memorials, including one Cornell attended in 2013 at Mitchell College in New London on the 50th anniversary of the Thresher’s sinking. Other clippings give accounts of Navy burials at sea of those with connections to the Thresher crew.

In April 2015, the cremated remains of Irene Harvey, wife of the ill-fated submarine’s commanding officer, Lt. Cmdr. John “Wes” Harvey, were laid to rest in the area where the Thresher was lost, as she had requested. In 2016, a similar honor was accorded Capt. Paul “Bud” Rogers, a native Pennsylvanian who up until the last minute was supposed to be on board the Thresher’s last cruise and whose will requested he be buried at sea.

Rogers felt survivor’s remorse much of his life, his wife said at the time.

Cornell has written a speech he hopes to deliver at services marking the 60th anniversary of the Thresher sinking in 2023. He figures such events are likely to take place in Kittery, Maine, and elsewhere.

“I am David T. Cornell and I am a submariner,” the speech begins.

It expresses Cornell’s wish that he “be cremated and ashes transported by a naval submarine, to be spread over the water where the Thresher was lost to join Rober Gaynor and all my fellow submariners …”

This article is written by Brian Hallenbeck from The Day, New London, Conn. and was legally licensed via the Tribune Content Agency through the Industry Dive publisher network. Please direct all licensing questions to legal@industrydive.com.

© Copyright 2021 The Day, New London, Conn.. All rights reserved. This material may not be published, broadcast, rewritten or redistributed.