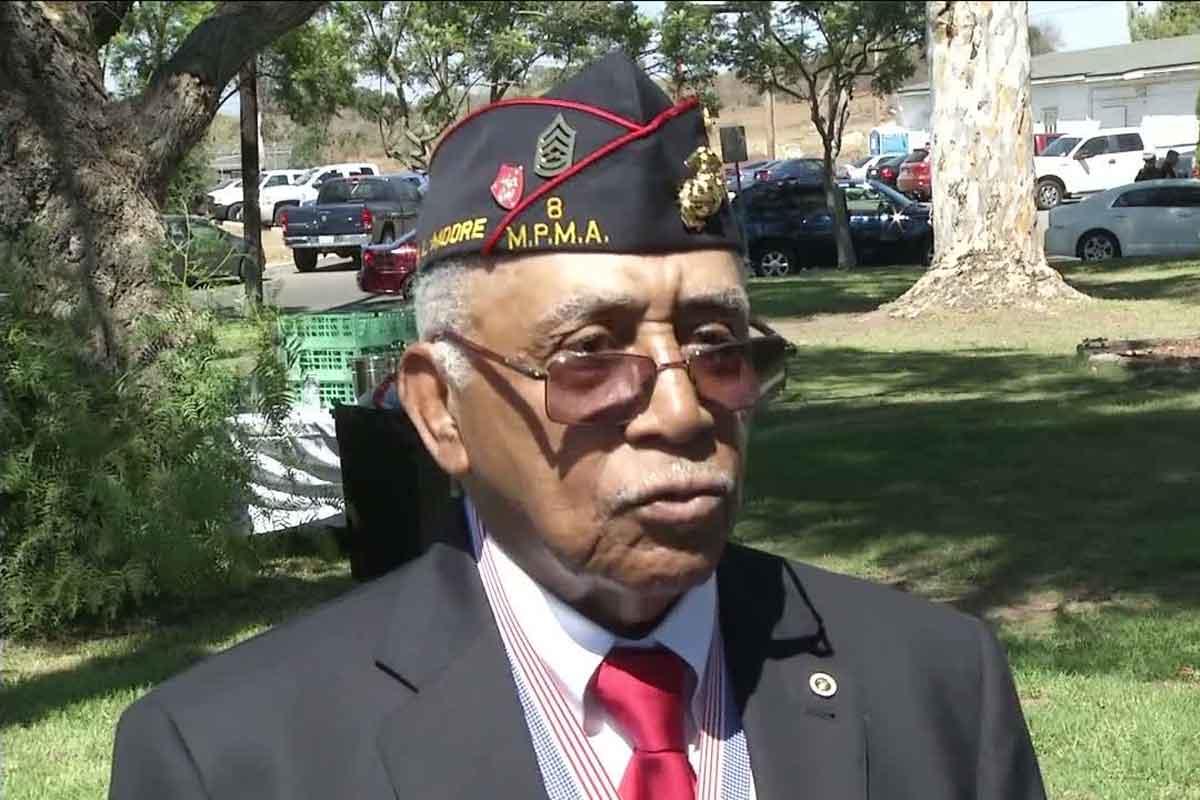 In 1946, Robert L. Moore was stunned to see two Black Marines in uniform walking down the street near his home in North Carolina.

Those men were Montford Point Marines, who were the first Black men to serve in the U.S. Marine Corps. Beginning in August 1942, about 20,000 Black men — including Moore, who rushed to enlist after seeing the men — trained at the segregated Camp Montford Point in Jacksonville, N.C. The camp was decommissioned in 1949 when President Harry Truman desegregated the armed forces. Today, fewer than 400 of these men are believed to survive, and last month their number fell by one more with Moore’s death.

In the early morning hours of Feb. 25, the 91-year-old Moore passed away peacefully at his Oceanside home following a weeklong hospitalization for COVID-19. He died surrounded by family members, including his granddaughter Trina Lloyd, who said Moore stopped breathing just a few minutes after family members prayed with him, told him they loved him and said if he was tired it was OK for him to let go.

“All I can say is that he lived a good life, full of adventure,” Lloyd said. “My grandfather was very modest. He didn’t think he was anything special, but he really was an extraordinary man.”

Moore, who served in both the Korean and Vietnam wars, was the last surviving Montford Point Marine in San Diego County. His death followed that of J.T. Inge of San Diego, who died last year on Oct. 24, according to Gerald Hampton, who is president of Chapter 44 of the National Montford Point Marine Association.

Hampton, who served in the Marines from 1976 to 1996, said he had great respect for Moore, who he will remember for his sense of humor, his spryness and independence and his non-nonsense, straight-shooting way of talking. Before the pandemic arrived, Moore drove himself to all of the chapter’s monthly meetings and was always the first to arrive.

“As an African-American Marine myself, I’m very cognizant of the fact that we stand on the shoulders of giants,” Hampton said. “I can only imagine all of the things those Montford Point Marines would have gone through, so I personally hold them in high esteem.”

In 2011, at the request of then-Marine Commandant James F. Amos, President Barack Obama authorized the award of a collective Congressional Gold Medal for all Montford Point Marines. Fewer than 10 percent of the original Montford Point Marines have received their bronze replica medal. Moore was a proud recipient.

Robert Lee Moore was born in 1929 at a Catholic hospital in Queens, N.Y., to a White, possibly immigrant mother. When the nuns at the hospital saw the baby’s dark skin, they quietly gave him away to a Black domestic worker named Mary Grace Moore who had recently moved to New York from North Carolina, looking for work. No birth certificate or adoption papers were ever filed. Mary Grace named her son, Robert, and gave him her own birthday, Aug. 13.

To keep her son out of trouble in his teens, Mary Grace sent Robert to live with her mother in North Carolina, where, in 1946, he enlisted in the Marines. In a 2019 interview, Moore said the enlistees in boot camp at Montford Point were often subjected to racist attacks by White Marines from nearby Camp Lejeune. Because of his light skin, Moore said he was often the odd man out with colleagues.

“The white guys saw me as Black but the Black guys thought I was too White,” he said. “There was a lot of racism but I let that roll off my back. The guys I worked with were fine, but some of the brass didn’t like me much.”

After finishing basic training, Moore was assigned to food service operations at Camp Lejeune and a year later, he was transferred to Camp Pendleton near Oceanside, where he would spend more than four decades.

In 1951, Moore was shipped to Korea for 16 months, where he ran a field kitchen near the battle lines in the Korean War. He cooked by day and slept with a rifle by night because the North Korean and Chinese soldiers always attacked after dark. Every evening, he would load sticks of explosives into the camp stoves to turn them into makeshift bombs if the enemy ever got too close.

“My grandfather said sometimes he’d be breaking down the mess hall after a long shift and a soldier who had just come off duty would wander in hungry,” Lloyd said. “They’d set every thing back up again to fix him a fresh meal and stay there until he drank his last cup of coffee. They wanted him to have good home cooking that would stick to his ribs, since nobody knew when they’d get their next meal, or if it would be their last.”

Moore later served in Sasebo, Japan, before returning to Southern California where he became a trainer for Marines in food service. He spent three years in the 1960s running a mess hall on the Navy amphibious assault ship USS Princeton. His final tour of duty was in Vietnam. Moore retired from the Marine Corps at the rank of gunnery sergeant in 1972. Then, after earning a degree at Palomar College, he returned to Camp Pendleton where he worked another 20 years as a dietetic technician at the base hospital.

Before moving to Camp Pendleton in 1948, Moore married his sweetheart Willie Mae Miles, who was a secretary. They had 11 children and were married 56 years before she died in 2004. Lloyd said Moore was a loving husband, father and grandfather who often worked two to three jobs to ensure his family wanted for nothing.

A wake for Moore will be held from 5 to 8 p.m. March 24 at Oceanside Mortuary at 602 S Coast Highway in Oceanside. He will be buried at 10:30 a.m. March 25 at Riverside National Cemetery.

Joe Geeter with the National Montford Point Marine Association said that efforts remain under way to find survivors who have yet to receive their replica medals. Survivors seeking medals are invited to contact the association at montfordpointmarines.org.

This article is written by Pam Kragen from The San Diego Union-Tribune and was legally licensed via the Tribune Content Agency through the Industry Dive publisher network. Please direct all licensing questions to legal@industrydive.com.

© Copyright 2021 The San Diego Union-Tribune. All rights reserved. This material may not be published, broadcast, rewritten or redistributed.

Navy Bows Out of War Artifacts Dispute Between Minneapolis, Minnetonka
4 Things Military Members Should Look for When Renting an Apartment