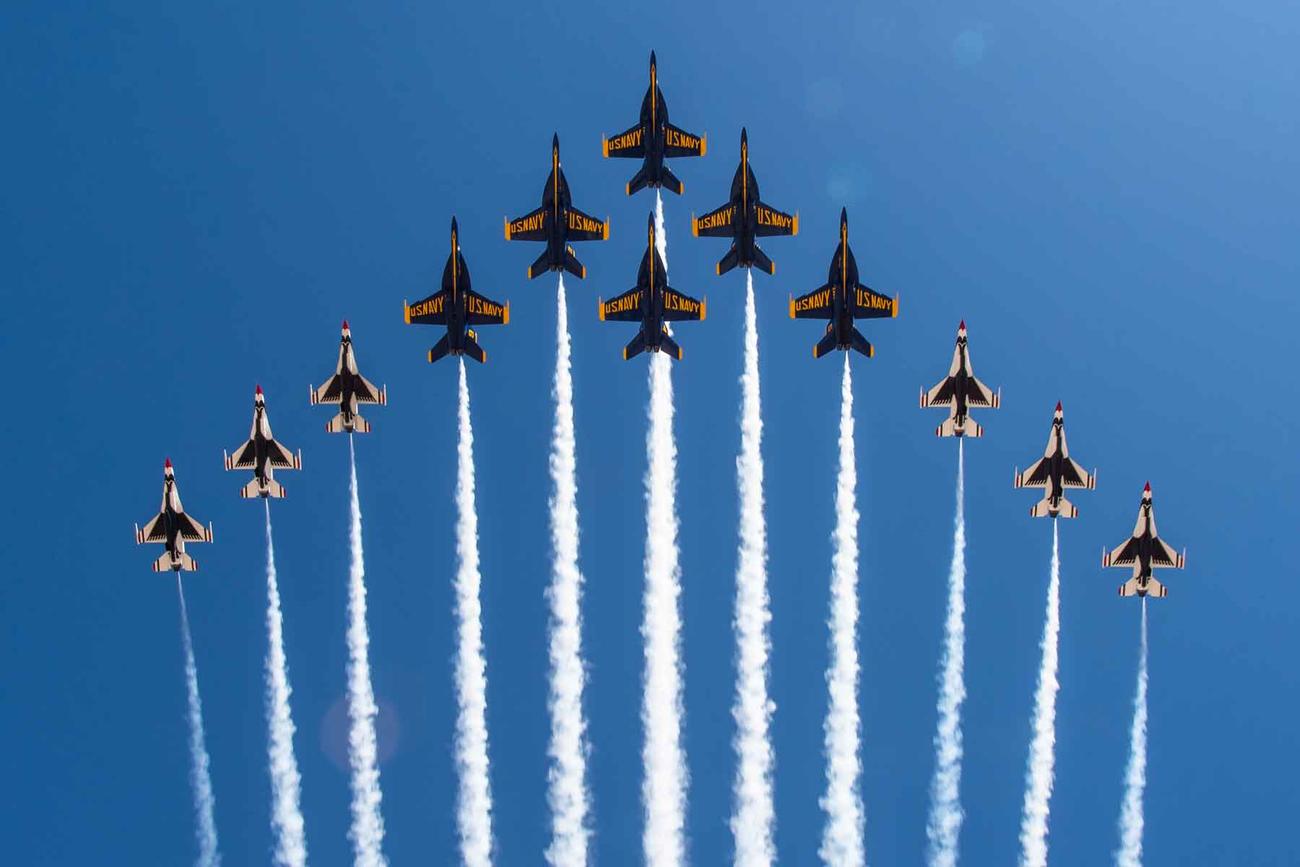 The Navy and Air Force‘s flight-demonstration squadrons gave a sneak peek at a brand-new formation the teams will debut when they perform together Memorial Day weekend.

Six F/A-18 Super Hornets from the Navy’s Blue Angels and six F-16 Fighting Falcons from the Air Force’s Thunderbirds flew together Tuesday in a formation dubbed “Super Delta.” The six Hornets formed a tight triangle and were flanked by three Fighting Falcons on each side.

Photos of the aircraft flying in the new formation were shared by the teams. They flew over Naval Air Facility El Centro in California as they trained together.

The formation grew out of a series of joint training events between the two teams in support of flights honoring frontline workers, said Air Force Capt. Mesha “Flare” Nelson, a spokeswoman for the Thunderbirds.

The teams worked together to make sure the F/A-18s and F-16s were able to fly alongside one another at a safe distance while in close proximity, Nelson added.

“The teams created common terms that would allow the flight leaders to effectively communicate with each other and within their own formations,” she said in an email. Common verbal commands and cues were needed because the teams use different lexicons when conducting day-to-day flight operations, she explained.

Working together also sharpens the pilots’ flying skills prior to the start of the teams’ monthslong show seasons, Nelson added.

Seeing the Blue Angels and Thunderbirds perform together is still a unique experience. The teams didn’t perform together for more than a decade until they linked up for the 2019 “Legends in Flight” air-and-space show at Joint Base Andrews in Maryland.

Last year, the teams performed together during the “America Strong” flyover campaign in honor of workers responding to the global pandemic. The Thunderbirds and Blue Angels flew over thousands of hospitals in 31 cities around the U.S., Nelson said.

The “Super Delta” formation debut will be part of the National Memorial Day Parade: America Stands Tall, which Nelson said will be broadcast on ABC, NBC, CBS and Fox affiliates May 29 through 31.

Members of the teams hope the new, joint formation will serve as a symbol of the teamwork, discipline and skill servicemen and women deployed across the globe display daily.

“We hope the display instills a sense of pride, confidence and support for those who have served past and present, honors those who have sacrificed for this country and reassures Americans that they have the greatest force on the planet,” Nelson said.