Navy Will Make COVID-19 Vaccination Mandatory ‘As Soon as We Can:’ 3-Star Admiral 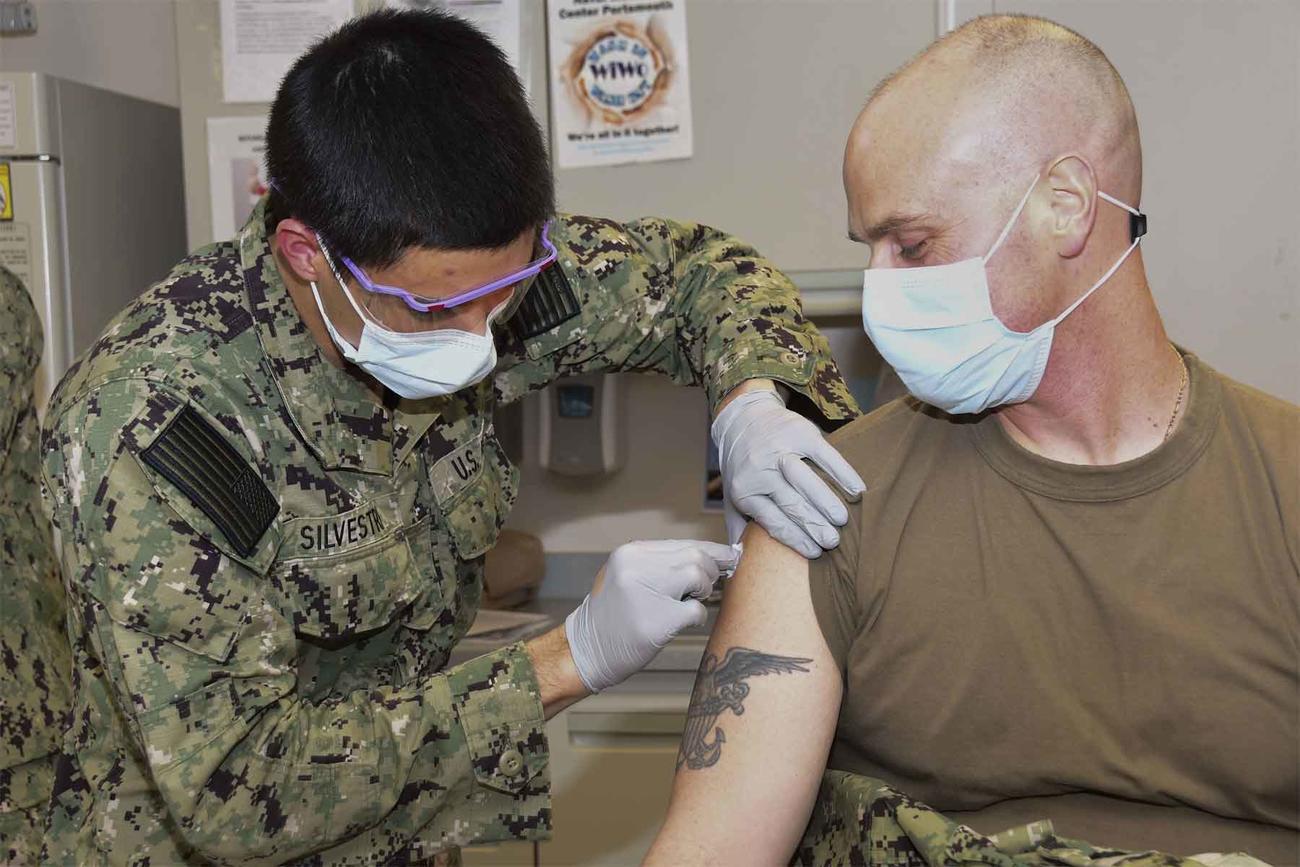 Thousands of Navy personnel are about to receive the first dose of the coronavirus vaccine ahead of an upcoming deployment — and while sailors aren’t required to take the shot yet, they soon could be.

Members of the Dwight D. Eisenhower Carrier Strike Group will get the option to receive the first dose of the vaccine for COVID-19, the sometimes-fatal illness caused by the coronavirus, on Saturday. So far, about 80% of the crew — roughly 5,000 strike group members — say they intend to get the shots, Vice Adm. Andrew Lewis, U.S. Second Fleet commander, told reporters Friday.

Service members are required to undergo a host of immunizations. In the future, the one for the virus that caused a global pandemic, killing more than 2.3 million worldwide — including 21 U.S. troops — will likely be among them.

Defense Department officials have previously said that the COVID-19 vaccine would remain voluntary while it’s under emergency-use authorization by the Food and Drug Administration. That designation is expected to last up to two years while the FDA assesses the vaccination’s efficacy and side effects.

The Navy was the military service perhaps hit hardest by the coronavirus pandemic, since social distancing can be difficult in tight quarters aboard ships and submarines. One aircraft carrier, the Theodore Roosevelt, was sidelined for months last year when coronavirus cases multiplied among crew members.

The Eisenhower Carrier Strike Group members who take the vaccine this weekend will get their second dose in four weeks and will be “well on their way to full immunization in about six weeks’ time,” Lewis said. But even with about 80% of the strike group inoculated, crews will continue following safety measures the Navy put in place on ships during the pandemic, including mask-wearing, social distancing and no port-call stops.

Capt. Laurence Kuhn, the force medical officer for Naval Air Force Atlantic, said that while most people who gathered to brief reporters about the Ike’s vaccination plans received both COVID-19 shots, they still spread out and wore masks.

“We’re going to maintain that posture for quite some time,” he said.

Most of Ike’s crew is receiving the Moderna version of the COVID-19 vaccine for storage reasons, said Rear Adm. Doug Beal, vice commander of U.S. Fleet Forces Command and the Fleet Vaccination Cell lead. That version of the vaccine doesn’t need to be stored in temperatures as cold as the Pfizer shot requires.

Lewis and other Navy officials acknowledged that some sailors and their families still have reservations about the new vaccine. Vaccines typically take years to develop. The one for COVID-19 was created in about 10 months.

Military.com reported earlier this month that more than half of a group of 810 polled military family members said they weren’t planning to get the vaccine, citing safety concerns and suspicions over development.

Lewis said he was eager to get the vaccine, which he said will help the Navy get back to normal. The admiral had his second dose about two weeks ago, and hasn’t had any lingering side effects. He said he ran a 50k the next day, more than 30 miles.

Beal said he felt “a little bit out of it” for a few hours after taking the second dose of the vaccine.

Medical experts have warned that the second dose of the vaccine could make recipients temporarily feel ill since their bodies are producing antibodies to fight off the virus in the future. The Navy plans to stagger the second doses for the Eisenhower strike group’s crews.

Air crews in particular, Beal said, have been instructed not to fly for 72 hours after receiving their vaccination, so they will “meter” the doses in a smart way.

The Navy has reached the point at which it can not only vaccinate units immediately about to head out on deployments, Lewis said, but those preparing to do so, too.

“We’re actively pushing that right now with the other aircraft carriers,” he said.

Kuhn said he felt a sense of hope for the future when getting his vaccine that the Navy — and the country — won’t be in the same spot six months from now that it has been for the last year.

Beal called the decision for sailors and Marines to take the vaccination “a selfless act.”

“It’s an act that benefits the entire group — not just the individual,” he said. “And I like to think that our sailors and our Marines are all about doing something that’s above themselves. I’m hoping that so many more of them will make the decision to get vaccinated to get immunized and to help their fellow sailors and Marines by doing that.”

— Patricia Kime contributed to this report.