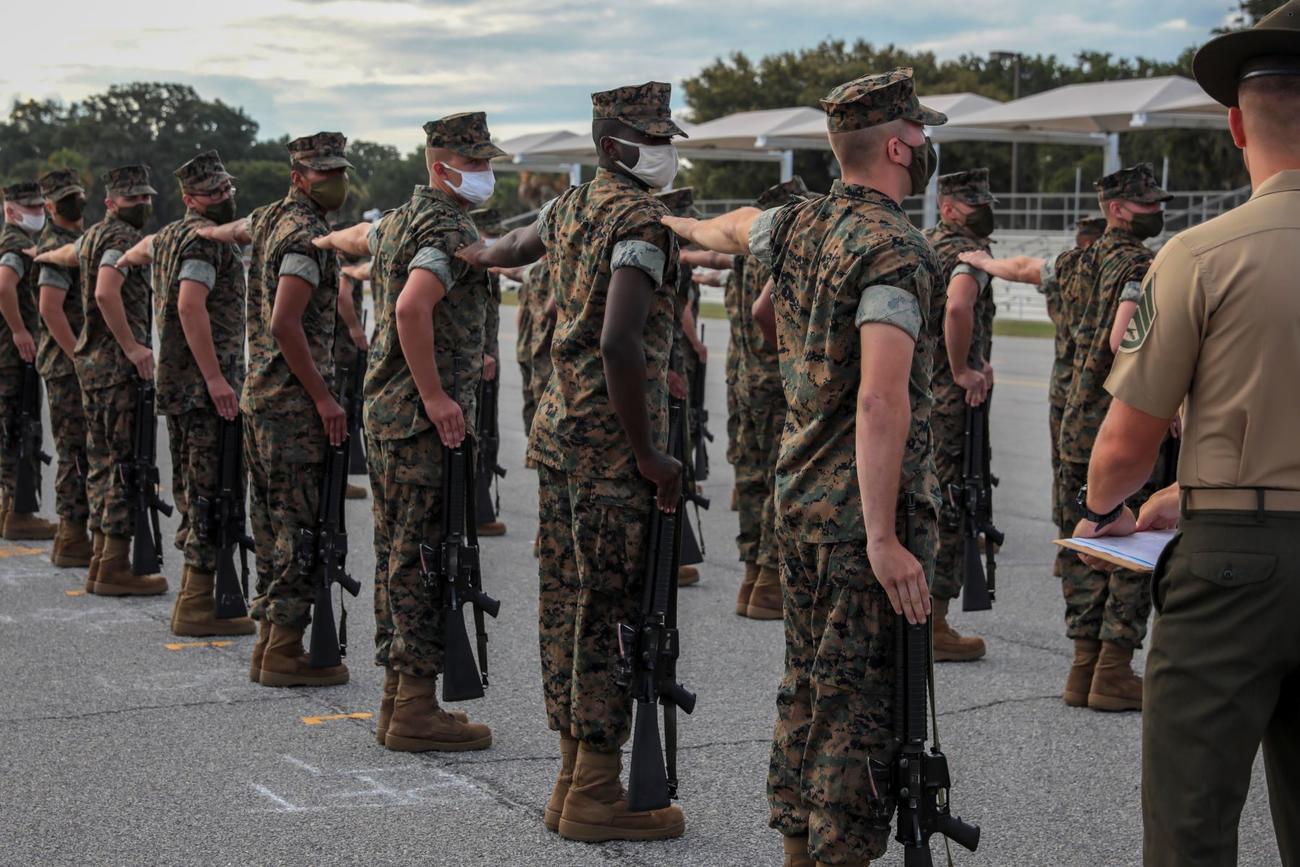 A year after a Marine drill instructor was sentenced to 10 years behind bars for hazing Muslim recruits, throwing one in an industrial dryer and figuring in another’s death, data shows that nearly nine out of 10 hazing reports in the military still came from within the Corps.

An annual report on hazing within the military, obtained via a public-records request, shows that the Marine Corps, the smallest Defense Department service by population with the exception of Space Force, owns the lion’s share of hazing complaints and substantiated hazing incidents. The data, from fiscal year 2018, shows that 256 of 291 total hazing complaints that year, more than 88%, were made in the Corps, and 91 of 102 substantiated hazing incidents took place among Marines.

The data, released to Military.com this month, provides what could be a troubling snapshot taken shortly after the Marines faced national scrutiny over hazing episodes at boot camp in Parris Island, South Carolina. Recruit Raheel Siddiqui reportedly jumped to his own death in 2016 from the third floor of a Parris Island building after abuse at the hands of a drill instructor, who received 10 years for maltreatment and other crimes at a Parris Island court-martial. Other Marines who trained recruits were found to have inflicted chemical burns requiring skin grafts — the result of forced physical training on a bleach-covered floor — and ordered naked trainees to run back and forth, then jam together against the walls of a shower.

In all, eight drill instructors faced some level of punishment over the Parris Island hazing scandal amid national attention, and investigations resulted in a slew of recommendations for change. And that same year, a crackdown on hazing within 1st Marine Division in California resulted in at least 18 Marines getting kicked out of the Corps, and 30 spending time in the brig.

But some say the information paints a more complicated picture: one of a service that is aggressively tracking abusive behavior while others overlook the problem.

The 2018 report is the first-ever Pentagon-wide survey of hazing. It was mandated by then-Defense Secretary Jim Mattis earlier the same year as part of a sweeping new policy implemented to deter harassment and abusive behavior in every form within the ranks. Mattis’ order, building on a previous 2015 memo from then-Deputy Defense Secretary Robert Work, set a Dec. 31, 2018, deadline for services to turn over the first 18 months of hazing data they’d collected, and required annual reports to follow.

The order also set a definition for hazing: a “form of harassment that … physically or psychologically injures, or creates a risk of physical or psychological injury … for the purpose of: initiation into, admission into, affiliation with, change in status or position within, or a condition for continued membership in any military or DoD civilian organization.”

The newly obtained report does not contain details on specific hazing incidents or complaints, but does break substantiated episodes into categories: physical, psychological, written, verbal and nonverbal.

In the Marine Corps, 60% of hazing incidents were physical and 32% verbal, with the remainder nonverbal. The other services had a similar breakdown; only the Navy had substantiated episodes of psychological hazing, with six incidents.

While the report doesn’t indicate the origin of hazing complaints or the dates they were made, it does contain some information on when hazing happens and who it happens to.

Unsurprisingly, almost all substantiated hazing happened on duty in 2018. Nearly 100% of military hazing victims were junior enlisted service members, in the ranks of E-4 and below and, with few exceptions, under the age of 25. While most of the perpetrators were also junior enlisted, some 20% were E-5s and E-6s, and eight offenders were senior enlisted troops or junior officers.

Within the entire Defense Department, only eight of the troops who reported being hazed were female.

While the majority of hazing offenders and complainants were white, the data does fall somewhat short. There’s no indication of the racial breakdown of victims and offenders in specific incidents, or what conditions lead to certain kinds of hazing. There’s no information, either, to indicate the severity of hazing incidents or their short- and long-term impact on victims.

What does seem evident, though, is that the 2018 data regarding the ratio of hazing reports by service is not an anomaly. A data sketch from fiscal 2017 also obtained by Military.com shows 233 out of 299 hazing reports that year came from the Marine Corps, and 109 out of 136 substantiated incidents occurred in that service.

While DoD did not release fiscal 2019 data, and a fiscal 2020 report has not yet been provided to the services, Marine Corps officials did provide data showing that reports of hazing decreased markedly within the service in 2019. That year, there were 188 total complaints in the Corps, and 47 substantiated hazing cases, officials said.

“Hazing has no place in a disciplined and professional military force and is not tolerated in any form in the Marine Corps. Hazing degrades our warfighting capabilities by destroying our Marines’ confidence and the trust they place in their fellow Marines and in their leadership. All complaints of hazing are taken seriously,” Yvonne Carlock, a spokeswoman for Marine Corps Manpower and Reserve Affairs, told Military.com.

Carlock added that all hazing complaints are tracked “from the initial complaint/allegation through adjudication” and that the service stresses bystander intervention and urges Marines and sailors to report all hazing they observe.

A 2015 study by the Rand Corporation did find that the Marine Corps was the most consistent of any service apart from the Coast Guard at providing specific anti-hazing training and offering additional training at various career intervals, with annual refreshers. Gaps were still present at that point, however; the report found anti-hazing instruction in the Corps was lecture-only and lacked group discussion and structured assessment.

But the grim wake-up calls from the recent high-profile hazing incidents may mean the Marines track the issue better and more consistently than other services. That’s the contention of Rep. Judy Chu, a California Democrat who has made it a priority to end military hazing and increase accountability.

Chu’s nephew, Marine Lance Cpl. Harry Lew, took his own life during a deployment to Afghanistan in 2011 following hazing by his peers. Three Marines faced criminal charges in the wake of his death; two were acquitted and one was sentenced to 30 days in a plea agreement.

“The real truth is that hazing in the military is still obscured by bad and incomplete data,” Chu told Military.com in a Feb. 5 statement. She cited a Government Accountability Office report she had required showing that, as of early 2016, the Corps alone consistently tracked both substantiated and unsubstantiated hazing reports.

“This doesn’t mean that the Marines are more likely to have a hazing problem, but that the other branches fail to report theirs,” she said in the statement. “Still, what this troubling data reveals is that hazing and disunity are still pervasive problems in our military, which is bad for our national security and the health and safety of the men and women in uniform who risk everything for us.”

It’s likely, however, that culture also plays a role in the picture the data shows. The Marine Corps has the youngest average age of any service, the most male and the most junior in rank. The service prides itself on being the most physically demanding, as well, and many recruits arrive at boot camp with a perception of the Corps informed by films like Full Metal Jacket and A Few Good Men — movies in which brutal Marine Corps hazing incidents are main plot points.

In one notional example underscoring their research, they profile “Darrius Ima,” a Marine Corps drill instructor who himself was hazed as a recruit and believes he’s justified in passing down the tradition.

“Darrius believes, not only that there is a low probability of him being caught and reprimanded for the hazing but also that, and erroneously so, that the majority of the Marines community values hazing,” the authors write. ” … In sum, Darrius is morally disengaged around the issue of hazing. He tries to justify his conduct by offering a purely positive rationale for hazing — e.g., that it builds bonds.”

Parks, a professor of law at Wake Forest University and expert on all kinds of hazing who spoke to Military.com Feb. 5, said changing a cultural perspective on an issue such as hazing can be a lengthy process.

“Organizational culture is crucial,” he said. “What are the dynamics at play within an organization over the course of maybe decades or generations, and why is it hard to disentangle that. It makes it very difficult to swim upstream and buck the system when you receive a lot of critical feedback from peers.”

He added that the military, and particularly the Marine Corps, which demands and prizes high levels of physical prowess and mental toughness, may be more prone to training and rituals that cross the line into hazing.

“There are these physical components, but there’s also the psychological aspect of putting people through the paces,” he said. “It’s probably easier to amplify that.”

The newly obtained data does indicate that being found to have hazed a peer or subordinate will affect a service member’s career, even if it doesn’t end it. For fiscal 2018, 100% of substantiated hazing offenders received some sort of discipline.

In the Marine Corps, 174 perpetrators received a total of 365 corrective or disciplinary actions. One-third of all disciplinary actions for Marines were at the administrative level, and a little more than half consisted of non-judicial punishment. Unit-level punishments are shielded from public release, and therefore difficult to track.

Some 44 Marines faced hazing-related charges at various levels of court-martial; the Corps was the only service to send anyone to court-martial over hazing.

“We continue to train and educate all Marines and instill in them that these behaviors are inconsistent with our core values and we will hold perpetrators accountable,” Carlock, the Marine Corps spokeswoman, told Military.com. “A failure to act and respond is not only inconsistent with who we are but it also degrades our traditions, threatens our cohesion and morale, and detracts from mission accomplishment.”