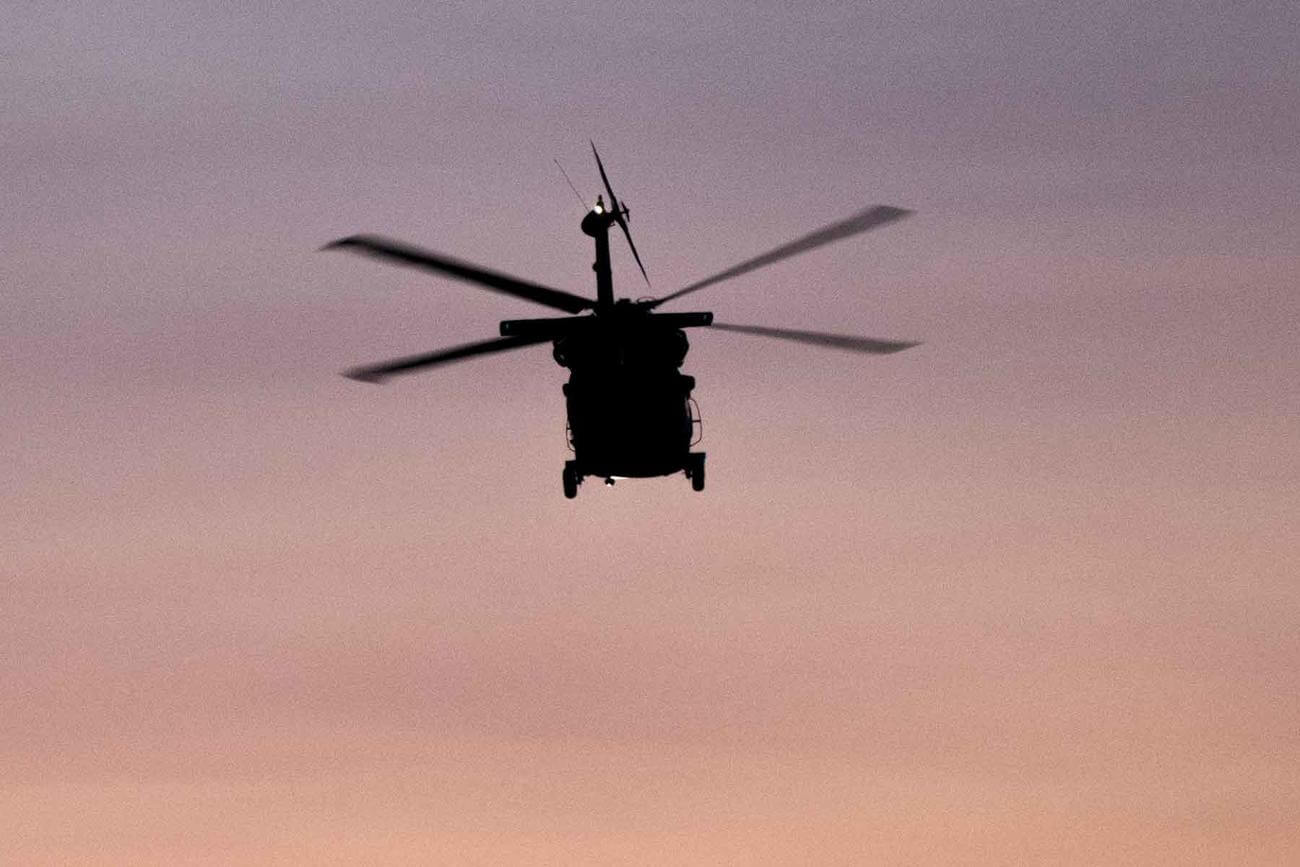 The Idaho Army National Guard announced Wednesday that it has suspended flight operations after one of its UH-60 Black Hawk helicopters crashed Tuesday night in bad weather, killing all three pilots aboard.

“As of right now, our flight operations have ceased,” Lt. Col. Nicole Washington, commander of the Idaho Guard’s 1st Battalion, 183rd Aviation Regiment, told reporters Wednesday afternoon. “We can’t speculate; we don’t know the cause of the accident, whether it was weather-related, maintenance-related or something else happened. At this point, there is a lot unknown.”

The three pilots, whose identities have not been released, took off from Gowen Field in Boise, Idaho, at approximately 6:50 p.m. to conduct a routine training mission in the Nap of the Earth Training Area, where pilots practice low-level flying, according to Col. Christopher Burt, the Idaho Guard’s state aviation officer.

The crew checked in several times with the flight operations center during the flight; their last contact occurred at 7:45 p.m., Burt said. Shortly after 8 p.m., the Air Force Rescue Coordination Center located at Tyndall Air Force Base, Florida, contacted the Idaho Guard to say it had received an active emergency locator transmitter signal from the aircraft.

Two of the aviators were instructor pilots, and one was a “fairly experienced” pilot, Washington said, describing how the aircraft was returning from its training mission.

She said the Guard had received no distress call.

“There was no mayday,” Washington said. “There was weather last night. There was snow.”

Another Idaho Guard Black Hawk flying in the area attempted to search for the crash site in the mountainous terrain, but the rapidly deteriorating weather forced it to return to base, Burt said.

“For us, the training is extremely important. … Search and rescue is one of the many versatile missions we are able to accomplish quite frequently, so it’s important for us to go out and train to standard and train to be able to operate in adverse conditions,” she said, adding that all three pilots were experienced at flying in bad weather.

The pilots were wearing night-vision goggles, she said. ‘[But] last night even with their goggles, illumination was pretty low, so it would be a lot more difficult … with bad weather, snow, precipitation.”

The Idaho Guard conducts a detailed risk assessment to consider weather and other factors before any flying mission is approved, Washington said.

“There were forecasted showers in the area, and again from what we know now from when they called back to Boise, the weather had started to slowly deteriorate,” she said. “Sometimes out in the backcountry, it can start to deteriorate pretty quickly.”

A unit from the 160th Special Operations Aviation Regiment that was in the area training was scheduled to fly an MH-47 Chinook out to the crash site Wednesday to assist in the recovery of the pilots’ remains.

The Army Aviation Safety Center at Fort Rucker, Alabama, has sent an investigation team, which is scheduled to arrive in Boise on Thursday, Burt said.

“The sudden and tragic loss of three of our fellow Guardsmen is extremely heartbreaking,” Maj. Gen. Michael Garshak, adjutant general of Idaho and commander of the Idaho National Guard, said at the news conference.

Washington said she knew the pilots personally, adding that their loss “leaves a tremendous, indescribable void.”

“They were an intricate and necessary part of our community, and they will be missed,” she said.

It’s unclear how long flight operations for the Idaho Guard will be suspended, Washington said.

“Going forward, we will eventually have to get back to flying once we are cleared,” she said. “Certainly, anytime an incident occurs, we take a step back and pause to allow internal reflection on whether it’s adverse conditions, weather conditions, what we can do better going forward.

“As an organization, we will look at everything we can do to improve anything we could have done differently to reassure not only our aviators, but our aircrew members, all of our soldiers and their families that we are doing things as safely as possible.”