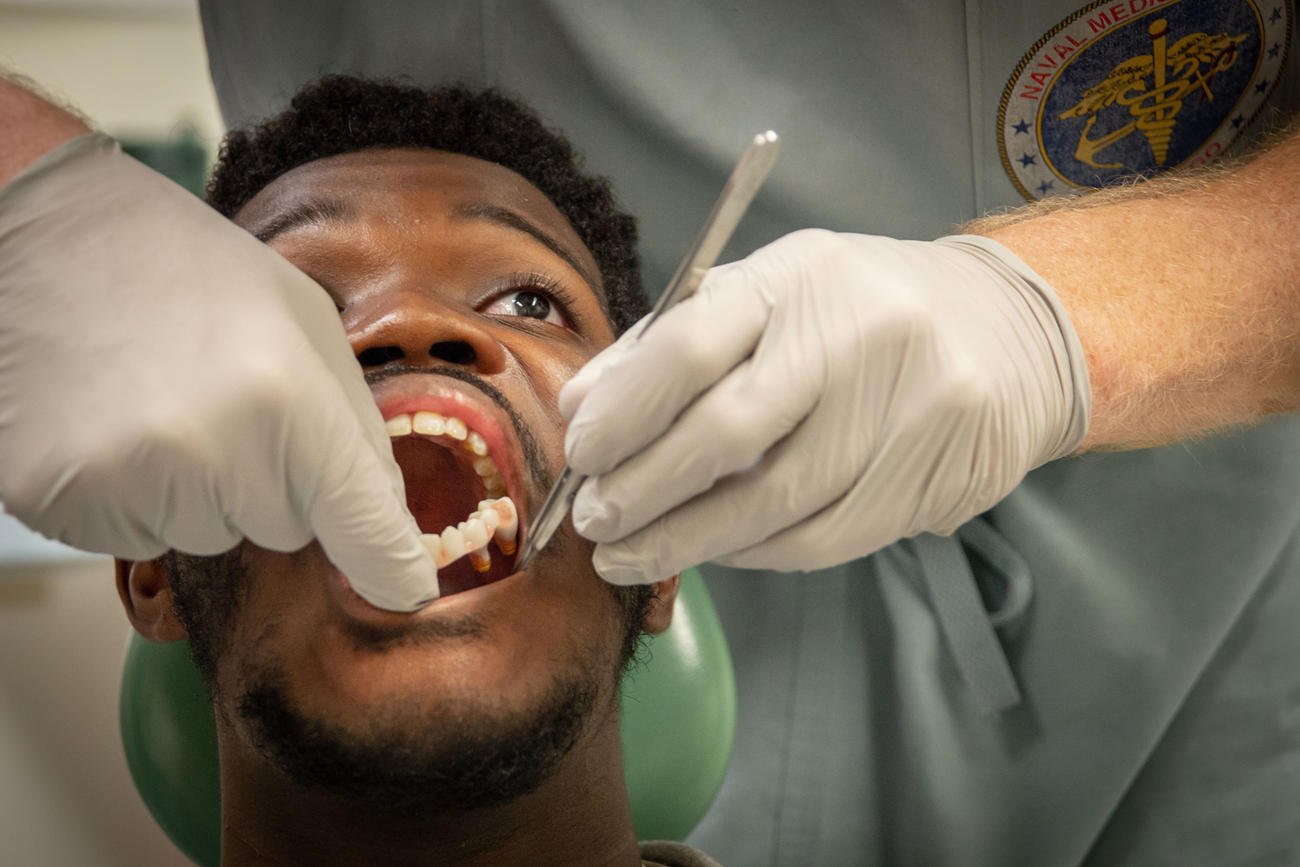 This article by David Roza originally appeared on Task & Purpose, a digital news and culture publication dedicated to military and veterans issues.

A lucky Marine made military medical history by becoming the first service member to receive a reconstructed jaw made out of one of his leg bones, complete with 3D-printed teeth, all in one surgery.

Lance Cpl. Jaden Murry, assigned to Combat Logistics Battalion 7 at Marine Corps Air Ground Combat Center, Twentynine Palms, Calif., was diagnosed with an aggressive but benign tumor in his lower jaw about a year ago. Usually, it would take multiple surgeries and years of recovery to come back from that, but new techniques and technology mean that Murry will return to duty after just one surgery and a few months of recovery.

“In terms of actual downtime away from his unit, we’re expecting Murry to be out for only eight to 10 weeks, compared to years with the previous reconstructive techniques,” said Lt. Commander Daniel Hammer, the surgeon who performed the procedure at Naval Medical Center San Diego on November 18, according to a recent press release. “That’s a tiny amount of time when compared to the magnitude of the procedure.”

The procedure is truly incredible, as it involved two surgeries at the same time. One surgical team worked on removing Murry’s tumor-stricken lower jaw while another cut out a section of the Marine’s fibula, the smaller of the two bones in the lower leg, and reshaped it to form a replacement lower jaw.

“Basically, I’m going to assemble a new lower jaw while the bone is still receiving its blood supply from the leg,” Hammer said in a November press release before the surgery. “We’ll then fully remove it, and transplant it into ready and waiting blood vessels in the head and neck, specifically into branches of the carotid artery and the jugular vein.”

The sutures they used to attach the new jaw to the existing blood vessels at the head and neck are about half the thickness of a human hair, Hammer explained.

Reshaping a leg bone into a jaw is crazy enough, but the surgery was also unique in that the surgeons crowned the new jaw with 3D-printed teeth designed right there at NMCSD. Even more extraordinary, the surgeons left enough of Murry’s fibula in his leg so that once he fully recovers he will have no restrictions on movement and exercise.

“He’s a young Marine,” Hammer said. “[The ability to] exercise and move around is huge for his readiness, rehabilitation and morale.”

The procedure is the first of its kind to be performed in California and the Department of Defense and is one of the first to be performed in the U.S. But why was it necessary to harvest the fibula and remove the lower jaw at the same time? Hammer explained that it was a safer and more efficient option: the more time a patient spends under anesthesia, the great the likelihood that complications can occur, he said. Plus, fewer surgeries mean that Murry has more time to recover and fewer traumas to recover from.

“Through collaboration with multiple surgeons and the knowledge obtained in my training, we can forever change a person’s life for the better in just one day,” Hammer said. “In terms of psychosocial damage and military readiness, there’s no question that the immediate jaw reconstruction procedure is better in every aspect versus the antiquated approach.”

It also helps to have a patient with a great attitude. Murry said he never felt too nervous, because he trusted the hands of his surgical team.

“Even though I hadn’t been in a hospital since I was three, I knew I was in good hands,” the Marine said. “I had to put all of my faith and hopes in the hands of strangers. I had to trust them all.”

He also relied on his mother and grandfather to ask insightful questions about the procedure and keep him calm throughout the process.

“My mother called [NMCSD surgeon Lt. Justine Odette] with questions that I wouldn’t have thought to ask, and my grandfather assured me that everything was going to be alright,” said Murry. “He calmed me down and put my mind at ease. [Odette] and Dr. Hammer have been very good at passing information to me and my family.”

The surgery took place on November 18, and Murry’s recovery has been smooth sailing since then. Within a week of the surgery, the team removed his tracheostomy tube, which is placed in a hole in the patient’s neck to allow for breathing. Soon afterward, the Marine passed a swallow test, and he was back to speaking and eating without a feeding tube.

“To see him swallowing, speaking, walking and not using a tracheostomy tube one week post-surgery was a huge victory, both for [Murry] and for us,” Hammer said. “Even with an entirely new lower jaw, we were so confident in his ability to swallow, we removed his feeding tube immediately after [Murry] passed the swallow study.”

Of course, just because Murry is healing fast does not mean it has been easy.

“The first two weeks were difficult, and I was in a lot of pain,” he said. “I’ve been on a soft food diet of chicken noodle soup, baked beans and ramen noodles. I really look forward to getting back into a healthy mindset and working out, running and body building.

“Everything is going to heal, and healing is a process that won’t last forever,” he added.

Hammer credited his military medical training and the other health professionals on the NMCSD team for the smooth execution of the procedure. Other physicians include Odette, one of NMCSD’s Dental Department’s Oral and Maxillofacial Surgery (OMFS) chief residents; Cmdr. Yu Zhang, a maxillofacial prosthodontist assigned to NMCSD; Capt. Craig Salt, Cmdrs. Eamon O’Reilly and Yan Ortiz from Plastic Surgery; and Cmdr. Patrick Morrell, who led one of the surgical teams charged with the removal of the patient’s lower jaw. Murry also got help from NMCSD’s Intensive Care Unit, Physical and Occupational Therapy, Speech-Language Pathology, Respiratory Therapy, Clinical Nutrition, Social Work, and Nursing teams.

The Marine will still have regular check-ups to make sure the new teeth are in good condition and the new bone is completely integrated into the jaw. But if everything goes expected, he’ll be completely healed, restriction-free, and able to solid food within six months.

When that happens, Murry said, pizza is most definitely on the menu.

• The National Guard’s response to the Capitol Hill riots: Everything you need to know

© Copyright 2021 Task & Purpose. All rights reserved. This material may not be published, broadcast, rewritten or redistributed.

Diary Shows How Quest for Love Landed Navy Vet in Iran Jail
Ask Stew: How to Prepare for the Run That Comes After the PT Test