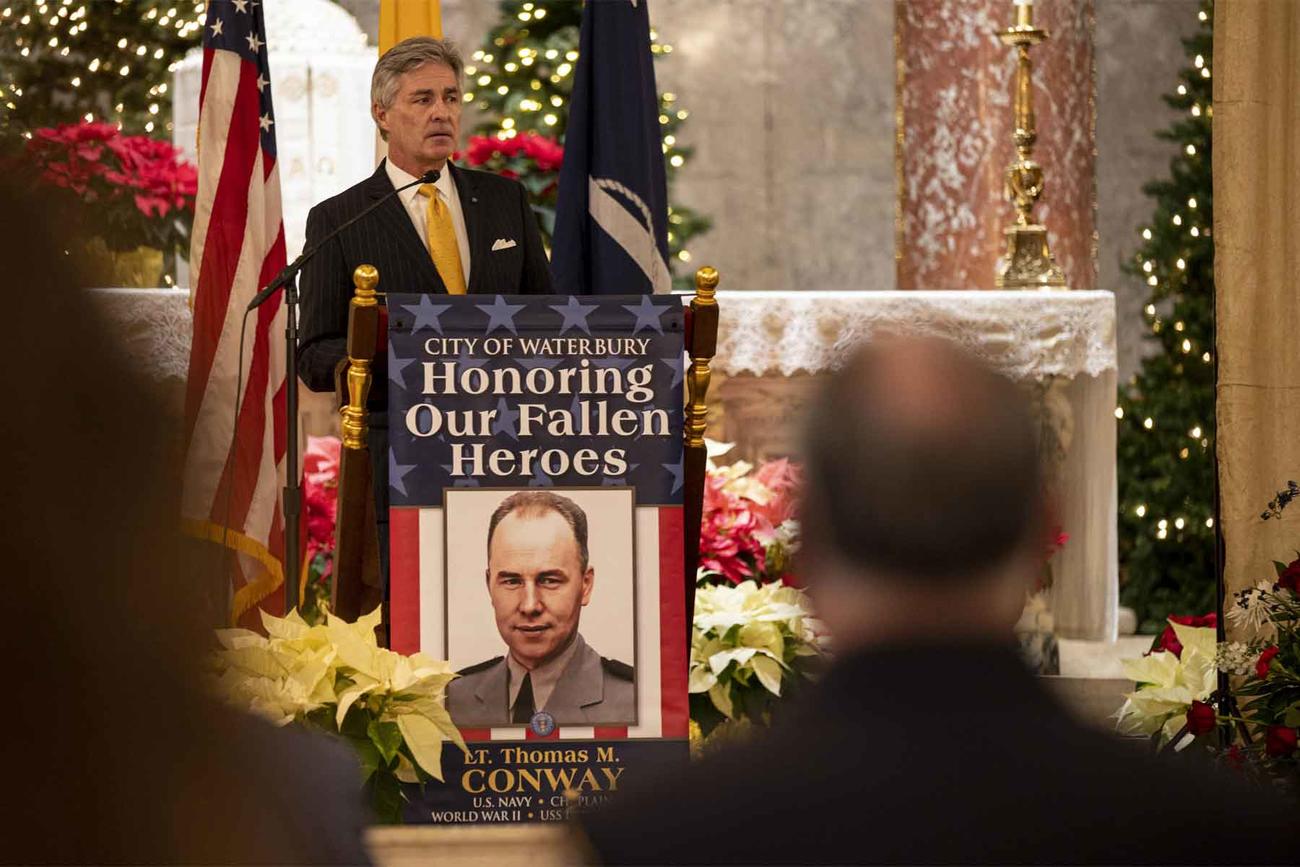 A Navy chaplain who comforted sailors whose ship was torpedoed in 1945, leaving them stranded in shark-infested waters, has been posthumously awarded his service’s second-highest award for heroism.

Lt. Thomas M. Conway, a Catholic priest who died on Aug. 2, 1945, three days after a Japanese sub took out the heavy-cruiser Indianapolis, was recognized for his bravery during a Navy Cross ceremony Jan. 8 in his Connecticut hometown. Navy Secretary Kenneth Braithwaite apologized that it took more than 75 years since World War II ended to honor the fallen chaplain.

“My mother taught me that it’s never too late to say you’re sorry,” Braithwaite said. “Today, the Navy is sorry for not recognizing Chaplain Conway’s heroism, dedication and courage sooner.”

Read Next: Navy’s Littoral Combat Ships Will Be on the Front Lines in the Pacific, SWO Boss Says

The Indianapolis was heading to the Philippine island of Leyte from Guam when it sank in the early hours of July 30, 1945. More than 800 crew members were forced into the ocean, some of whom were badly injured.

They were left in the water for three days, where they faced dehydration and shark attacks. They were spotted by a Navy aircraft on Aug. 2. Only 316 survived.

Conway is credited with repeatedly swimming through the shark-infested waters to console clusters of sailors, according to the Navy. He encouraged them, prayed for them, and administered sacraments.

“After three days of tireless exertion to aid his shipmates, Conway finally succumbed to exhaustion and died,” a Navy news release about his posthumous award states. “His efforts were credited as a major reason 67 of his shipmates in his group were ultimately rescued.”

The chaplain stood by his men when they needed spiritual guidance most, Braithwaite said, as he presented the award to retired Navy Capt. John Bevins, a former pastor, during the private ceremony.

Conway, who grew up in Waterbury, Connecticut, before attending Niagara University in New York, joined the Navy in September 1942. He served at several East Coast naval stations before transferring to the Pacific Fleet, where he was assigned to the repair ship Medusa before joining the Indianapolis in 1944.

Braithwaite called Conway a beacon of putting service above self for all serving in the Navy and Marine Corps.

“His actions will inspire others who at dark and challenging moments in their lives must follow their heart to do their duty. For me personally, this has never been more relevant than during the very events of this week,” Braithwaite said last week, referencing the violent Jan. 6 siege of the U.S. Capitol.

“When you are entrusted to serve the men and women of the Navy and Marine Corps, you must always choose as Father Conway did, to do what you must do — your duty — rather than what you could do for yourself.”