‘You Were in the Situation Room, We Were High-Fiving:’ Airmen Brief DoD Chief on Sporty Hostage Rescue Support Mission 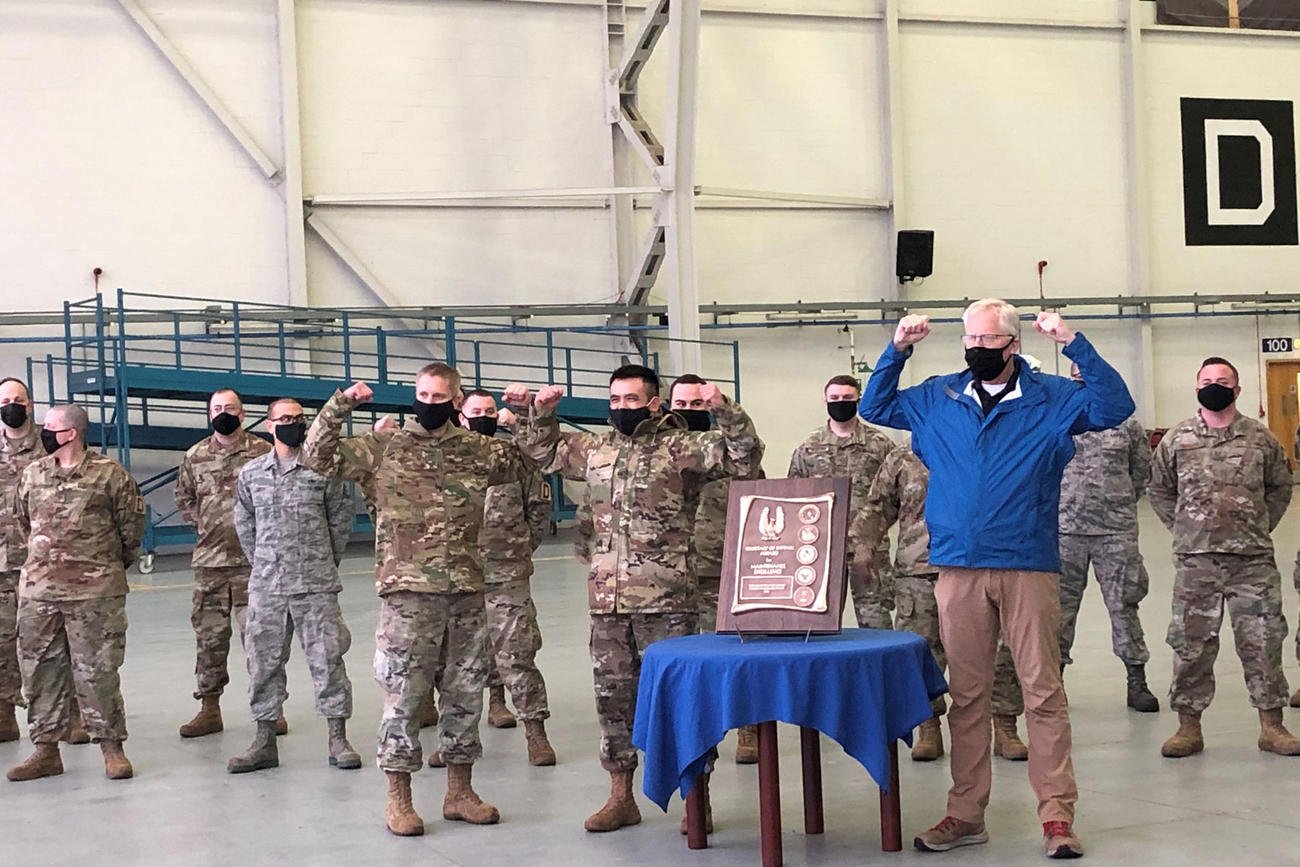 RAF Mildenhall, U.K. — Acting Defense Secretary Christopher C. Miller expressed awe Monday as he was given new details on an Air Force unit’s support of the safe rescue of an American hostage in Nigeria at the end of October.

Miller, who visited the base as part of a pre-Christmas trip, was briefed by members of the 100th Air Refueling Wing here on how they’d hustled tankers into the air on short notice, overcoming technical setbacks to accomplish the no-fail aerial refueling mission that allowed a Navy SEAL team to achieve its objective.

On Oct. 31, members of SEAL Team Six inserted into Nigeria via CV-22 Ospreys and MC-130J Commando II special operations aircraft to rescue Philip Walton, who had been kidnapped from his farm in bordering Niger days before. The mission was an unqualified success: Walton was recovered safely, and the SEALs killed all but one of his seven captors while sustaining no casualties themselves.

Read Next: In Afghanistan, Secretary of Defense Helps Set the Stage for the US Withdrawal

The 100th, sometimes called “the only gas station in town” because its capabilities are unique to the region, supplied five of its 15 KC-135 Stratotankers to the mission, supporting the special operations aircraft from 352nd Special Operations Wing, co-located at Mildenhall. The aircraft forward-positioned in Rota, Spain, before departing for Nigeria, more than 2,000 miles away.

“With the combat radius of the air refueling teaming up with our 352nd Special Operations Wing partners … we can reach out and touch anybody in Europe and Africa. And I’m proud of that, sir,” Lt. Col. Ryan Ferdinandsen, chief of safety for the 100th, told Miller as they stood in the shadow of one of the massive stratotankers.

While the high-profile mission earned praise from President Donald Trump and other top officials, and even the role of the aerial refuel team has been highlighted, Ferdinandsen offered new details about what the squadron had to overcome to get the mission done.

“I would like to laud, sir, one of my aircrew, Capt. Will Carroll,” he said, indicating a young pilot at his side. “He was on one of the sorties that late night taking off out of there. The weather wasn’t great. They had basically an emergency … some electrical failure. At high speed, they aborted. … Meanwhile, here’s an AC-130 gunship en route over the Atlantic. So it has to happen again, talking about priority of mission. It cannot fail.”

The squadron’s maintenance team stepped in, he said, resolving the technical issue and securing a waiver needed to take off again with minimal equipment. They made the refueling window. Days before the mission, the 100th Maintenance Group was awarded the 2020 Secretary of Defense Maintenance Effectiveness Award, which Miller presented during the engagement.

Miller, who has had barely a month in his role, having served as the head of the National Counterterrorism Center before he was tapped Nov. 9 to replace fired Defense Secretary Mark Esper, was effusive, describing how he’d observed the mission from within his prior role, unaware of all the challenges.

“I did not know you had to do a quick change,” Miller said. “We didn’t know, from the White House Situation Room. You’re like, it went off like a charm, you know, easy day. But that’s the fog and friction I’m talking about that we don’t oftentimes appreciate.”

Carroll, while reserved about his role, warmed to the acting SecDef’s enthusiasm. “It was awesome,” he told Miller. “It was a little unnerving at first … that’s what we train for.”

Col. Troy Pananon, commander of the 100th, who spoke with Military.com and other reporters further about the mission, said the long haul involved “multiple, multiple refuelings” with the KC-135s providing fuel to the MC-130s, which could then refuel the CV-22s.

“It’s trying to match all that up midair, going about 300 miles an hour, having aircraft within 10 to 12 feet of each other at night. And you know, in strenuous conditions, yeah, it’s a challenge,” he said. “Like the secretary said, we made it look so easy, but it’s not that easy.”

Ferdinandsen, who noted that the 100th makes up about 4% of the Air Force’s aerial refueling capacity, yet accomplishes 23% of the service’s Priority One and Two “no-fail” missions, underscored the pride the unit took in getting the job done.

“Just so you’re aware, in the Situation Room, you guys are watching,” he said. “And we’re high-fiving as we’re launching jets here, because we’re making it happen and supporting the team, which is an awesome opportunity.”

The rescue mission came just a month after the 100th participated in Operation Wolff Pack, a proof-of-concept training effort in which the unit launched all but one of its planes. Part of the Air Force’s Agile Combat Employment effort, the exercise showed how the wing could mobilize rapidly and operate forward from a broader range of locations.

There’s nothing uncommon about a unit taking a bow for a successful mission when a senior leader comes to visit. But the event and conversation did provide insights into the thinking of Miller, a former Army special operations officer who has a narrow window to leave his mark: He likely will lead the Defense Department for another month before President-elect Joe Biden is inaugurated in late January.

“There’s not another military in the world that could have pulled that off,” Miller said. “The problem, and [Joint Chiefs Chairman Gen. Mark Milley] and I talk about this all the time, and I talk to the [Joint Special Operations Command] commander as well, is you guys make it look so freakin’ easy, that the American public just automatically assumes like, ‘Oh, yeah, you know, you push the U.S. military button and everything’s going to go fine. … That’s why it’s so important to come out here and listen to y’all.”