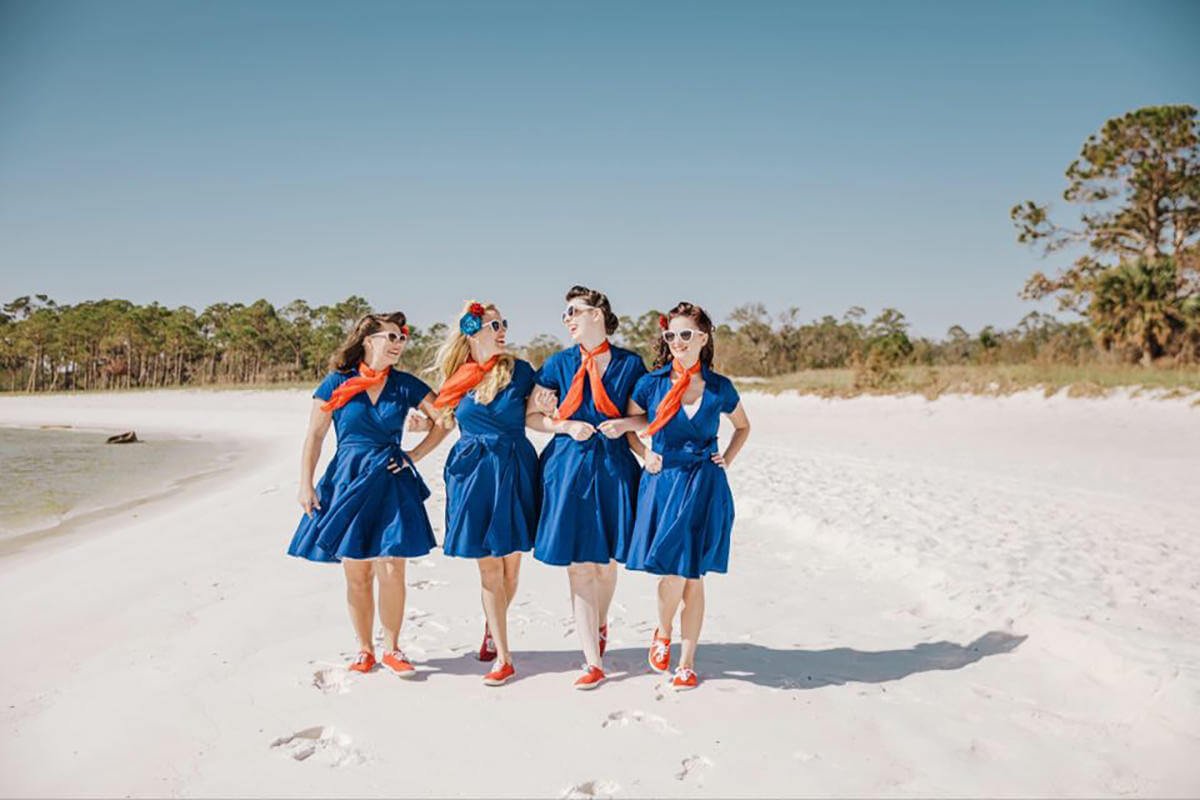 One look at their pin curls, painted red lips and A-line dresses in patriotic hues, and you’re instantly transported back to the 1940s.

But then you hear the Blue Anchor Belles sing. Just a few notes, and you can’t help but tap your toes.

The “Belles,” as they’re known, is a 1940s-style female singing trio in the Pensacola, Florida area. The group is made up of Naval aviator spouses.

The group takes inspiration from The Andrews Sisters, the best-selling harmony group of the early 20th century, famous for their song “Boogie Woogie Bugle Boy.”

“We’re bringing boogie-woogie back,” Goldie Lahr, who started the singing trio in 2016 while stationed in Oklahoma City, said.

Lauren Martin, a member of the group, notes that the song is a crowd favorite.

“I missed singing, so I decided to start [the group],” Lahr said.

Lahr began arranging unique, three-part harmonies for beloved songs from the World War II era. She held auditions to find additional singers for the group, inviting fellow military spouses to be a part of her vision. Before she knew it, the Blue Anchor Belles was born.

Like for many military families, new orders eventually came. So rather than leave it behind, the Blue Anchor Belles PCS’d to Pensacola in 2018, a move that’s been a great fit.

“Coming to Pensacola has been like coming home for us. Not only is the rich history of Naval aviation here close to our hearts, but the military, veteran and civilian communities have welcomed us with open arms. Not to mention, people in Pensacola love live music,” Lahr said.

The Belles perform at military functions, community events and minor league sporting events. Still, their passion is singing for aging veterans and their families at assisted living centers and memory care facilities.

“This is music from their generation, and you can see how much joy it brings them. Plus, it brings us joy to keep this vintage music relevant,” Lahr added.

Since its beginning, nearly a dozen talented female singers have been a part of the Blue Anchor Belles.

“Once a Belle, always a Belle,” Lahr said.

But as most military stories go, their spouses eventually move on to new assignments in new duty stations. Each member takes a piece of the Belles along with them when they move.

For that reason, auditions are held semi-regularly.

“The member that’s about to leave teaches the new member her parts.”

Lahr admits there’s a downside to having members move so frequently.

“But there’s an upside too,” she added. “We have this community of Belles all over the country. We’re in Washington state, San Diego, Virginia, and that community is constantly growing!”

Martin joined the group in 2019 when she moved to the Pensacola area with her husband for primary flight training at NAS Whiting Field.

“I saw a call for auditions and decided to give it a go. I did theater and music growing up and had really missed it,” Martin said.

She says she appreciated the opportunity to pursue her passion.

“Moving down here, I had a hard time finding a job. There weren’t many opportunities in the field I work in, and when employers realize you’re a military spouse and are going to move sooner rather than later, it just adds to the difficulty. It was disheartening. Then I found the Blue Anchor Belles, and it was so nice to have something for me. I feel so lucky to be able to do what I love, which is singing and performing, and so lucky to be a part of this,” Martin said.

The Belles love being a part of a community of military spouse performers, which is exactly what Lahr was hoping to build in the first place.

“It’s a special thing in that it gives military spouses the opportunity to use their talents and a family to belong to,” Lahr said.

The new year will bring another PCS for Lahr, and she plans to bring the group with her, opening up the opportunity for new military spouses to join the Belles’ ranks.

“We brought the boogie-woogie to the gulf coast, and soon we’ll look to bring it to the west coast. And who knows where we’ll take the Belles after that,” said Lahr.

To learn about auditions or book the Blue Anchor Belles for an event, visit: www.blueanchorbelles.com.

A Year Later, NCIS Still Investigating the Case of the Missing Marine Corps Rifles
Biden Hits Back at Criticism Over Choosing Retired General for SecDef