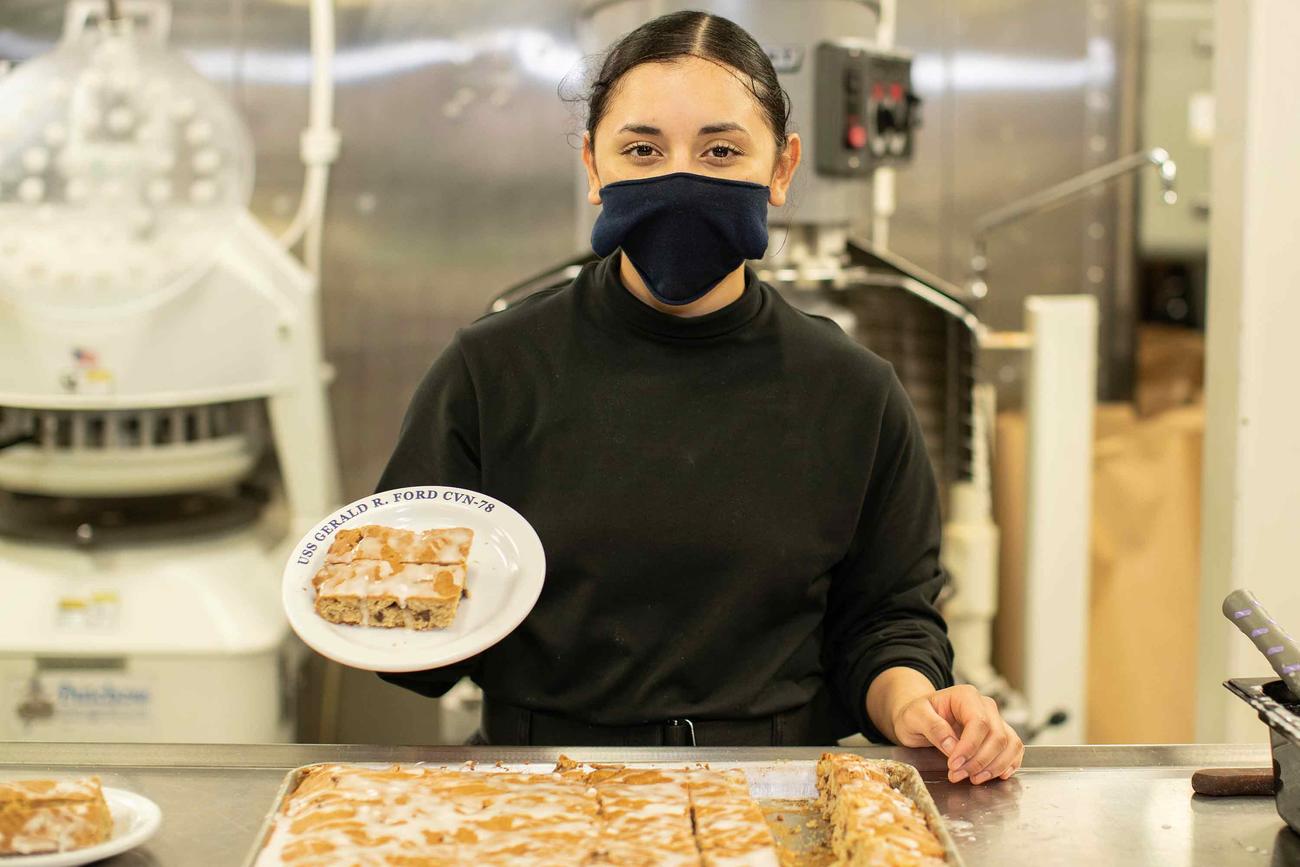 OFF THE COAST OF NORFOLK, Virginia — In October, an enlisted sailor aboard the carrier Nimitz published a Facebook post that quickly went viral showing an assortment of truly disgusting-looking meals from the mess deck, from raw and bloody roast beef to bread edged in blue mold and grey eggs with fossilized yolks.

While a Navy official came to the Nimitz’s defense, pointing out it had been recognized for the best carrier food service in the fleet this year, an array of measures are being taken on the next class of carrier to ensure sailors’ mess is better than it’s ever been.

On Tuesday aboard the carrier Gerald R. Ford, Military.com toured a galley, or kitchen, and refrigerated storage unit replete with design tweaks to enable food to stay fresh longer and enjoy higher levels of quality control in preparation and service.

The Nimitz, the first of its class, was commissioned in 1975, and the Ford in 2017. While the ships have the same footprint, space all over the Ford has been reimagined to make carrier life and work better and more efficient.

Regarding food, one of the most significant changes on the Ford is the ship’s two galleys, compared with the Nimitz’s five. According to Navy officials, these include a centralized galley to the aft of the aircraft and a forward galley that will be manned only when the carrier’s air wing is aboard. While this means the ship’s food service crew will be more centralized and the mess they dish up more consistent, it also means that officers, chiefs and enlisted sailors will be eating the exact same food — even though they still eat on different mess decks.

If seamen are getting fossilized eggs, officers will get them too.

In one of the galleys, a chef, Culinary Specialist Trevorn McKnight, showed off another modernization: self-cleaning touch-screen steam and heat convection ovens with a myriad of settings for cooking every kind of meat in a variety of styles. More automation means less guesswork and more consistency when serving up four meals a day to a crew of up to 4,000.

“Our reviews have been pretty solid, I think, from the crew,” he said.

Below the galley, a fluorescent-lit refrigeration unit held pallet upon pallet of pineapples, tomatoes and melons. In the corner, bags of onions, yellow and purple, were neatly piled halfway to the ceiling. Koch explained that these storage rooms were designed with a number of modular refrigeration units designed to maintain everything in storage at a steady temperature. In the Nimitz’s legacy system, he said, with storage set up around a centralized refrigeration unit, a change to the temperature of one section would cause the temperature of everything in the unit to climb, resulting in poorer storage conditions and risking spoilage.

“With ours, when individual units go to defrost, the temperature stays the same everywhere else,” he said.

And from the ceiling above refrigerated produce hung ethylene filters, designed to trap the gases that cause ripening and allow fruits and vegetables to remain fresh for longer.

“We had fresh strawberries … usually by the 14-day mark, you’re struggling,” he said. “We were eating green salad on Day 28.”