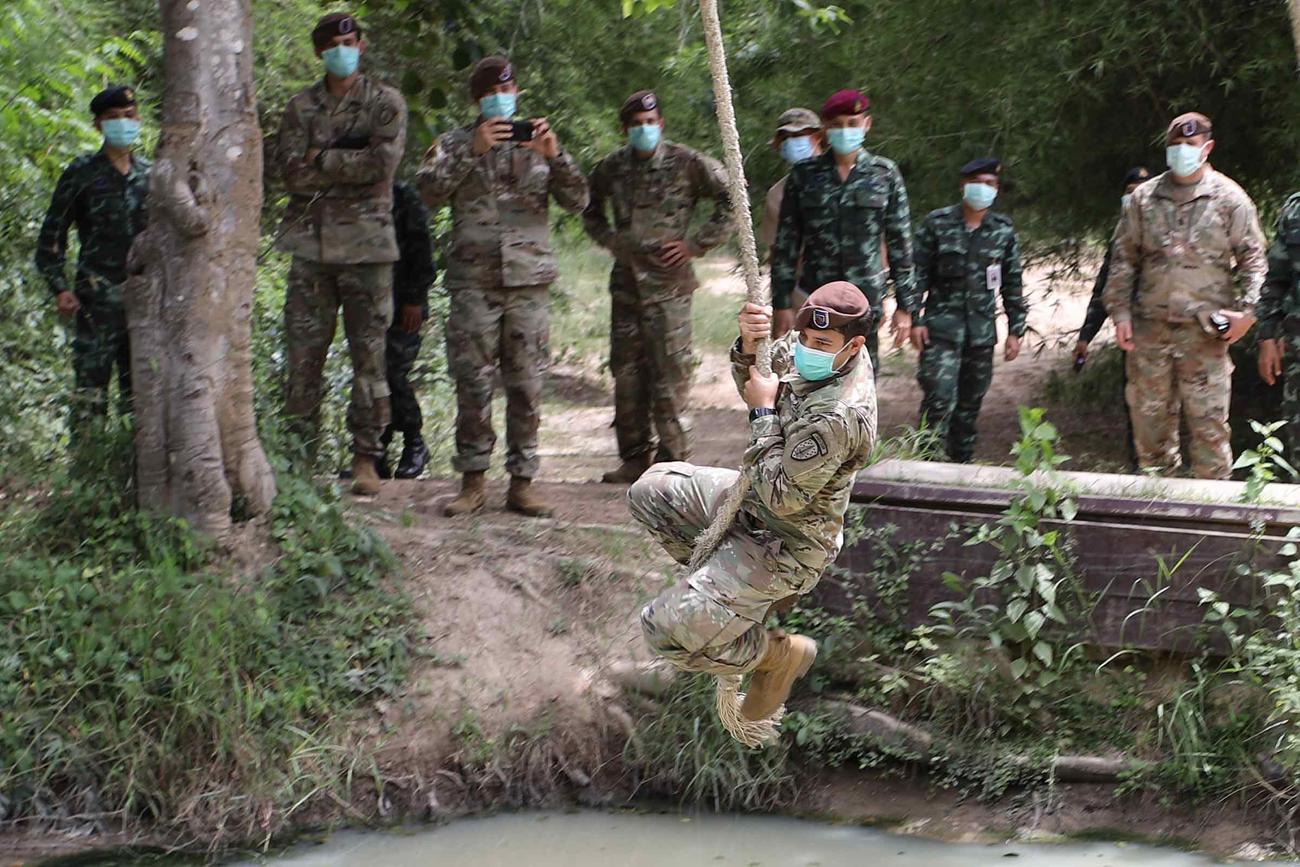 As the 5th Security Forces Assistance Brigade (SFAB) prepares to begin six-month rotations in the Pacific next year, its teams have already learned that the Royal Thai Army and other units in the region will be extremely capable on any battlefield.

During a July exercise with the 25th Infantry Division in Hawaii, the Thai unit showed they were a “very capable fighting force” during the last attack against a complex trench system.

“The Thais were fully integrated into the planning of the mission with the U.S. battalion they were partnered with, and they were tasked to execute a bold flanking maneuver through some very difficult terrain,” Brown told defense reporters at a recent telephone roundtable discussion. “They completed that, synchronized with the rest of the U.S. battalion — with us providing some artillery support from the U.S. side, and then attacked straight at dawn and moved right into and established their own support-by-fire position.

“Really, what that highlighted to me was the benefit of us providing U.S. support in that situation and not trying to take over that fight,” he added. “They executed using their own tactics, their own planning techniques.”

The Army announced in October that the service will assign its active SFABS to specific geographic regions around the world, where they will operate in much smaller teams than in the past. The Army created six SFABS — five active and one National Guard — to serve as special advisory units to train and advise foreign partner armies.

Until now, the SFABs have deployed as an entire brigade for nine months to work with less-advanced military forces in Afghanistan. Going forward, smaller elements of each of the five active SFABS will conduct six-month deployment rotations to their assigned regions and have 12 months at home station, Brig. Gen. Scott Jackson, commander of Security Force Assistance Command, told reporters. He added that the shorter rotations will allow the SFABs to maintain a “consistent and enduring presence” in their regions.

“With presence comes trust and with trust comes the ability to react quickly to new crises and situations in the future,” Jackson said.

The National Guard SFAB will serve as a reserve force to reinforce the five active SFABs where needed.

“Basically, a third of my brigade will go forward every six months,” said Taylor, who is currently in the middle of a rotation at the Joint Readiness Training Center at Fort Polk, Louisiana.

Taylor’s SFAB is advising a force from a fictitious country that’s made up of 2,300 soldiers from the 2nd Stryker Brigade Combat Team at Joint Base Lewis-McChord, Washington.

“It’s a totally different experience with me having to work with a really capable and effective partner who really wants to win,” he said.

The JRTC will soon shift from a counter-insurgency operation to full-blown conventional warfare. SFAB leaders said that they are not asking the 2nd SBCT soldiers to fight any differently or downplay their capabilities, so the 5th SFAB soldiers can practice advising a competent military force, like the ones they will work with in the Pacific.

“It gets to the question that we often get that the advising capability is only for nations that are struggling to build a baseline level military — that has not been our experience level at all,” Taylor said. “We found that we have an awful lot to offer to very capable militaries on the interoperability and integration of a lot of these warfighting functions, like artillery and engineers and logistics that have been the core competencies of the U.S. military.

“I think when we work with a number of very capable militaries in the Pacific, we are going to find that that’s a great strength,” he said.

After the July exercise in Hawaii, Brown’s team traveled to Thailand in August to train with the same Royal Thai Army unit and then advised them again during a JRTC rotation in October, alongside soldiers from the 25th Infantry Division.

“We were able to show them kind of what our goal was,” Brown said. “The ah-ha moment for me was how we can provide a critical linkage between the Royal Thai Army and, in this case, the 2nd Brigade, 25th Infantry Division, and form that interoperability so we could be a collective team and not a U.S. unit and a Thai unit operating separately. We formed one team.”

Editor’s note: This story has been updated to correct the unit playing the fictitious force at JRTC.

Related: The Army Is Reorganizing Its SFAB Units to Deploy Globally

Ask Stew: The Choice of Stroke for the Navy Swim Test
Here’s Why Sailors on the Carrier Ford Will Eat Better Than Anyone Else in the Fleet