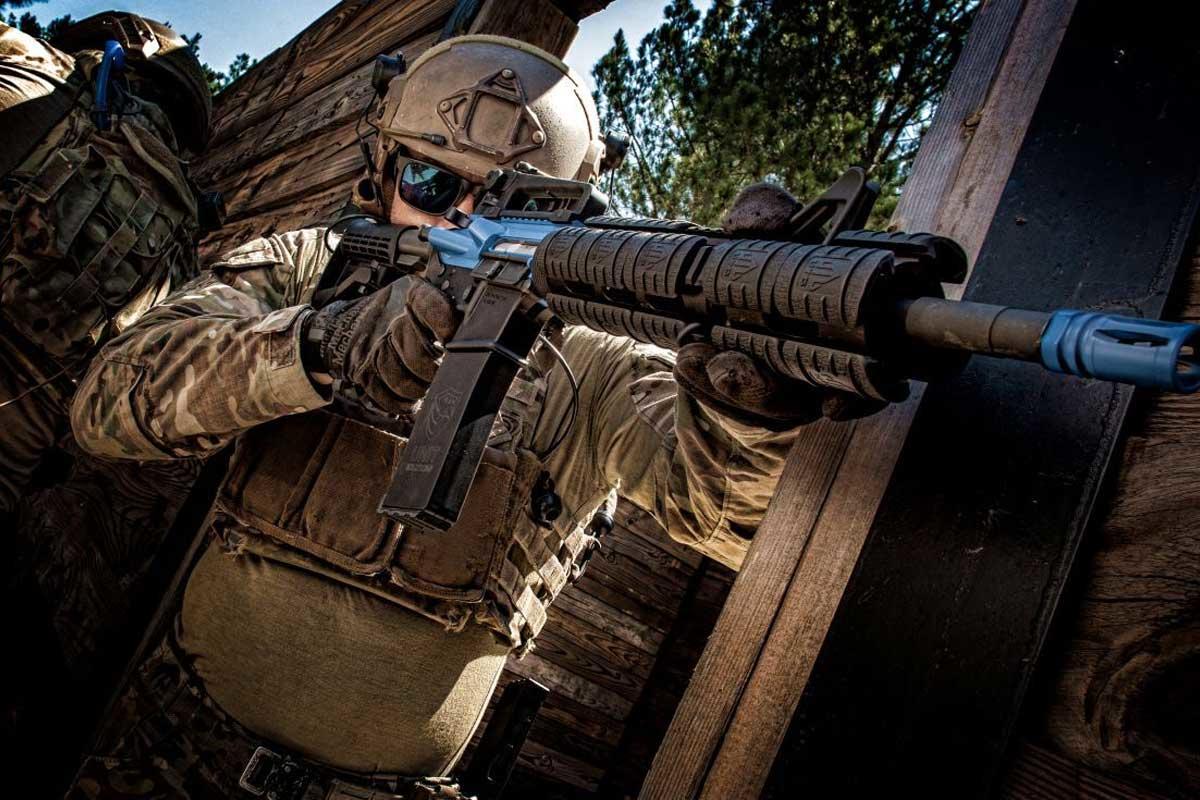 A California-based company has introduced a nonlethal M4 carbine-style training tool that is catching the interest of elite door-kickers in Army Special Operations Command.

“You are no longer [required] to go to the range for training,” he said. “You can train off-range.”

Read Next: ‘An Unprecedented Man:’ Medal of Honor Recipient Ron Shurer Laid to Rest at Arlington

The Unit4 system is designed for close-range, force-on-force tactical training. It can fire on semiautomatic and fully-automatic, launching paintball-style and non-marking projectiles at 300 to 350 feet per second, with a maximum range of about 35 meters, Fitterer said.

“All the components look very similar to a user’s M4; there is a slight modification in the lower [receiver] and the bolt doesn’t have a firing pin and it’s a smoothbore barrel,” Fitterer said.

“We are certified by the FBI to not break skin or quarter-inch glass outside of five feet.”

Military.com reached out to Army Special Operations Command to confirm the Ranger Regiment’s purchase but did not receive an immediate response.

“We are basically trying to get it in the door of Special Operations Command,” Fitterer said, adding that the company will work with any service that is interested.

“Right now, we are so new that we wanted to get into special operations — with the idea that if Green Berets and Rangers have it, other units are going to want to get it.”

The Unit4 project actually started in 2011 and is now in its third-generation model, Fitterer said.

“It has taken a long time, but if you don’t have the right product to introduce, then you are not going to get a second chance,” he said.

Unit Solutions teamed up with weapons manufacturer Lewis Machine & Tool Co. to make the Unit4 and is currently selling it for $500 a system, Fitterer said.

“It costs $1,000 for them to make it; we sell it for $500 right now, because we feel that people will like it and use it enough they will continually buy ammo for it,” he said.

Beginning in January, the unit price is set to go up to $750, Fitterer said, adding that ammunition is about 30 cents a round.

Currently, there is no set number of systems being marketed together as units assess how to use the system to complement their training, Fitterer said.

“We have had some individual [operational detachment alpha teams] that want to buy 12, one for each man on their ODA,” he said.

“Some people think it is kind of a niche product and other people, you can tell that the gears start working in their brain, and they think of all the different training avenues they can take with this system.”

How the Tactical Population Should Tackle Testing, Keeping Up With Health and Job Performance
SecNav Says China Poses ‘Threat Beyond Any Comparison’ to American Way of Life