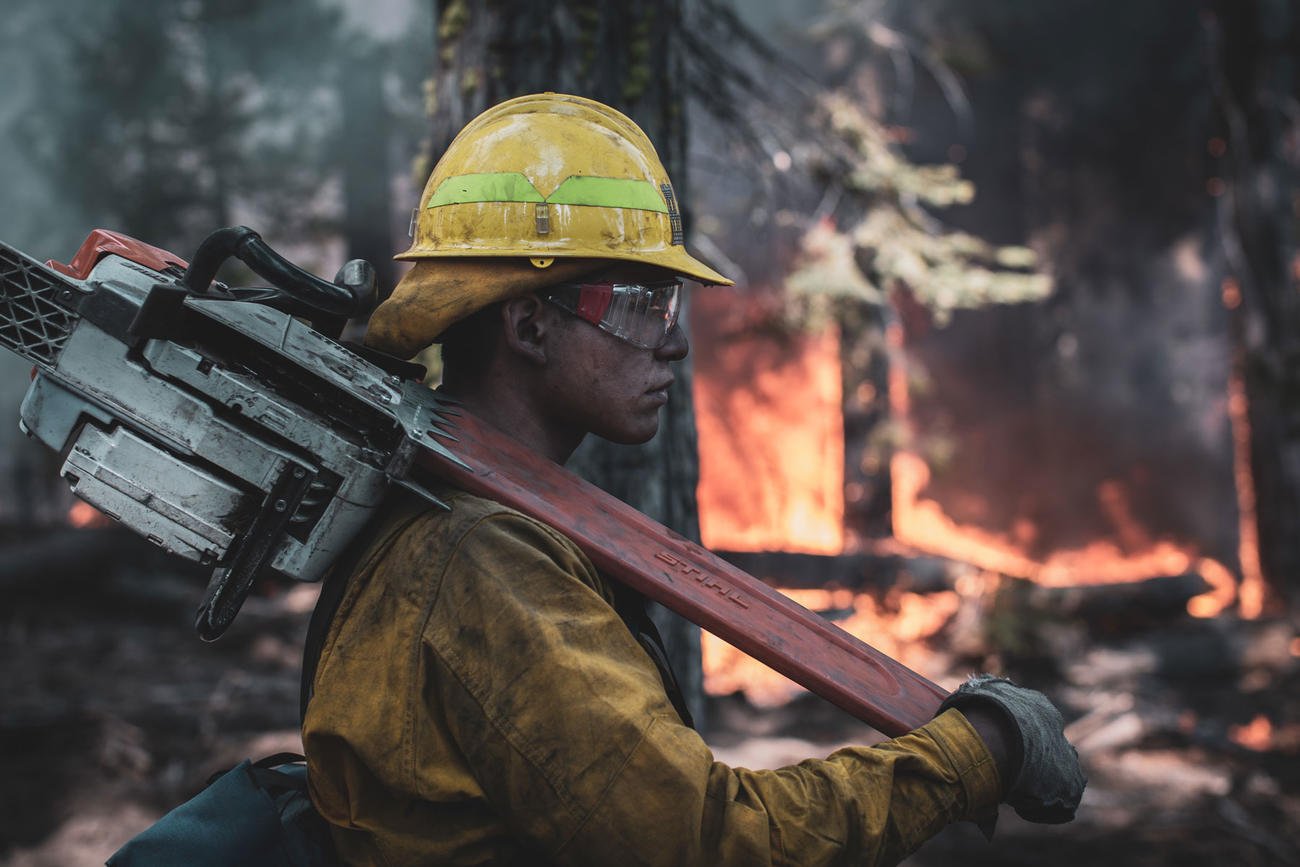 These Marines and sailors didn’t join up to fight wildland fires, but that’s exactly what this unit from Camp Pendleton has been doing for the past 30 days.

“It has been a blessing to be part of such a big event in history and to be able to help the people of these communities,” said Lance Cpl. Etienne Herholdt of the 7th Engineer Support Battalion, which was sent to Northern California, first to help battle the Creek Fire and then the August Complex fire.

“They are some of the most caring and thankful people I’ve met,” Herholdt, 22, said. “It makes all the long hours worth it knowing you can make a difference in somebody’s life.”

On Tuesday, Oct. 20, he and 249 Marines and sailors returned to Camp Pendleton aboard seven buses. Families, who because of the coronavirus were kept at a distance in a fenced-off reception area, held signs welcoming them back.

This is only the second time in 20 years Marines from Camp Pendleton have been tapped to fight wildland fires. But with millions of acres burning throughout California, the Department of Defense put out the call and the unit boarded buses on Sept. 19 and headed out. They joined 200 Army soldiers from Joint Base Lewis-McChord, Wash., who deployed in late August to help combat the growing fires.

In 2000, a Camp Pendleton unit was activated to help near Salmon, Idaho. Since 1988, the DOD has provided military support to fires 39 times.

The Creek Fire northeast of Fresno is the single largest fire in the state’s history and the August Complex fire, a series of fires burning around the Mendocino National Forest, has charred a record 1.03 million acres and spread across nine counties.

To prepare for their unusual mission, the Marines — who in their military jobs build, repair and maintain buildings, roads, and power supplies under fire and in dangerous combat environments — had a two-day crash course at Camp Pendleton on fighting fires. They were briefed and trained by a group of Bureau of Land Management wildland firefighters.

Some days, the Marines and sailors spent up to 12 hours working on the fire lines. When they weren’t working, they lived in one-person tents in a makeshift village. They used shower trailers and ate food brought in by caterers.

On Oct. 8, the group traveled five hours from the Creek Fire to the August Complex Fire, setting up camp at the R Wild Horse Ranch and quickly getting back into the action.

“The junior Marines out here, they’re motivated to do work,” said Shane Olpin, a military liaison for the U.S. Department of Agriculture Forestry Service. “It’s a call-to-service in a different level.”

He guessed for some, the experience would probably be a highlight of their service. And having them available allowed experienced fire crews to be moved to more complex areas of the blaze and offered relief for other crews, Olpin said.

While as Marines they were up for the challenge, the short-term firefighters said they had an appreciation for the dedication to mission their civilian counterparts shared.

“This has opened my eyes to how challenging the firefighter job is when it comes to the physical demands expected on a daily basis, day after day, for long hours at a time,” said Staff Sgt. Alexander Krieger, a combat engineer, who at 28 has served in the Marine Corps for a decade.

And in the end, the Marines and sailors bonded more closely through the experience, Gunnery Sgt. Warren Peace, a spokesman for the unit, said. “The consensus was that it was great helping other Americans.”