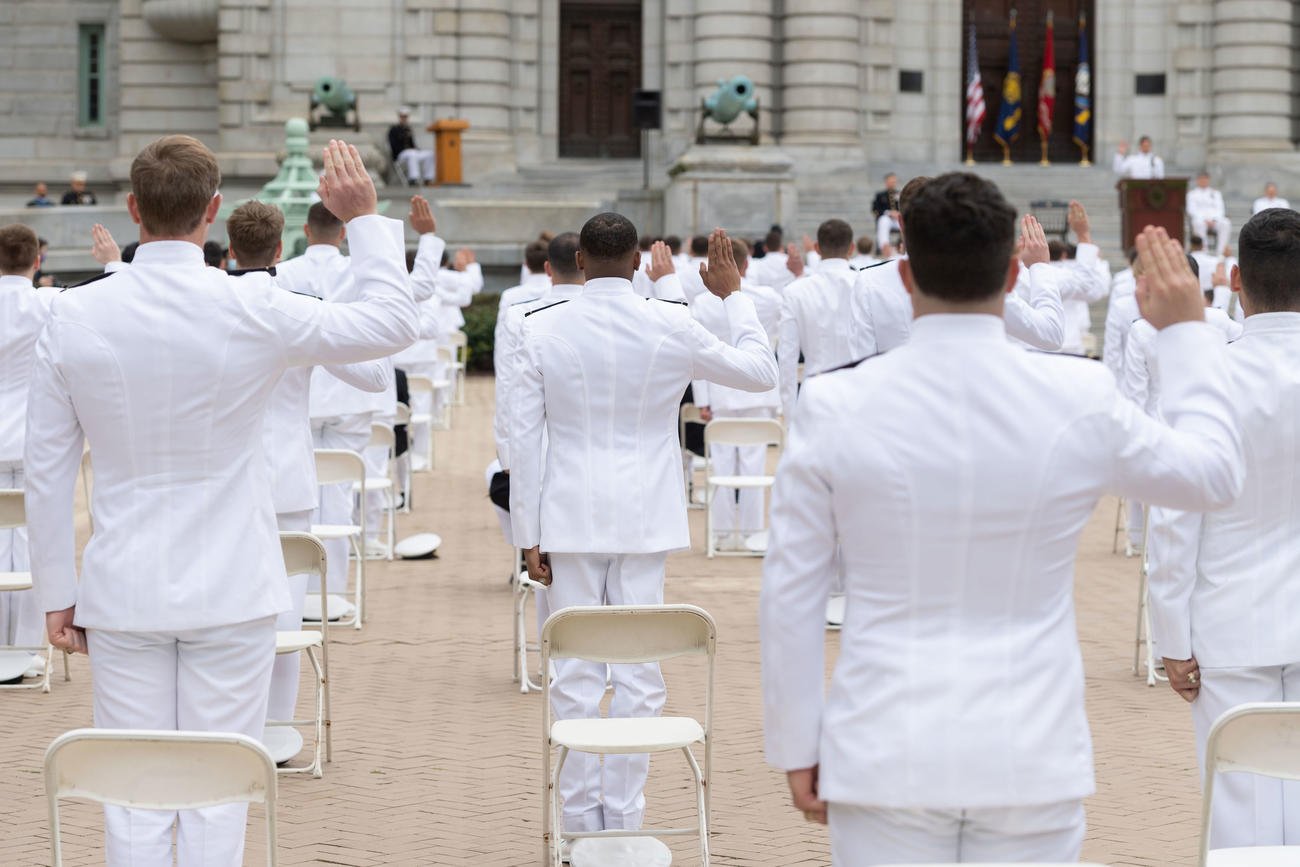 The attorney representing a California midshipman facing expulsion over racist tweets has a long history with the Naval Academy, including previously defending a midshipman separated over racist language.

Midshipman 1st Class Chase Standage’s lawsuit against the Naval Academy superintendent and secretary of the Navy may only list two defendants, but in trying to prove Standage’s First and Fifth Amendment rights were violated, attorney Jeffrey McFadden has brought in several members of the Naval Academy community. That includes the commandant’s daughter, as evidence of a “culture war” that sees the academy adopting tenets of Black Lives Matter and anti-racism.

Superintendent Vice Adm. Sean Buck and Commandant of the Midshipmen Thomas R. Buchanan have made several public statements encouraging midshipmen to reflect on their actions and educate themselves about systemic racism, including at the academy, since the police killing of George Floyd over the summer.

McFadden, who is the lead attorney on the case, is a Naval Academy alumnus, a 1979 graduate. Over the years, he has stayed connected to his alma mater, often criticizing what he sees as the changing culture.

Standage has asked for an emergency hearing to keep the Naval Academy superintendent and secretary of the Navy from expelling him. McFadden’s request for a preliminary injunction was filed the same day he filed a lawsuit in U.S. District Court, claiming the Navy’s looming action would violate his client’s rights to free speech and a fair hearing.

In the lawsuit filed Wednesday by McFadden and Annapolis attorney Crighton Chase, Standage asked the judge to find that the Naval Academy leadership discriminated against and that his tweets did not violate academy regulations or the Uniform Code of Military Justice.

While Chase and his firm were listed on the legal documents, McFadden is the primary attorney, McFadden said. Currently, Standage is at the Naval Academy and will remain there until the preliminary injunction hearing Oct. 30, the attorney said.

The hearing will be done remotely because of restrictions designed to slow the spread of the coronavirus, and it will not be open to the public, McFadden said. He declined to comment further.

Standage’s lawsuit names only Secretary of the Navy Kenneth J. Braithwaite and Buck as defendants, but a host of other academy community members — including leadership, alumni, current students and even family members — are listed in the lawsuit and in its exhibits as part of Standage’s argument that his First and Fifth Amendment rights were violated.

Standage, 21, is from Moorpark, California, and is studying aerospace engineering at the Naval Academy. His parents are both Los Angeles Police Department officers, according to the lawsuit.

In June 2020, during the nationwide protests following the police killing of George Floyd, Standage tweeted out several statements, which his attorney says were in response to other tweets. The lawsuit includes the tweets as part of their exhibits. Exhibit A, which includes all of the Standage tweets in question, is 35 pages long.

Tweets cover a range of topics, from the protests, Breonna Taylor — a Black woman shot and killed by police — and Navy football.

The tweets contain racist statements, including that Taylor received justice when she was killed, call for military action against protesters, often labeled as belonging to antifa, an umbrella term for leftist groups that resist neo-Nazis and white supremacists through measures that can include violence, and comments about police force.

In one comment, Standage responded to a tweet asking the mayor of Los Angeles if he remembered letting police kill unarmed people by saying: “If he let them do that, these riots would’ve been over a lot quicker.”

In the lawsuit, McFadden describes Standage tweeting during an emotional time because of concern for his parents, who were both called into work during protests and riots in Los Angeles.

After the new chairman of the Board of Visitors laid out the need for change in 1996, McFadden was publicly critical of the direction the Naval Academy was taking.

“What is wrong with the Naval Academy is what is wrong with America. Like many American institutions — church, family, community organizations — the academy and its values have been under cultural attack for the last 30 years,” he wrote in a guest column for The Capital. “It has been fighting a losing battle against the tides of deconstruction, moral relativism, cultural narcissism, and radical individualism.

“Into the resulting vacuum of core values have rushed naval leaders who — rather than displaying subservience to a set of transcendent institutional principles, such as ‘duty, honor, and country’ — reserve to themselves the right to define the institution’s values.”

McFadden was quoted by The New York Times as describing the academy as having a “bad-boy environment” with students encouraged to break rules.

He has represented midshipmen who did just that.

In 2017, he negotiated a settlement for a midshipman who had been arrested after breaking into a private home while drunk. McFadden got prosecutors to agree to set the charges aside as long as the midshipman stayed out of trouble for a year.

The following year, McFadden represented then-Midshipman Ted Colter, who was separated from the academy for racist language. In another guest column for The Capital, McFadden argued that it was not Colter’s language but rather that it was that he was white and using the language.

“The same ‘diversity justice system’ that a year ago kept former Secretary of the Navy Jim Webb from accepting his well-deserved Distinguished Graduate Award has savaged yet another white male connected with the Naval Academy: an 18-year-old plebe named Ted Colter,” he wrote.

McFadden served his five years in the Navy as a nuclear propulsion engineer and surface warfare officer before getting his law degree in 1989. He’s owned his own law firm for the past two years, according to his LinkedIn page.

According to Standage’s lawsuit, McFadden’s renewal with the Maryland Bar is pending.

Buck is listed as one of the defendants in the lawsuit because he is the only officer at the Naval Academy who can recommend separation.

According to the lawsuit, Buck interviewed Standage on Sept. 23, with the lawsuit describing it as “less of an interview and more of a lecture.”

The lawsuit claims that Buck did not believe that Los Angeles Police Department officers, including Standage’s parents, were at risk during the protests and riots, questioned if Standage’s views about military force against innocent civilians were Standage’s views or his parents’, attempted to break attorney-client privilege and criticized Standage for filing an appeal.

The lawsuit also claims Buck told Standage that the military did not need any more smart officers but rather officers of character.

Braithwaite, too, is an alumnus of the Naval Academy. He graduated in 1984, the year after Buck. He became the secretary of the Navy in May 2020.

He is listed as one of the defendants in the lawsuit because he is the only official in the Navy able to expel a midshipman.

The commandant recused himself from the investigation into Standage, according to the lawsuit. However, his views about racism, including that the academy community should educate itself on racism and that the academy should move from being not racist to anti-racist are cited as evidence that Standage did not receive a fair and impartial trial.

The commandant’s teenage daughter, a high school student, is included in the lawsuit as evidence that her father could not be impartial because of her views on racism and police officers.

The teenager’s tweets are included in the lawsuits exhibits. Her Twitter account, which is no longer active, had her bio as “acab and abolish ice,” according to screenshots in the exhibits.

One tweet from the teenager calls for Standage to be kicked out of the academy.

The commandant’s mother, Theresa Buchanan, is also listed in the lawsuit, which claims she endorsed her granddaughter’s opinion that Standage should be removed from the academy.

Although Matthewson is not listed as a defendant, Standage’s adjudication before the deputy commandant is used to demonstrate how the midshipman did not receive a fair and impartial trial, according to the lawsuit.

“MIND Standage’s adjudication before the Deputy Commandant on [date] [sic] was nothing of the kind; the Deputy was not interested in getting to the truth,” according to the lawsuit.

According to the lawsuit, the deputy commandant allegedly allowed his personal views prevent him from fairly adjudicating Standage and discriminated against the midshipman in such a way that violated Standage’s First Amendment rights.

One of the arguments McFadden makes in the lawsuit is that the academy does not investigate tweets that are political in nature but are liberal or against the police.

The lawsuit uses the argument to show the Naval Academy has adopted an agenda that draws on the tenets of the Black Lives Matter movement and anti-racism.

Included in the exhibits are approximately 50 pages of screenshots of tweets, including Buchanan’s daughter, that McFadden describes as liberal.

Some tweets included are from Navy football players, including Midshipman Cameron Kinley. Kinley declined to comment on his tweets being included.

At least one other tweet is from 2019 academy graduate Ensign Mike Martin, who tweeted on July 5, “I 100% think you should be able to put your hands on racist mids and not get in trouble.”

Martin said he does not mind that his tweet is included in the lawsuit’s exhibits. He stands by it.

Martin does not think that Standage would say what he did on Twitter in person. But at the same time, he thinks Standage knew what he was saying. Standage tweeted as if no one would find out, he said, including saying Taylor received justice when police shot and killed her.

“I think the biggest one for me was the Breonna Taylor tweet,” Martin said. “That was a pretty heavy read.”

Another midshipman whose tweets are splashed all over the exhibits is Khalil Martinez, who did not return a request for comment in time for publication.

His tweets, which McFadden called very liberal, have been referenced as concerning an anonymous app Jodel, which midshipmen use.

Screenshots from Jodel, especially about the football team and non-athletes, are also included in the exhibits.

Senator Calls on Army Secretary to Give New West Point Cadets Access to Uniforms that Fit Women
Marines Activate Camp Blaz on Guam, The Corps’ First New Base Since 1952