RBG Was a Military Spouse, Too: Here’s How She Impacted Us 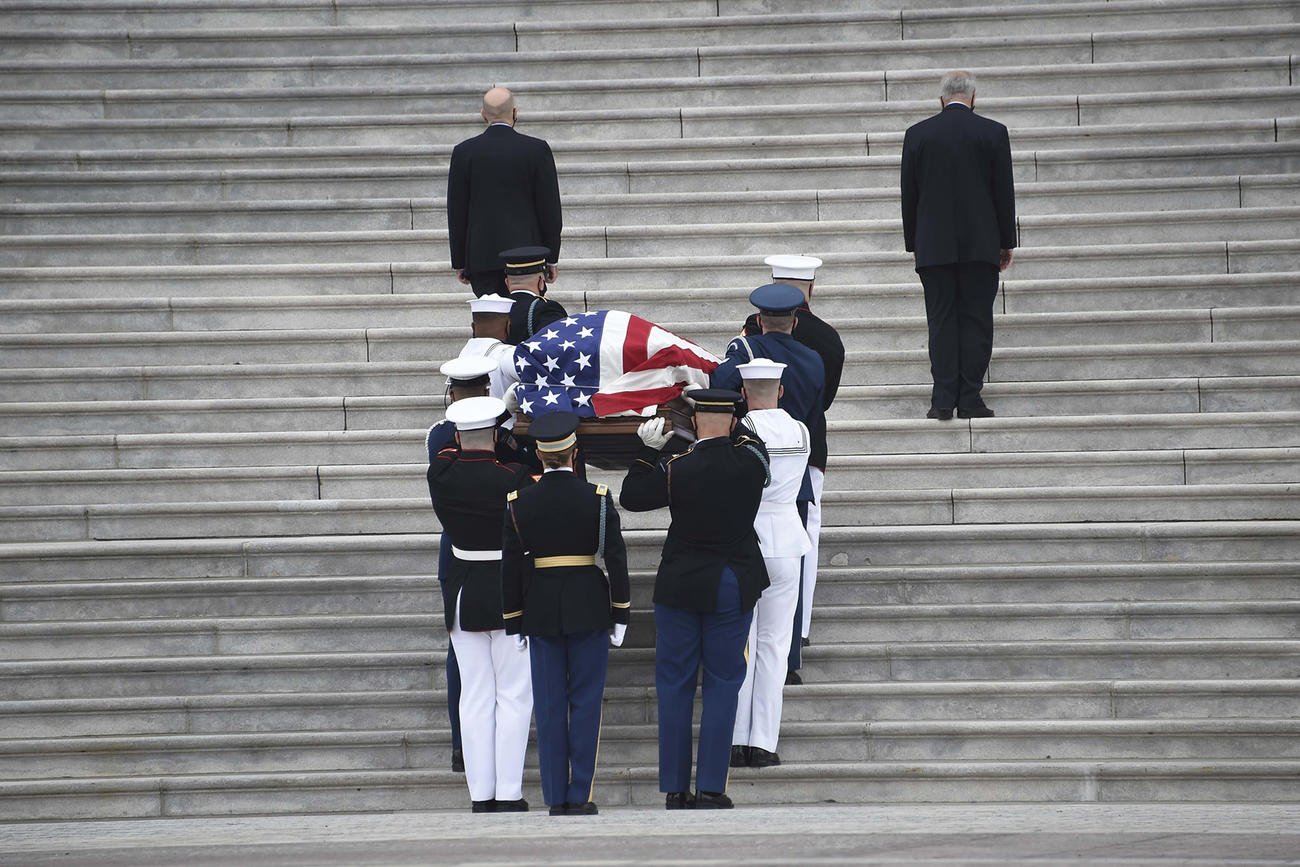 May her memory be a blessing.

Military spouses are sharing the impact Associate Justice Ruth Bader Ginsburg had on their professional ambitions and personal lives.

Ginsburg’s husband, Martin, served in the Army Reserve, leading the couple to be stationed at Fort Sill, Oklahoma, in the 1950s. Her military affiliation and courtroom dissents made her a natural icon to military spouses who say they can relate to the justice’s history of facing — and fighting — barriers.

Libby Jamison, a Navy spouse of 17 years, currently works in an attorney role for the Department of Veterans Affairs. She enrolled in law school in 2004, shortly after getting married and encountering roadblocks to employment in California.

“I think like a lot of us [military spouses], I had no professional network in San Diego. I didn’t know a single person, so I was just throwing out my resume and hoping someone would bite. … Law school had always been in the back of my mind but I wasn’t sure I could ever pull it off. Since I wasn’t having success getting a job, I decided to take the LSAT and apply to law school,” she said.

Jamison says in law school everyone “knew who the justices were,” but she didn’t make the connection between Ginsburg and the military until a special event that included members, like Jamison, from Military Spouse JD Network (MSJDN) — an organization that advocates for licensing accommodations for military spouses, including bar membership without additional examination, according to its website.

“MSJDN does a Supreme Court swearing in — a lot of groups do that — where you can take 12 folks and be admitted to the Supreme Court as an attorney. It’s more symbolic because most of us aren’t ever going to argue in front of the Supreme Court,” she explained. “I did that in 2013, and so as part of that I started reading more about the court and the justices, and that’s when I stumbled across the military spouse connection [with Ginsburg].”

That network of “lady lawyers” immediately leaned on each other in the hours after learning the 87-year-old justice had passed away on Sept. 18.

“I think I just yelled out ‘no’ in my apartment and was immediately really sad. And then text messages started pouring in from all my fellow lady lawyers and everyone was just collectively mourning, especially because we have claimed RBG as a military spouse attorney,” Jamison said.

In 1956, Ginsburg was one of only nine women at Harvard Law School. She then tied for top of her class at Columbia Law School three years later. Despite those accomplishments, she was rejected for a clerkship at the Supreme Court because of her gender, according to the ACLU’s Women’s Rights Project.

Jamison says Ginsburg’s ultimate success with an unconventional path is something spouses can relate to and should embrace.

“I have been thinking about her legacy a lot the last couple of days. At the time, the process was you graduate law school, you become an associate, you work your way up to partner. That was a normal legal career and that’s not what she had. And she talked about that being a strength and how she probably would not have made it to the Supreme Court if she had gone that traditional route. … I think there’s a really big lesson there, especially for military spouses because we all have that non-conventional career path, no matter how hard we try. Maybe you end up on a different path than your peers, but maybe it ends up being a better path,” Jamison said.

The Brooklyn-born justice served more than 27 years on the Supreme Court, leaving a legacy as “a tireless and resolute champion of justice,” Chief Justice John Roberts, Jr. stated in a press release.

Josie Beets, Army spouse and former president of MSJDN, says she will remember Ginsburg for positioning herself “not just for equality but for a structural change in the way we take on roles in society.”

“She always said … it’s not about women’s liberation, but it’s about men and women’s liberation and this idea that in some ways men are just as locked into their roles that we as a society frame for them, as women are,” Beets said. “Can we be a society that allows men to be more compassionate and to have more of a role in their family, in their day-to-day lives and also be a society that allows women to excel at work without being the de facto caregiver?”

Beets was inspired by her mom to pursue law school and remembers watching Supreme Court hearings as a child.

“My mom went to law school when I was seven and my sister was three. And I remember waking up in the middle of the night and going into the dining room of my grandmother’s house and my mom typing away. … the other piece is I remember watching as a little girl the Anita Hill-Clarence Thomas hearings and just feeling like they were being so mean to her and that that was unfair. I learned early on the Supreme Court is important, in ways that I can’t fully understand as a 10- or 11-year-old, and that women didn’t always get a fair shake — and I carried that with me,” she said.

“She [Ginsburg] has opened so many doors that were just painted shut. It’s always been our job to walk through them, but we just have to do it with real vigor and intentionality now. And if we don’t take advantage of the lifetime of opportunities that her work gave to us, we’ve missed our chance,” Beets said.

She adds the best way for military spouses to honor Ginsburg’s life is to “bring someone with you.”

“Particularly in the spouse world, whether your primary role is as the at-home caregiver for family or you’re in the working world, bring someone with you. We are in new situations all the time and we are so challenged all the time, make someone’s challenge a little less burdensome and bring them with you — whether that’s to a networking event or just to lunch with a neighbor to introduce a new spouse to a community. Justice Ginsburg never closed the door behind her. She always brought others up with her and we all have the power to do that every day,” Beets said.

Ginsburg’s journey to the highest court isn’t the only thing she is being remembered for. Her decisions from the bench had a profound impact on the lives of spouses like Brian Alvarado, husband of a now-retired sailor.

Alvarado says he began paying attention to Ginsburg as the fight for marriage equality was taking shape.

“Really 2011, 2012 those years when Prop 8 was really affecting our lives — whether or not our marriage was going to be recognized — that’s when I really started to study who’s who,” he said.

Proposition 8, known as Prop 8, was a California ballot proposition and a state constitutional amendment passed in the 2008 California state election that opposed same-sex marriage, according to Georgetown Law Library. The Alvarados lived in the state at the time.

“When you are in a relationship and you’re not allowed to go about the normal process of growing the relationship, getting engaged, getting married and that whole process — when you have a law in place that dictates that for you, it is a constant thought. It is a constant part of your daily thought process. Imagine that a million times more intense being in a relationship with somebody in the military where there’s already this huge discrimination and generations-long policy and environment where that just wasn’t allowed or wanted in the community,” he said.

Alvarado described it as feeling like he had no control over his life. Military spouses from same-sex relationships were prevented from moving with their partners, attending command functions or participating in normal volunteer roles.

“Then all of a sudden there is a beacon of hope in a lawsuit or a potential bill or whatever it is that is being presented, you know it’s going to be a long fight but that beacon of hope makes all of that constant anxiety and fear turn right into aggressive positivity,” he said.

The beacon of hope was called Obergefell v. Hodges and it came on June 26, 2015.

“I remember it like it was yesterday. Our phone started going off and the first thing I did was look up the actual written verbiage [of the decision]. I felt like it wasn’t real and I remember in that moment reading and crying and it was like all of those years of weight of being scared of upsetting my husband’s career, afraid of even going onto a military installation … it felt like that light at the end of the tunnel was sitting in my living room,” Alvarado said.

“Nine people sitting in a room hearing opposition and hearing from Jim Obergefell — and then those nine people make a decision, a 5-4 decision, those five people in that moment gave me the right and privilege to live the life that I get to live now. That’s a powerful thing. She [Ruth Bader Ginsburg] changed my life forever.”

Alvarado added that the most effective way that he and others can “continue to bless this country with the legacy of Ruth Bader Ginsburg is for everybody to fight and believe in equality for all human beings.”

Ruth Bader Ginsburg will be buried during a private interment service at Arlington National Cemetery, according to a Supreme Court press release.