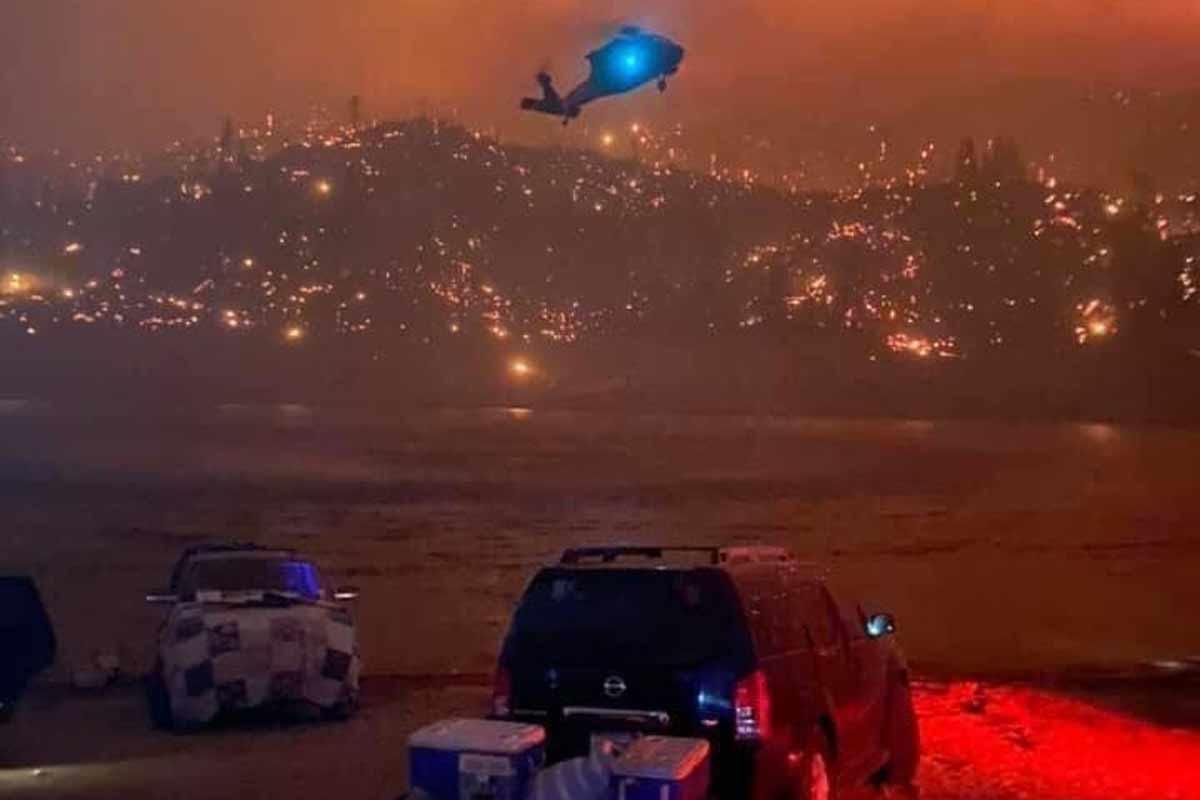 The 40th CAB, headquartered in Fresno, participated in rescues on Sept. 5, into the early morning of Sept. 6, and again on Sept. 8, according to a California National Guard release.

Sgt. George Esquivel, a CH-47F Chinook mechanic and flight engineer with Bravo company, 1st Battalion, 126th Aviation Regiment, based in Stockton, California, said in the statement that he was enjoying time with family when he received the call.

“I received a text about a rescue mission asking if I wanted to go and I replied yes. I don’t turn down the opportunity to go on rescue missions because it’s what we do,” Esquivel said.

The 40th CAB Commander, Col. David Hall, deployed rescue assets immediately when he saw an announcement on social media about the fire near Mammoth Pools.

“I contacted the Joint Operation Center in Sacramento to see if they heard anything about it,” Hall said in a released statement. “After that was confirmed, and I knew a CH-47 crew was in the works, I immediately called one of the senior pilots in Fresno, Chief Warrant Officer 5 Kipp Goding and asked him to assemble a UH-60 crew and let me know when he was ready to go out and assist at Mammoth Pools.”

“I started the preflight inspections to prepare our aircraft for the evacuation,” Hernandez, with Detachment 1, Bravo Company, 1st Assault Helicopter Battalion, 140th Aviation Regiment, said in the statement. “Once we were able to establish communication with CAL FIRE, we headed into the designated point right behind the [Chinook] crew.”

The combined effects of limited visibility from darkness and the heave smoke, extreme heat, and the use of night vision goggles set obstacles for this mission, though the pilots, crew chiefs as well as the flight engineer are adapted to wildfire missions.

“I can’t really describe my initial reaction because training just kicked in,” Esquivel said in the release. “One of the first things that we all agreed on was we need to put the aircraft down safely. Without the aircraft and the crew being safe, there is no mission, we can’t help anyone out. Our job was to make sure we landed, and when we did land, I was met with the worst sight of my life. A lot of people referred to the sight as apocalyptic, and I agree.”

The release states more than two hundred people at Mammoth Pools needed to be evacuated immediately around the flames.

“We saw the Chinook crew loading up passengers and hovered above them until they were complete,” Hernandez said. “Every opportunity that we had to go out and rescue people, we had to choose a different route to enter from because the winds were shifting every time we went out.”

Hernandez said 65 survivors, including campers, hikers and residents, boarded onto the aircraft for the first evacuation, noting that his dual-rotor and heavy-lift CH-47F can carry about 30 personnel for one time.

“Sgt. Powell and I focused on the critically injured, women and children,” he added. “On the second lift, it was 102 people, and the third lift it was 37.”

Sgt. Esquivel provided extra protection for a 2- to 3-week-old infant on one of the flights.

“I wouldn’t have been able to live with myself if I had put this child on an aircraft without hearing protection,” said Esquivel. “We had an extra headset available and I gave it to the mother of this child and told her to cover the child’s ears until we land, and she did.”

Communication and the professionalism of the Soldiers of the 40th CAB made this mission complete successfully.

“I heard chatter over the radios that they were heading to Fresno,” said Hall. “When I heard that, I immediately dropped what I was doing and I headed there because I was anticipating a mass casualty scenario. On the way here, I contacted the flight operations section in Fresno and informed them they need to give emergency personnel and heads up and let them know that an unknown number of passengers will be arriving.”

Emergency Medical Services and Fresno law enforcement agencies set up a check-in and screening process and prepared medical care for passengers who needed it. Soldiers of the 40th CAB and the 1106th Theater Aviation Sustainment Maintenance Group voluntarily assisted with screening and set up cots for passengers who needed a place to rest, until they were picked up by their families.

In all, 242 people were rescued from Mammoth Pools in a single night, according to the release.

“I believe our training came into play with this mission. My situational awareness and senses were heightened for the whole time,” Hernandez said. “We appreciate the praise that we’re getting, but we’re not a godsend or special people, we’re just ordinary people that did our job. This is what we do and we love it.”

After the night of Sept. 5, helicopters could not land to make more rescues due to poor visibility. During a clear period on Sept. 8, the 40th CAB helicopters evacuated another 175 people from China Peak, Lake Edison and Muir Trail Ranch across the thinner smoke.

The urgent rescue missions ended by the end of the week, the release states. The 40th CAB transitioned back to its normal role assisting CAL FIRE in water drop operations.

“When you’re training, take it seriously,” Esquivel said, speaking after completing the missions successfully. “My father always told me, there is a time and place for everything. When it’s time to go to work, it’s time to focus and go to work.”

“We could have easily said no to this mission because of the dangers, but something within us was saying, no, we’re ready, go on ahead,” he added.

— Bing Xiao can be reached at bingxiao2020@u.northwestern.edu.