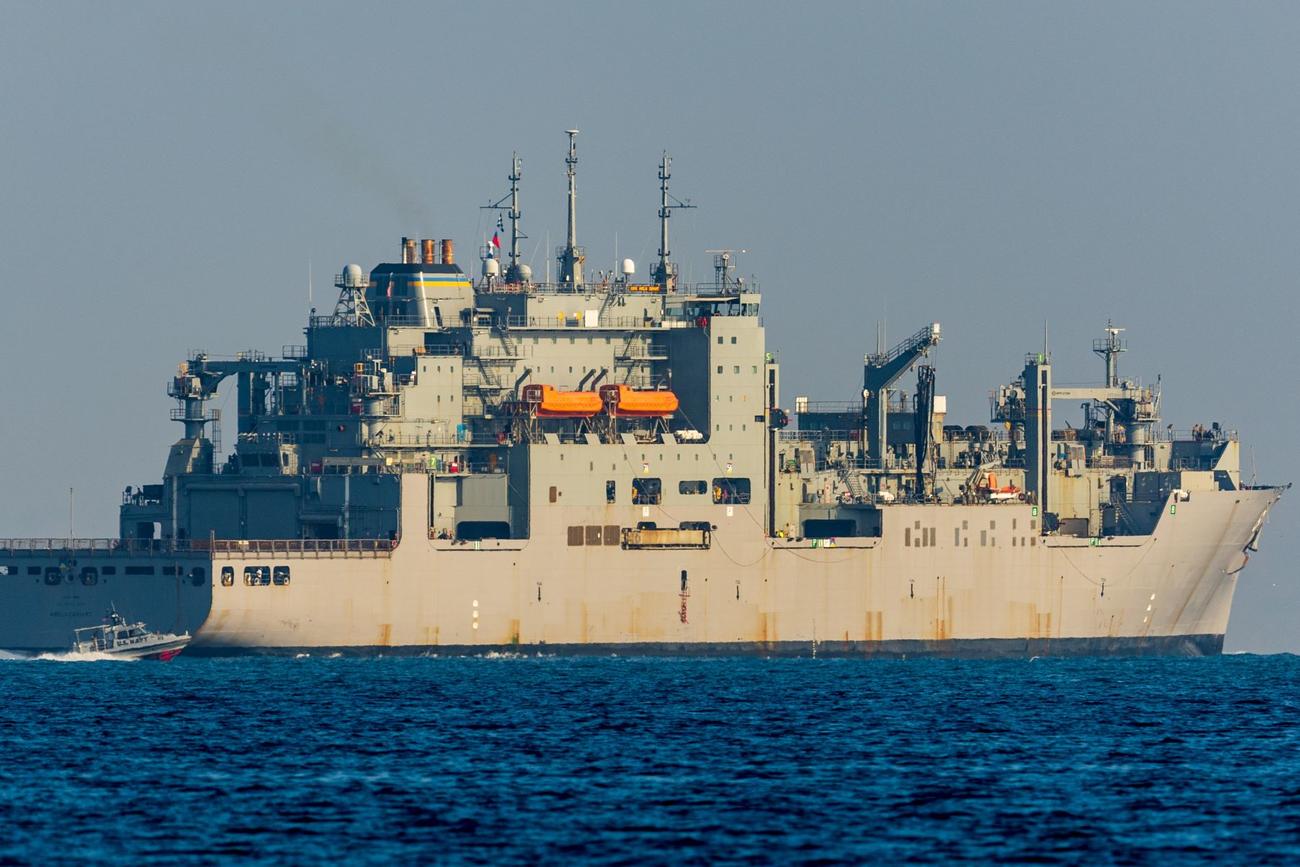 The seaman knew he needed to see a doctor. Stationed aboard a transport ship in Guam in May, the mariner’s blood pressure had been worryingly high for multiple readings and he wanted to get off the ship and to a hospital.

Several times, he would later tell The Virginian-Pilot, those in his chain of command discouraged him from doing so. Because of a “Gangways Up” order issued in March to prevent the spread of the coronavirus, they didn’t want to let him ashore unless it was absolutely critical.

The seaman, who spoke with The Pilot on condition of anonymity for fear of retribution in the maritime industry, eventually left his ship later that month to see a doctor anyway and never returned to his ship — or his job. He decided he wasn’t willing to undergo the 14-day, one-room quarantine that his command told him would be necessary.

Talking later with his crewmates, “they were extremely happy I got out,” he said.

“It’s sort of a feeling that I got out of prison.”

More than 5,000 civilian mariners who work for the Navy’s Military Sealift Command are affected by the “Gangways Up” order. With few exceptions, they have been stuck aboard their ships for months. Sometimes they are prevented from going home to their families who live just miles away, like in Hampton Roads.

Meanwhile, they’ve watched military personnel and contractors come on and off and go home to their families at night — not bound by the same rules.

“There is growing anger, frustration and despair throughout the fleet,” three unions that represent civilian mariners wrote in a letter last month to Rear Admiral Michael Wettlaufer, who heads the command. “People have a breaking point and many of these crewmembers are nearing it.”

Recently, the command has allowed some leave, though each exception must be individually approved.

The unions are pressing the Navy in arbitration. One mariner took his life earlier this summer, and the unions say the despair among mariners could have contributed.

“This is unprecedented,” attorney Darrin Gibbons said. “I haven’t talked to anyone who isn’t baffled by it.”

“We understand the strain that liberty restrictions put on our Mariners and their families, but we are operating in unprecedented times and these actions are critical to ensuring their safety,” Morris wrote. “The risk from COVID-19 could severely debilitate afloat forces and negatively impact MSC and Fleet missions. As our understanding of COVID-19 improved, so too did our protective posture and counter-COVID tactics.”

United States Naval Ships — USNS — are different from military ships with a USS designation. They are non-commissioned and primarily operated by civilian crews. There are about 125 worldwide, including the hospital ship Comfort and more than a dozen others based in Norfolk.

Some mariners work for private companies that contract with the Navy.

The command issued the “Gangways Up” order March 21, suspending all liberty and leave for civilian mariners worldwide in an effort to contain the coronavirus.

Morris said in the statement that the decision followed travel restrictions announced by the Department of Defense at the time. Even before the coronavirus took off in the U.S., it was impacting countries where the command made port visits, she said.

The order took mariners by surprise. At the time, some said they were unable to go home to pack bags for the indefinite stay and had cars towed.

Capt. Kevin Tapp, who leads the USNS Trenton — currently off the Sicilian coast — said he’d been on his way to training in San Diego when he was told to proceed to Norfolk and get on board a tanker leaving for the Mediterranean. He parked his car in a storage lot and flew here.

On the Trenton, they started stopping in European ports where COVID-19 cases were few and local authorities were allowing people to come into town. But the Navy’s order didn’t allow that, so the crew stayed on board, admiring the summer scenes from afar, according to Tapp, the lead complainant in Gibbons’ EEOC action.

More recently, Tapp said, the Navy’s allowed his mariners to get off the ship only within military bases. That usually means they can pick up a few items at the commissary and then return.

Some mariners also are struggling because they’re months behind their scheduled relief dates. One member of Tapp’s crew is 110 days past due, he said. Three mariners walked off because they couldn’t take it, he said.

Tapp believes this is turning into a recruiting problem.

“The word is out that look, if you want to come work at MSC, you can pretty much look forward to a floating prison,” he said. “People go to sea because they want to see the world. They’re not looking forward to embarking on a prison ship and being locked on board.”

The frustration comes from the disparate treatment, mariners say. As federal workers, they’re confined to ships while military personnel are not under the same order.

“We’ve been in ports in Europe where there are U.S. Navy personnel assigned and they’re just walking around,” Tapp said. “They’re living in wonderful apartments in town and coming to work (on the ships). To know our own commanders are stationed here in Europe and able to go home every night, it’s very frustrating.”

Morris said the civilian mariner workforce is small and highly specialized and that they are “essential critical infrastructure workers.”

“Because our ships are operated by civilians, crewing levels and crew organization aboard our vessels reflect the standards found aboard civilian commercial ships rather than combatant ships,” she said in the statement.

Unlike Navy sailors, the mariners don’t receive permanent change of station orders to ships, she noted. Instead, they are assigned to a vessel for a set amount of time and then rotate ashore for leave and training before returning for ship duty.

Tapp said officials “need to strike a healthier balance that takes into consideration that we’re humans and not just a piece of infrastructure.”

The seaman on the ship in Guam said he was out of soap for several days because they weren’t allowed to get off and buy more.

“I have seasoned officers who are unable to go buy feminine hygiene products,” said Randi Ciszewski, government fleet representative with the International Organization of Masters, Mates & Pilots. “They have to ask their young, male, military counterparts to pick them up tampons. I have elderly captains that can’t buy their hemorrhoid cream.”

Anybody “that wants to put a big toe on the pier” has to get an exception personally approved by top leadership, she said.

The command has approved nearly 90 exceptions as of this week, Morris said, “that have allowed most mariners afloat to have some leave and liberty.”

The exceptions are determined “based on local COVID-19 conditions and mission assurance factors,” according to the command. They also consider “a mariner’s individual situation in regards to the need for medical appointments and/or picking up prescription medicines, amount of time already assigned to a ship, family visitation opportunities, and pending orders to sail on mission.”

After liberty or leave, mariners are usually required to enter a 14-day quarantine.

Ciszewski said the unions are concerned about the mental health impacts of the mariners having to spend long stretches without being able to leave ships.

“They are really suffering,” she said.

“The actual cause of this mariner’s actions may never be known, however, the ongoing and selective ’Gangways Up’ restrictions may have, in some part, contributed to this unnecessary and senseless act,” the unions wrote in their joint letter a week later.

Morris said it would be inappropriate to comment on the death while the Naval Criminal Investigative Service is still investigating.

In the federal complaint, Tapp and others argue that the Navy is discriminating based on age.

They note a letter that Steven Cade, the command’s executive director, sent earlier this year to U.S. Sen. Maria Cantwell of Washington state. In it, he laid out one line of reasoning for the restrictions.

“Our mariner work force is small (5,400), highly specialized and significantly older on average (47) than their active duty counterparts making them potentially more vulnerable to effects of the COVID-19 virus,” Wade wrote.

Gibbons said in the EEOC complaint that the commander’s “speculation” about the work force’s potential vulnerability “is not an appropriate legal justification to keep thousands of employees locked up. This policy is discriminatory on its face.”

Morris said she could not comment on the complaint because it is ongoing.

In arbitration with the Navy, the unions are arguing that if the restrictions go on, employees should at least receive compensation for it under their contract.

The restrictions have also not prevented COVID-19 outbreaks on the naval ships, said Kate Hunt, vice president for the government services division at the Seafarers International Union.

There was one aboard the oiler Leroy Grumman earlier this year, for example. One crew member died.

Navy officials said in the statement that while the defense department “does not release the number of infected individuals at the unit, facility or geographic area level due to operational security, we are confident that the order restricting mariner liberty has been effective.”

“We understand it’s unprecedented times, and the stated purpose of the order is to protect the wellbeing” of civilian mariners, she said. “But right from the beginning the order wasn’t implemented in any fair way. … You can’t take the position you’re protecting them from COVID with all these other people coming (on board). This isn’t right.”

This article is written by Katherine Hafner from The Virginian-Pilot and was legally licensed via the Tribune Content Agency through the Industry Dive publisher network. Please direct all licensing questions to legal@industrydive.com.