The Intense Rules for US Marines Who Protected Mail from Gangsters 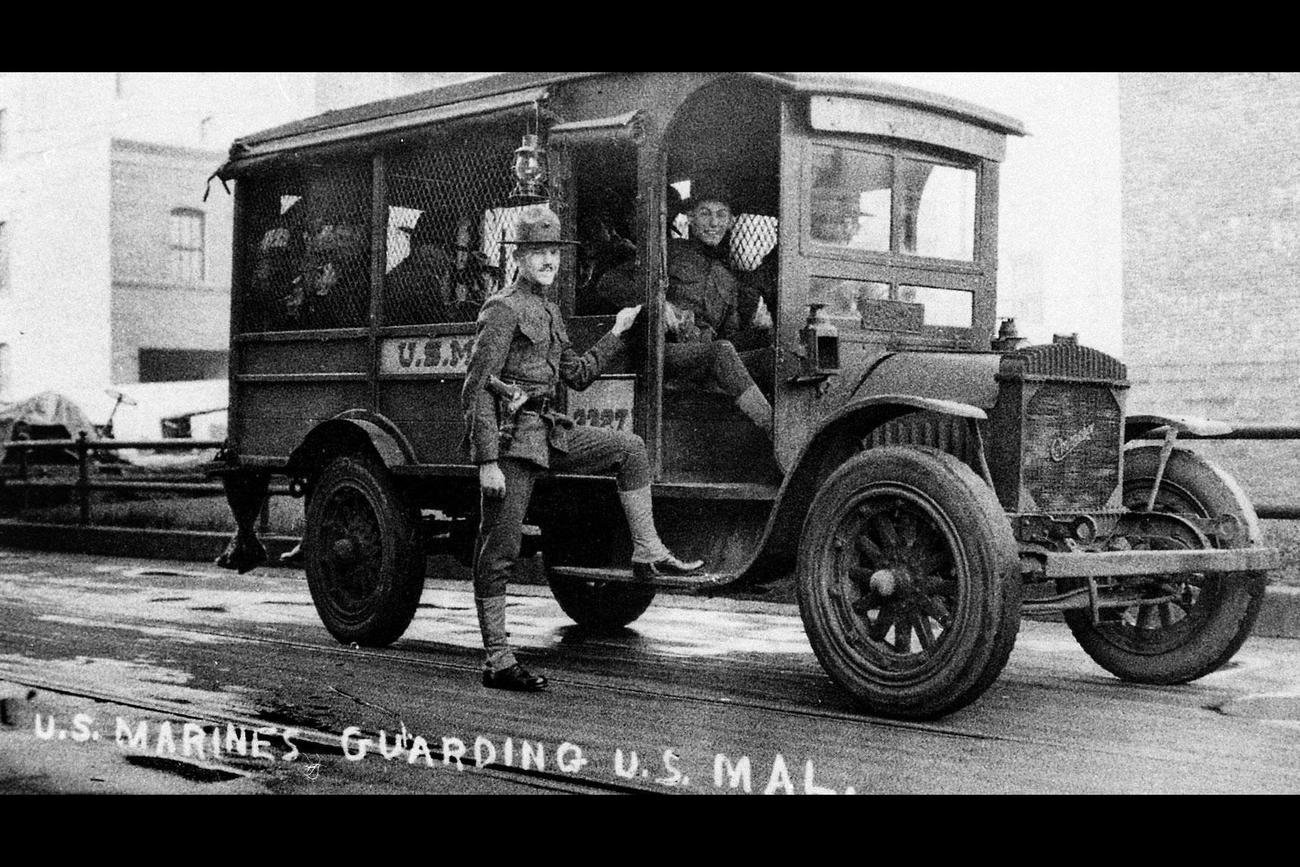 “When our Corps goes in as guards over the mail, that mail must be delivered,” wrote Secretary of the Navy Edwin Denby. “Or there must be a Marine dead at the post of duty. There can be no compromise.” It was the Golden Age of the Gangster, when bank robbers were folk heroes, cheered on by citizens who were suffering under the weight of Prohibition and the Great Depression. But when the mail started getting robbed by these hoods, the Postmaster General asked President Harding to send in the Marines.

In October 1921, gangsters hit a mail truck in New York City, making off with $2.4 million in cash, securities, and jewelry – $34 million dollars when adjusted for inflation. That wasn’t the only high-stakes robbery. Between April 1920 and April 1921 alone, thieves stole more than six million dollars in U.S. mail robberies – $85 million when adjusted for inflation. So when the Postmaster asked the President for the Marines, the Commander-In-Chief was happy to oblige.

Harding instructed Secretary of the Navy Edwin Denby to meet with Commandant of the Marine Corps Maj. Gen. John Lejeune to “detail as guards for the United States mails a sufficient number of officers and men of the United States Marine Corps to protect the mails from the depredations by robbers and bandits.”

Marines from both coasts were activated and armed with trench guns, M1911 pistols, and the M1903 Springfield rifle to stand watch as high-value mail deliveries were moved between institutions, large cities, banks, and government offices. They rode mail trucks and trains, often seated with the driver and in with the valuable cargo. The Navy Secretary told his new detachment of 50-plus Marines and officers:

“To the Men of the Mail Guard, you must when on guard duty, keep your weapons in hand and, if attacked, shoot and shoot to kill. If two Marines are covered by a robber, neither must put up his hands, but both must immediately go for their guns. One may die, but the other will get the robber, and the mail will get through. When our Corps goes in as guards over the mail, that mail must be delivered, or there must be a Marine dead at the post of duty. There can be no compromise.”

That was the spirit of the orders. The orders themselves were just as intense.

1. To prevent the theft or robbery of any United States mails entrusted to my protection.

2. To inform myself as to the persons who are authorized to handle the mails entrusted to my protection and to allow no unauthorized persons to handle such mails or to have access to such mails.

3. To inform myself as to the persons who are authorized to enter the compartment (railway coast, auto truck, wagon, mail room, etc.) where mails entrusted to my protection are placed, and to allow no unauthorized person to enter such compartment.

4. In connection with Special Order No. 3, to prevent unauthorized persons loitering in the vicinity of such compartment or taking any position from which they might enter such compartment by surprise or sudden movement.

5. To keep my rifle, shotgun, or pistol always in my hand (or hands) while on watch.

6. When necessary in order to carry out the foregoing orders, to make the most effective use of my weapons, shooting or otherwise killing or disabling any person engaged in the theft or robbery, or the attempted theft or robbery of the mails entrusted to my protection.

The FAQ section of the Mail Guards’ training manual tells you everything you need to know about how Marines would respond to this robbery problem, once the gangster tried to break in:

“Q. Suppose he [the robber] is using a gun or making threats with a gun in trying to escape? A. Shoot him.

Q. Suppose the thief was apparently unarmed but was running away?

Q. Is it permissible to take off my pistol while on duty; for instance, when in a mail car riding between stations?

Q. Is there a general plan for meeting a robbery?

A. Yes; start shooting and meet developments as they arise thereafter.

Q. If I hear the command ‘Hands Up,’ am I justified in obeying this order?

A. No; fall to the ground and start shooting.

Q. Is it possible to make a successful mail robbery?

A. Only over a dead Marine.”

The second time the Marines were withdrawn, people stopped trying to rob the U.S. mail.

MORE POSTS FROM WE ARE THE MIGHTY:

We Are The Mighty (WATM) celebrates service with stories that inspire. WATM is made in Hollywood by veterans. It’s military life presented like never before. Check it out at We Are the Mighty.

© Copyright 2020 We Are The Mighty. All rights reserved. This material may not be published, broadcast, rewritten or redistributed.

Future Navy Warship Completes Trials on Lake Michigan
Ask Stew: When Should I Train and Why?