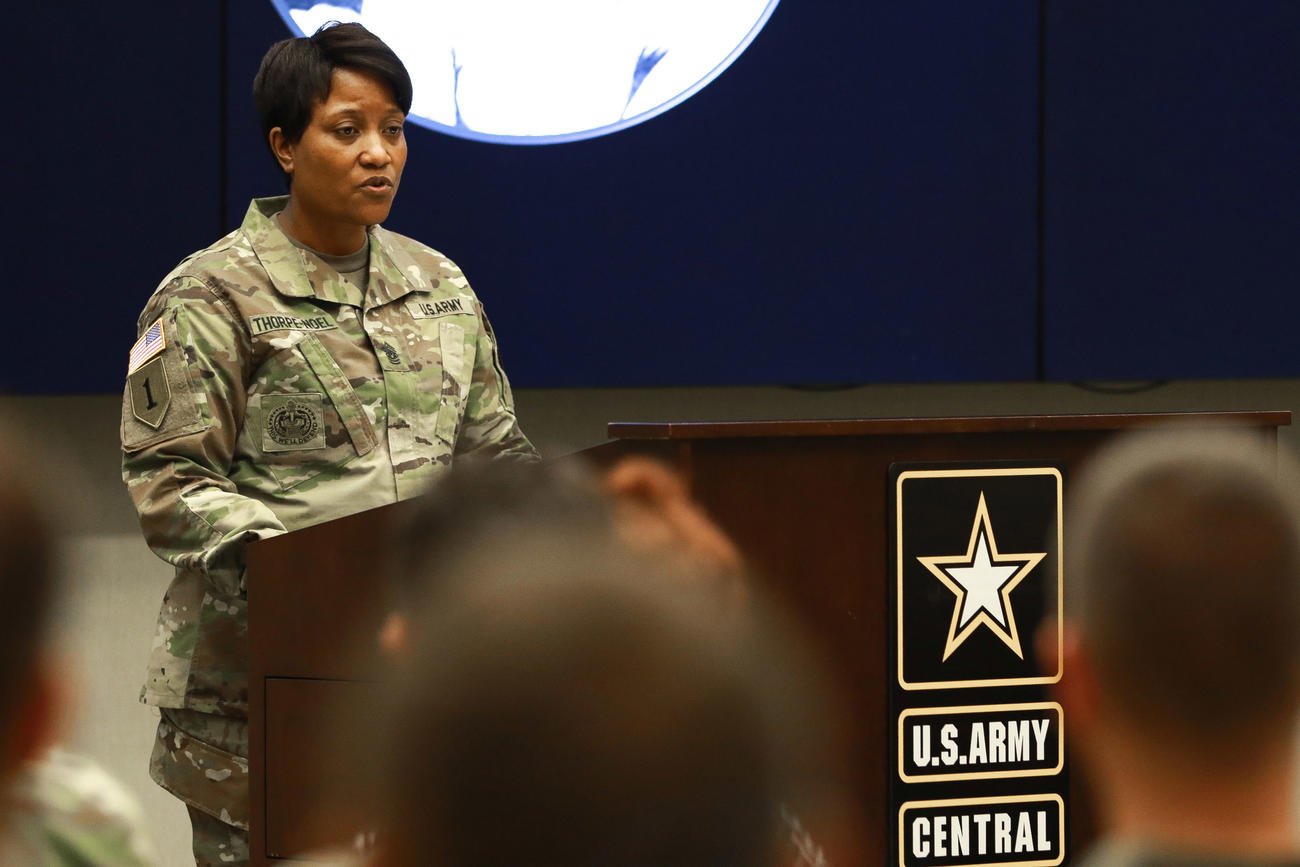 Army Command Sergeant Major Lynice Thorpe-Noel says she has seen her share of bias coming up through the ranks as a Black woman in the military.

“Sometimes maybe I thought it would have been because of color; maybe it might have been my perception that it might have been because of me being a female — I’m not absolutely sure. And to be honest with you, I didn’t let that be an obstacle for me,” Thorpe-Noel, the senior enlisted adviser for U.S. Army Human Resources Command, told said during a virtual discussion with Army women hosted by the Association of the United States Army.

“I wasn’t going to let any barriers or someone else’s biases be my responsibility … I just felt that the best course of action for me to do was just stay the course and move forward and do well at whatever I was doing.”

Read Next: National Guard and US Military Helping to Fight California Fires

Thorpe-Noel was one of four senior women in the Army who participated in the event that came two days before the 100th anniversary of the 19th Amendment, which guaranteed women the right to vote.

A century on, “[the] majority of the country says ‘the country has not gone far enough in giving women equal rights with men,'” said Lt. Gen. Laura Richardson, commanding of U.S Army North.

“While this is a worrisome statistic, the Army on the other hand, wants female soldiers assigned to positions that provide full and challenging career and promotion opportunities,” Richardson said.

Richard acknowledged that the Army still has work to do, since women make up about 18% of the total force.

But the advice she offered was to both female and male soldiers.

“Be confident, learn all you can about your unit and your command, about your job and about your Army,” Richardson said. “Be fit mentally, spiritually and physically, and be competitive. … Set the example. Show your organization what right looks like. That’s how we empower the next generation of leaders.”

Richard added that all soldiers should find a mentor and become a mentor.

Lt. Gen. Jody Daniels, the first woman to become the chief of Army Reserve and commander of Army Reserve Command, agreed with Richardson that mentors are key to guiding future leaders.

Daniels credited the mentors in her career for encouraging her to “take a path that I might not have otherwise followed.”

Daniel’s advice to young female soldiers was to “consider where you want to be two positions beyond now.”

“That may seem like it’s a far way off, but it’s really, really not,” Daniels said. “Take the tough jobs, the stretch positions and then go do the hard work and make the most of every opportunity.”

Kathleen S. Miller, who serves as the administrative assistant to Secretary of the Army Ryan McCarthy, has also served as the civilian deputy to the Army Deputy Chief of Staff G-3/5/7.

Miller said her career with the Army began as a young wife of an Air Force airman during an overseas assignment in 1983.

“While I had an economics degree from Cornell [University], I wasn’t a very good typist and that significantly limited my options for work overseas,” Miller said.

She eventually found work in the comptroller field when her first boss saw potential in her.

“He took a chance on me and hired me and that was the start of a federal career that has allowed me to grow, learn and be a leader not only in finance but also in logistics, in operations and now providing a myriad of support services to the Army’s headquarters,” said Miller, who also studied at the U.S. Army War College.

Thorpe-Noel said she has witnessed women make a lot of progress during her 30-year career, highlighting then-Defense Secretary Ashton Carter’s decision in late 2015 to open all combat arms jobs to women.

Related: Esper Bans Use of Promotion Board Photos, Orders Review of Hair and Grooming Standards