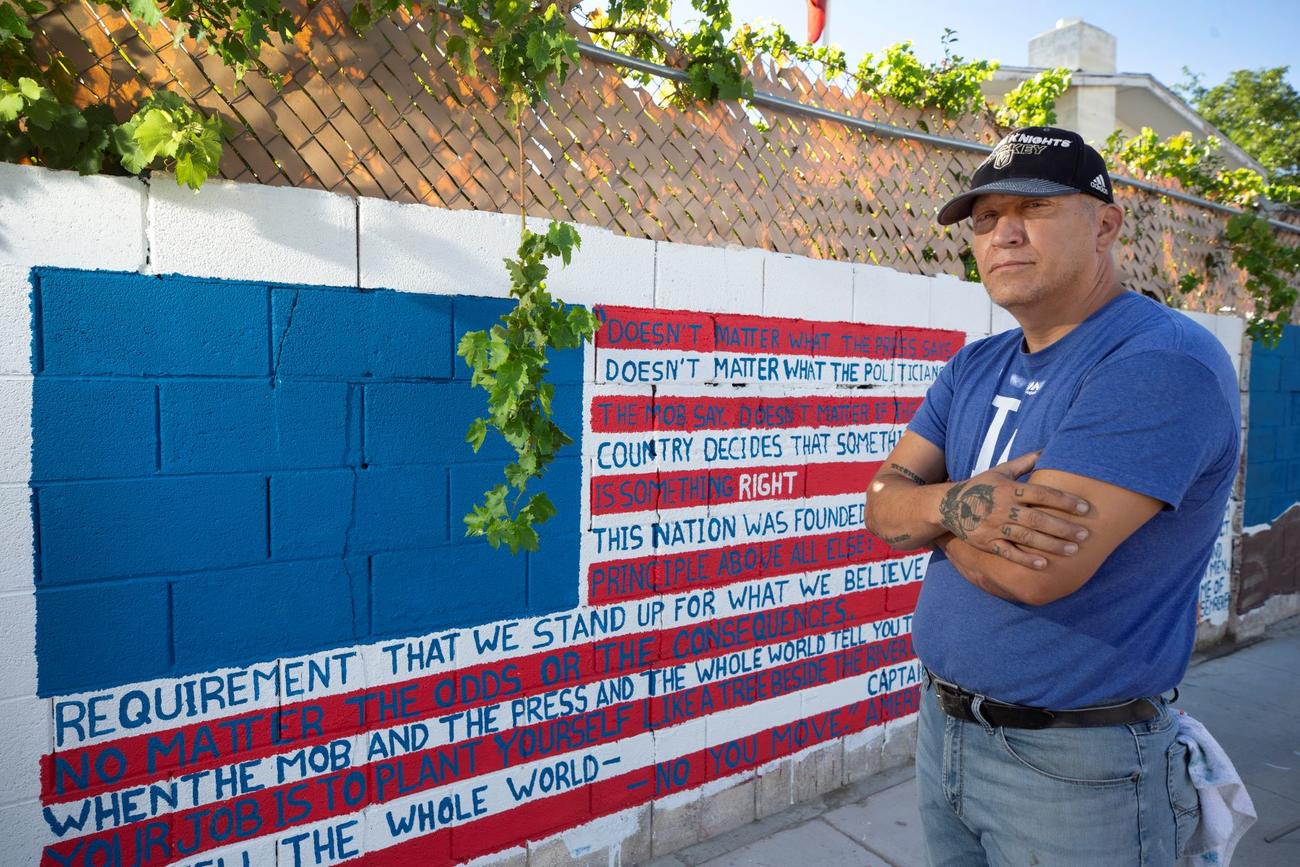 LAS VEGAS (AP) — Cesar Lopez dips a roller in paint and glides it across a mural on a wall outside his Las Vegas-area home.

Chickens cluck near a backyard flagpole with a red U.S. Marine Corps flag waving slightly in the blazing sun.

Lopez called his artwork his tribute to U.S. military service members who have been deported to their native Mexico after getting in legal trouble in the United States.

Lopez, a U.S. Marine veteran, was born in Mexico and arrived in the U.S. as a child in the 1980s. He was deported about eight years ago after a 12-year-old marijuana conviction was discovered during a customs check on a return trip from Central America.

For now, the only way for veteran deportees to legally return to the U.S. is when their remains are brought to the U.S. for a military funeral.

They can also do what Lopez did after being deported in 2012: Hike back across the Mexico-U.S. border to enter illegally.

While most undocumented immigrants might fear being deported, Lopez is actively coordinating with elected officials to help deported veterans return. His efforts were featured in the recent Netflix documentary series “Immigration Nation.”

He said a visit to a Trump campaign office in southern Nevada nearly got him arrested, so he’s not counting on help from that quarter.

Estimates are up to 1,000 veterans are exiled in Mexico. About 250 are affiliated with the Unified U.S. Deported Veterans support group.

Lopez was born in Ciudad Juarez, Mexico. He said his mother moved him and her other children to Los Angeles when Lopez was around 4.

His mother became a citizen after President Ronald Reagan signed the Immigration Reform and Control Act of 1986, granting amnesty to hundreds of thousands of undocumented immigrants in the U.S.

He joined the Marines in 1993, after high school. He recalled fights over discrimination.

“I wasn’t able to hold back,” he said. “It took me many years to be able to take insults and look the other way.”

After his military discharge in 1995, Lopez moved to Las Vegas. A marriage failed and he worked a minimum wage job, stretching his earnings to live, pay child support and his college costs.

In 2000, he was arrested in New Mexico for transporting a several pounds of marijuana. He pleaded guilty and a judge agreed to give him a second opportunity. Lopez did not serve jail time.

His conviction was cleared from his record in less than two years. But his admission of guilt put him on a deportation list.

He returned to Las Vegas, married again, worked construction and became an advocate for homeless veterans.

Twelve years later, he was detained in Houston on his way back from Costa Rica, where he worked a few months as a translator.

He calls the U.S. Immigration and Customs Enforcement facility where he was held a prison.

He was deported four months later from Laredo, Texas, to Mexico. He recalled that while crossing into Nuevo Laredo, a Mexican official saw his Marines tattoos and told him, “I feel so bad for you guys.”

That’s when he learned there were other U.S. veterans kicked out of the country they served.

To prepare to return to the U.S., he hiked 20 miles a day for three weeks in Baja California. He monitored patrols at border crossings U.S. and finally found a place to cross that involved him climbing a mountain.

An acquaintance he persuaded to pick him up on the American side backed out, and Lopez wound up hiking for four nights and three days, avoiding U.S. and Mexican authorities and drug cartel members.

In the U.S., he became an advocate for fellow veterans left behind in Mexico. By 2015, his group was visiting Washington, D.C., and gaining attention from, among others, then-Congresswoman Michelle Lujan Grisham, D-N.M.

In 2018, Grisham was elected governor of New Mexico, where Lopez had been convicted. Lopez saw a ray of hope in a possible pardon.

His uninvited visit to Lujan Grisham’s office was highlighted in the Netflix documentary.

Lopez didn’t see the governor, but her staff took his information. Lopez started to cry, asking for mercy and saying his life depended on one signature.

On June 26, Lujan Grisham released a list of 19 names, her first pardons. Lopez was on it.

Lopez said he knows he’s still subject to deportation because he violated federal law by illegally re-entering the U.S.

“I’m at peace with myself,” he said, “in the sense that I got what I wanted, I wanted (it) recognized that the government did me wrong.”

He said he has also been able to live with his past missteps, because everybody has them.

Lopez said painting the mural, his first piece of art, was cathartic.

One portion has names of a dozen deported soldiers who only returned to the U.S. after they died.

There’s a silhouette of military boots, a helmet and rifle positioned as a memorial of a fallen soldier. “Rest In Peace: Ur Home.”

This article was written by RICARDO TORRES-CORTEZ from The Associated Press and was legally licensed through the Industry Dive publisher network. Please direct all licensing questions to legal@industrydive.com.