‘Remains of the Corps’ Offers a Fictionalized History of the Marines 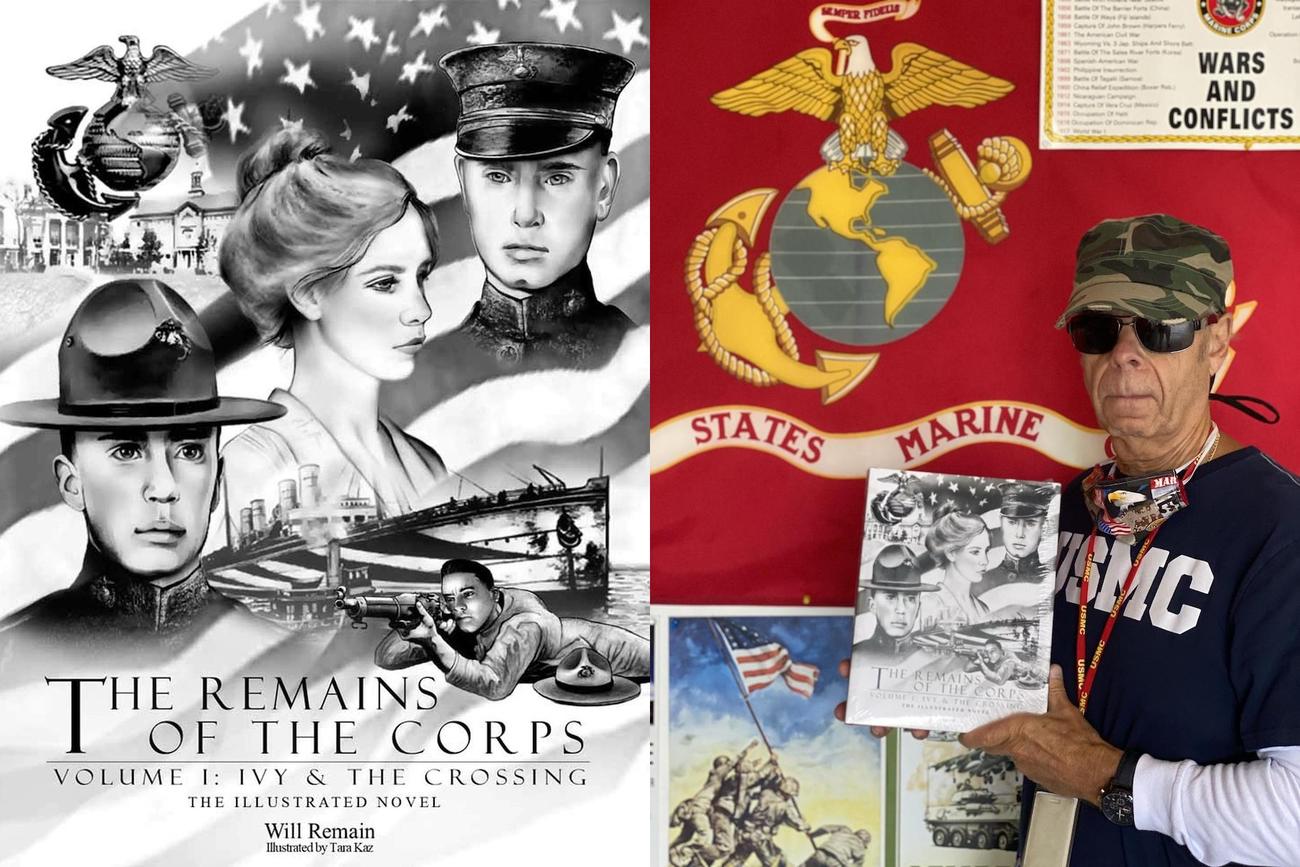 Writer Thomas Hebert of East Windsor, Massachusetts, writing as Will Remain, has drawn upon history and his own Marine service in creating the massive first edition of a planned series, “The Remains of the Corps.”

Volume I: “Ivy & The Crossing,” tells the story of fictional Worcester resident Kenneth Remain, who is Will Remain’s grandfather. Kenneth’s story comprises a history of the Marine Corps. Illustrator Tara Kazmaier of Windsor Locks, Conn., gives the book many stirring visuals of characters and action during the first World War. As an “illustrated novel,” it’s an engaging book, especially for Marine veterans. The hefty book doesn’t stint on presentation: one is drawn in by the storyline and Kazmaier’s beautiful illustrations. Club members may find it revealing in terms of WWI realities.

Inspired by his own family history and service during Vietnam (he joined during 1968), author Hebert has created a vast fictional portrait of the type of Marines he knew. His book is dedicated to Hebert’s late father, William G. Hebert of Springfield and Westfield, who served in World War II and Iwo Jima. He died in 2016. Several scenes take place in Worcester.

The fictional Will is a third-generation Marine and Vietnam veteran. As “Remain” is an anagram for “marine,” the story is to be taken as a fictional representation of the Marine Corps, told through Remain’s eyes. He creates 57 enlisted men as part of a fictional Fourth Platoon of the 87th Company (aka Third Battalion, Sixth Marine Regiment). Their stories are typical of the real Marines who served and fought in France.

While Hebert is an accountant by profession and a chief financial officer in Chicopee, his avocation is writing – and his work will be dedicated to the Marine Corps for some years to come, as he plans six volumes. “I love the Marine Corps and am forever grateful to it. It shaped me for a lifetime,” he writes. “As soon as I graduated college (American International College), I signed up and completed OCS and the Basic School and became an officer. I served from 1968-1971.”

He considers writing the series a lifelong goal, and plans to issue a new segment every two years.

“Writing a six-volume story about Marines is my way of giving back and, hopefully, doing my small part to perpetuate the Corps’ legendary status.”

Somewhat unusual, Hebert has stuck to Will Remain as the author and a primary character in the book, rather than using his own name. He says he will add his authorship to the next edition, due in two years. Hebert is at work on Volume II, “The Remains of the Corps: Belleau Wood.” Hebert plans to travel to France during 2021, “to walk the Belleau Wood Battlefield. It will be a pilgrimage of sorts, and I plan to drink from the nearby Devil Dog fountain, which is known as a source of strength to the Marines.”

The series will conclude with the Vietnam War.

This article is written by Ann Connery Frantz, Correspondent from Telegram & Gazette, Worcester, Mass. and was legally licensed via the Tribune Content Agency through the Industry Dive publisher network. Please direct all licensing questions to legal@industrydive.com.

© Copyright 2020 Telegram & Gazette, Worcester, Mass.. All rights reserved. This material may not be published, broadcast, rewritten or redistributed.