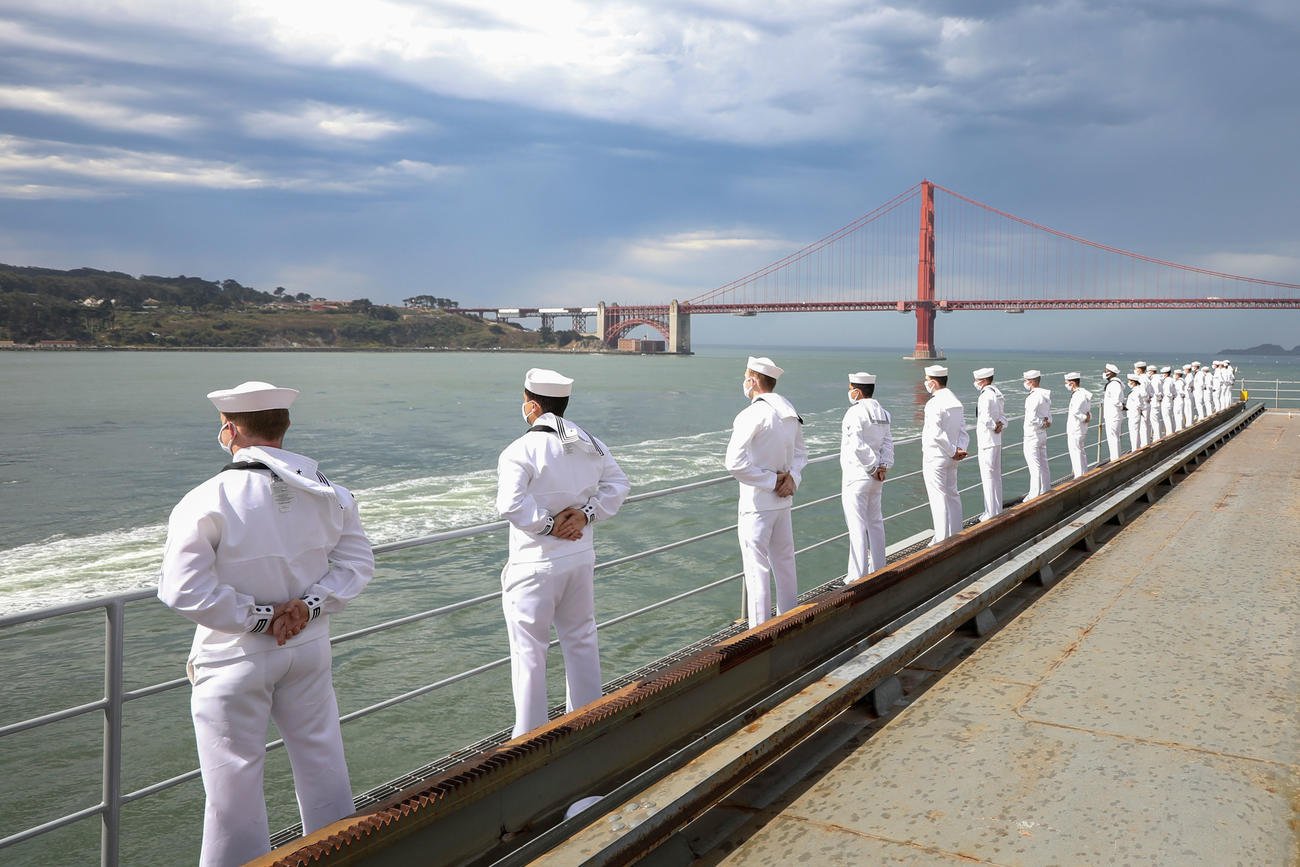 They say the best way to show up for a party is to be fashionably late. On a warm summer Sunday along the Vallejo waterfront, this was no exception for the USS Emory S. Land.

The minutes, then the hours went by with anticipation as a few hundred people waited along the waterfront near the ferry terminal. But after two years, nobody was leaving — nobody even budged. Not even with temperatures closing in on triple digits, with a touch of, oddly enough, occasional rain

After all, this was a chance to see the U.S. Navy submarine tender — the lead ship in her class.

“I think of how small we are compared to the ship when I see it. I think of all the protection the United States gets,” Ricardo Martinez said. “Then I see the ship and I say, ‘This is the definition of U.S. protection in America.'”

Although the USS Emory S. Land was originally supposed to show up at around 1 p.m., it did not pull up into the waterfront until about 2:15 p.m.

The arrival, however, proved to be well worth the wait.

“This is just over-the-top cool,” Vallejo Mayor Bob Sampayan said. “It’s just sad because I wish we had known about it earlier so we could have given them a bigger welcoming in Vallejo, like we did two years ago.”

The ship, named after Admiral Emory S. Land, had not made a visit to Vallejo since 2018. When it showed up on May 31 of that year, the crowd was much larger. Hundreds of people showed up on that day — the first time since 1996 that an active, fully-crewed U.S. Naval vessel sailed into our harbor.

For nearly 150 years Mare Island — the first American naval base on the West Coast — served as a repair hub for American vessels World War I and World War II, as well as the construction of submarines. In 1995, the Navy underwent a series of base closures and realignments, including the Mare Island base. In 1996, the base was officially closed and the last Navy ship departed the area.

Vallejo City Councilmember Robert McConnell, who is running for mayor, was at the event Sunday.

“You get a strong sense of patriotism when you see this ship,” said McConnell. “Their support is so vital to the United States and we want to make sure they feel welcome.”

As the ship drew close to the Ferry Terminal, spectators lined along the waterfront, sharing the moment with those dining at the Mare Island Brewing Taproom both downstairs and on the observation deck. Many of the people cheered, whistled and waved as the ship got closer. At one point an applause was coordinated for the sailors, lasting for nearly two minutes.

The USS Emory had about 300 sailors and 150 civilian maritime workers onboard and will remain in Vallejo for at least 100 days as it undergoes repairs at the shipyard at Mare Island.

Although the ship was docked at Mare Island in front of the Mare Island Brewing Taproom, it was still across the water and it was hard to see the sailors up close without binoculars. However, Frances Harkins came prepared. Besides the Black Lives Matter T-shirt and large American Flag, she also had binoculars and was able to cheer herself up even more when she looked through them.

Harkins’ husband, Brian, had seen the ship two years ago in 2018, but this was the first time for Frances.

“I didn’t even know it was coming today, but we live close by and saw all the people coming here,” Frances said. “I think this is so great. I remember my dad served in the military, but he didn’t talk about it much and when he did we would cry a little bit. I think of all these people that have enlisted and when I see them at attention, I see the demographics represented for the country and that makes me feel better.”

Liberty Pierson, watching from the observation deck with some friends including Martinez, was in awe when looking at the ship.

“It’s exciting and it’s one of those things that you can only see in Vallejo,” Pierson said. “Just the mass of the whole thing.”

This article is written by Thomas Gase from Times-Herald, Vallejo, Calif. and was legally licensed via the Tribune Content Agency through the Industry Dive publisher network. Please direct all licensing questions to legal@industrydive.com.

© Copyright 2020 Times-Herald, Vallejo, Calif.. All rights reserved. This material may not be published, broadcast, rewritten or redistributed.

Double Amputee Veteran, a Gun Felon, Committed to Mental Institution
‘Remains of the Corps’ Offers a Fictionalized History of the Marines