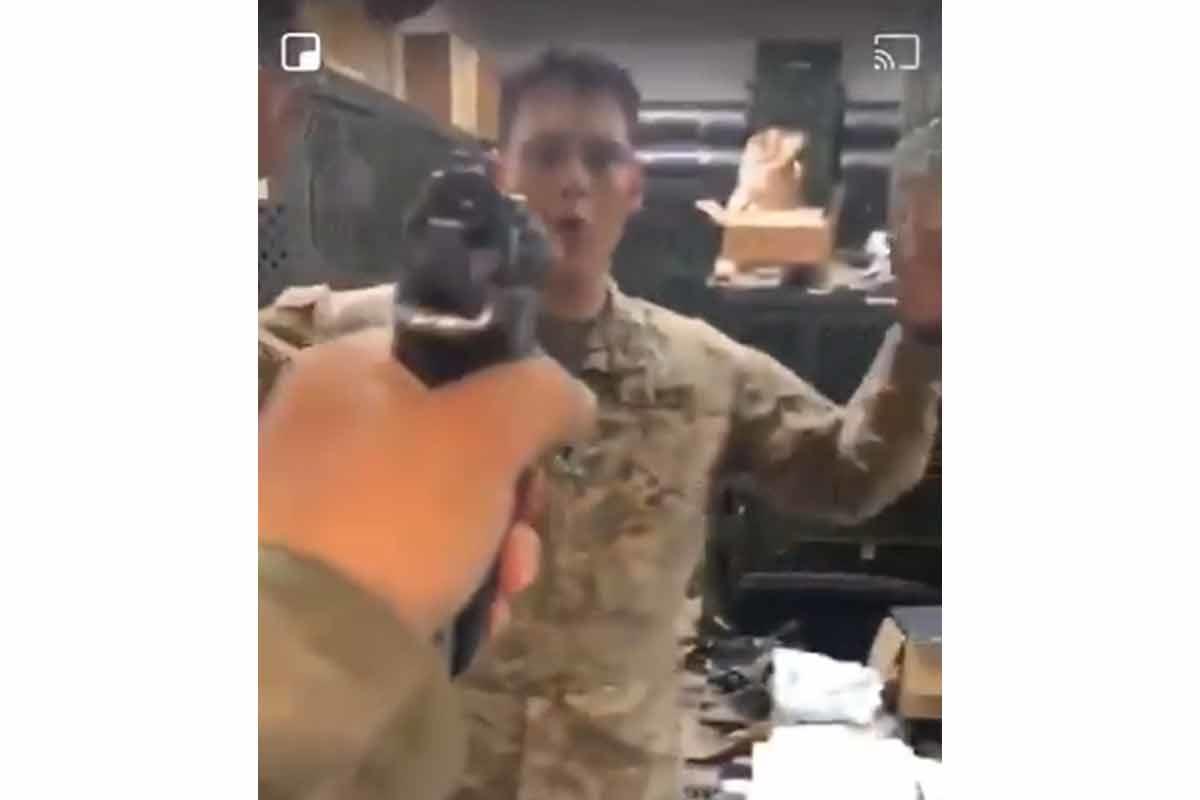 A video clip circulating on social media appears to be proof the U.S. military can’t stress weapons safety enough. But the former soldier who posted it says it’s all a joke — albeit one that triggered an Army criminal investigation.

The short clip, posted on TikTok and reshared by the Twitter account @RecruitingTruth, shows an Army specialist locking the slide of an M9 9mm pistol to the rear to ensure it’s clear and then placing it in front of another soldier, who is recording the video.

“Here you go, Sergeant; it’s clear,” the specialist says, turning his back and walking away.

Read Next: Pandemic May Force Army to Close Pathfinder School, Relocate Others

The other soldier shows the camera a magazine apparently loaded with live ammunition, inserts the magazine into the pistol, then picks the weapon up and releases the slide forward to chamber a live round.

“What are you doing, Sergeant?” the specialist asks.

Still recording, the “sergeant” then points the loaded pistol at the specialist, who puts his hands up and says, “Whoa, whoa, whoa, whoa,” as he backs away with fear on his face.

“U.S. Army soldiers are trained from the first day in Basic Training to respect all firearms,” he said. “Military service is a sacred profession, and this horrific video does not represent our values.”

Kyle Benton, the specialist who appears in the video, confirmed to Military.com on Friday that he had posted it to his TikTok account in June, around the time he finished his service contract and left the Army.

Benton said the video was staged and that the pistol was loaded with dummy rounds, which he said viewers could see if they paused the clip at the right moment. A former infantryman, Benton said he had had the video on his phone for more than a year, waiting until his discharge to post it.

The response, he said, had surprised him: He deleted the video after threatening comments started to roll in.

Benton is no stranger to provocation on social media; since leaving the military, he has posted a number of racially provocative and offensive comments on multiple Twitter accounts and was accused on a local Antifa website of distributing Nazi propaganda at a Black Lives Matter rally in Portland, Oregon.

He declined to discuss his posts and said he had never been investigated while in the Army for any viewpoints he held and had only become outspoken on social media after separating.

Benton said Army investigators had reached out to him about the TikTok video, but he had declined to speak with them.

Asked whether the soldier had been investigated by the Army over views espoused on social media, Huff said he could confirm only that Benton’s discharge was not over an issue with the Uniform Code of Military Justice.

If he could do it over, Benton said he would not repost the staged video.

“I just want people to stop thinking I was the person holding the gun so they can stop threatening me,” he said. “I will never reveal the person who was holding it.”

No one was hurt making the video. But that can’t be said in the case of former Beaufort, South Carolina-based Marine Corps Cpl. Spencer Daily, who admitted to playing around with his personal handgun before he accidently shot and killed his roommate, Cpl. Tyler Wallingford, on April 12, 2019, according to a U.S. Naval Criminal Investigative Service investigation.

Daily had been drinking heavily while playing a video game with Wallingford. During the game, Daily picked up his handgun and pointed it at Wallingford in a teasing way, he told investigators. Then, he pulled the trigger and shot Wallingford in the head, killing him.

“Hi, I’m sorry. I’m on the Air Station in Beaufort. I just shot my roommate. I’m so f—— sorry. I accidentally shot him.”

Daily was dishonorably discharged and is now serving a 69-month prison sentence in the Naval Consolidated Brig in Hanahan, South Carolina, after pleading guilty at a January general court-martial to involuntary manslaughter, willful discharge of a firearm, and violating a military order.