They Hit This Navy Vet with Batons. He Didn’t Give an Inch 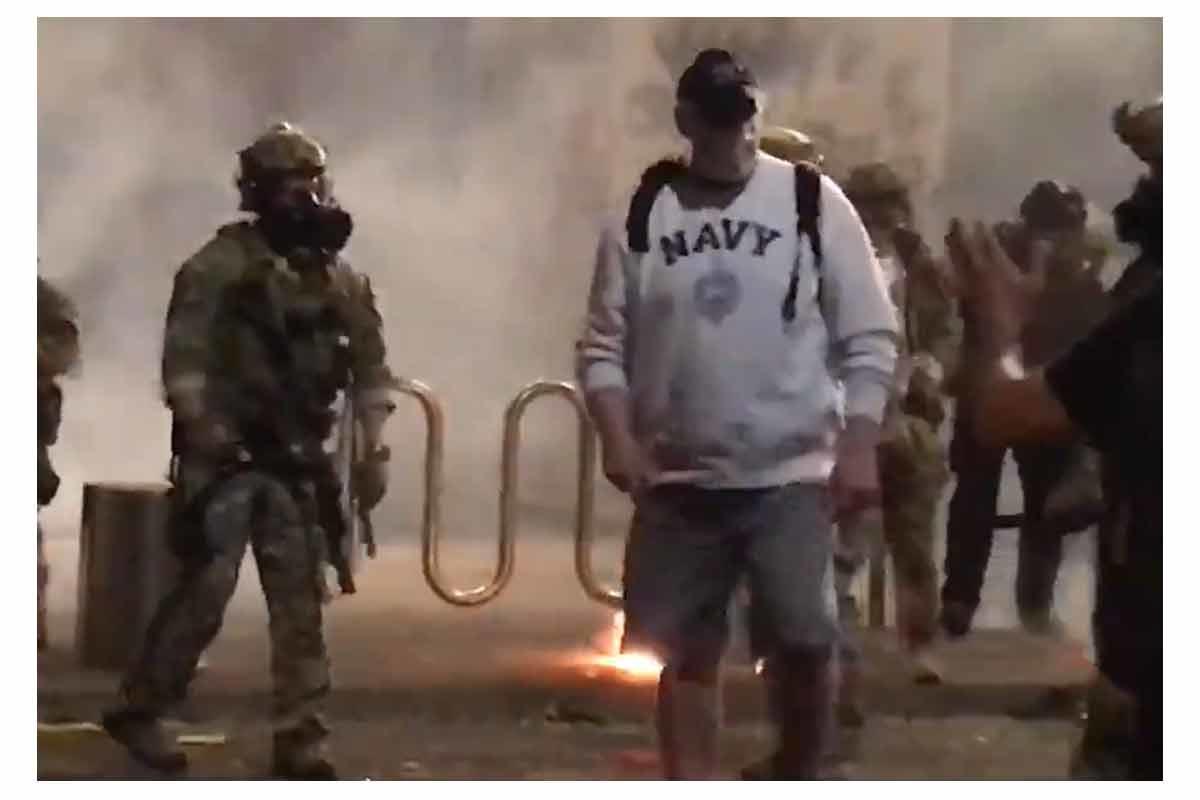 This article by Jeff Schogol originally appeared on Task & Purpose, a digital news and culture publication dedicated to military and veterans issues.

Christopher James David was commissioned on May 25, 1988, and served on active duty as a civil engineer corps officer until Jan. 31, 1996, according to his official Navy biography. He left the Reserves on June 30, 2000.

The incident occurred late Saturday night as David was attending the protests that have been happening in Portland for more than a month.

In the video taken by Portland Tribune reporter Zane Sparling, David can be seen surrounded by at least four law enforcement officials, who are dressed in military-style camouflage. David, meanwhile, is wearing a distinctive Navy sweatshirt and backpack.

Here’s the longer version of the protester being struck repeatedly by federal police tonight in Portland pic.twitter.com/v9BljIkLK0

At first, one officer pushes David back, but David does not retreat. Then, an officer hits David at least three times with his baton; once again, David does not move.

Eventually, another officer sprays David directly in the face with what looks like pepper spray. David pulls an about-face and then gives all of the officers the middle finger with both hands.

David told The New York Times that he had asked the officers why they were violating the Constitution just before they used force against him.

“I’m appalled and disappointed at the feds’ behavior — that whoever led them and trained them allowed them to become this way,” David told The New York Times. “This is a failure of leadership more than it is a failure of their own individual behavior toward me.”

He also tweeted Sunday that one of his hands was severely injured during the encounter: “The hand surgeon splinted it for now, but it looks like plates, screws and/or pins await me on Friday.”

Task & Purpose was unable to reach David as of Monday.

Doug Brown, a photographer for the ACLU of Oregon, was at the protest Saturday night and said he witnessed the entire episode.

He said David was standing in the street, posing no threat, when law enforcement officers began to hit and pepper spray him.

“He was just like complete passive resistance,” Brown told Task & Purpose. “He just took it.”

David’s stoicism while being beaten by law enforcement has earned him the nickname “Captain America” on Twitter.

Meanwhile, he tweeted that he plans to return to the protests despite his injuries.