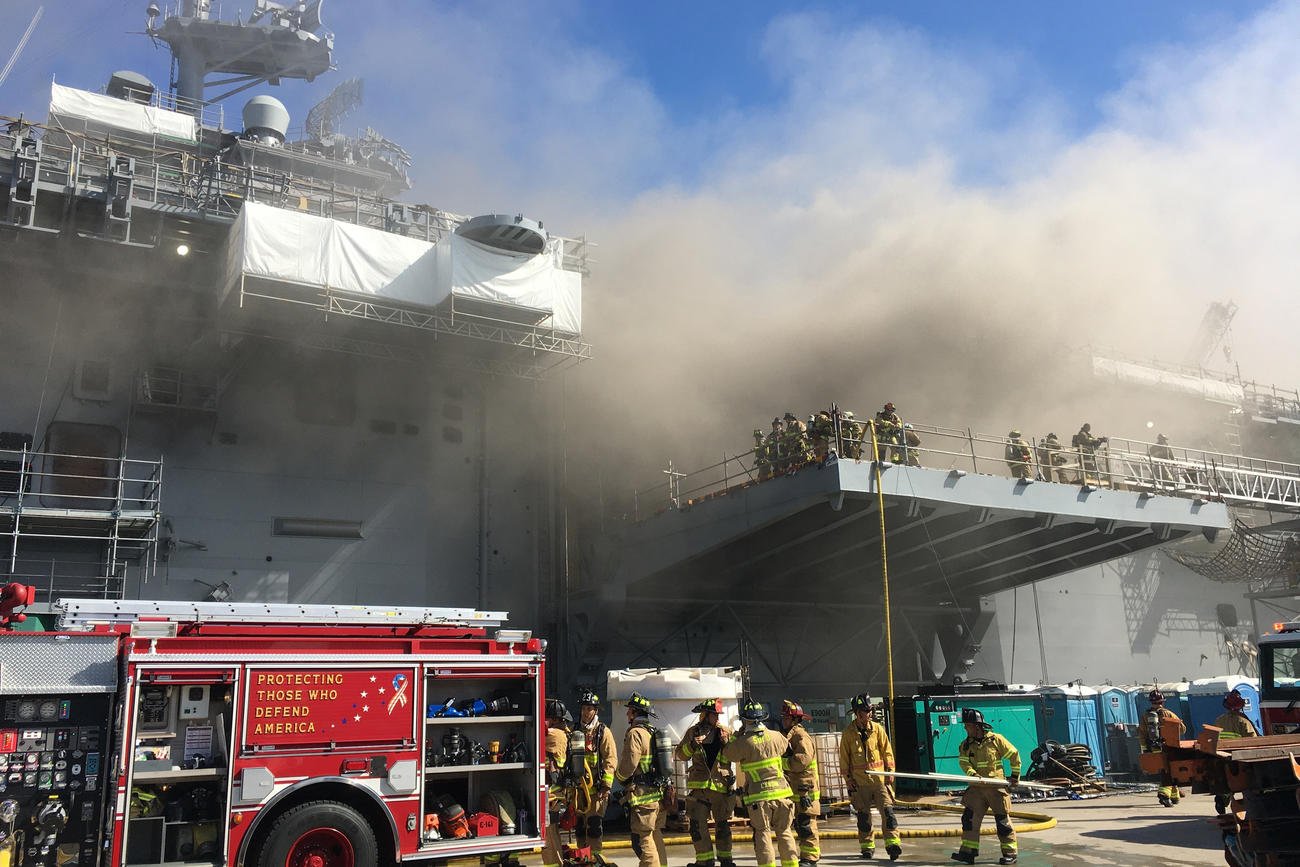 Read next: Camouflage Uniforms, Flight Suits Now Off-Limits for Marines and Sailors at the Pentagon

The fire is believed to have started in a lower cargo hold in the ship known as the “Deep V,” Rear Adm. Philip Sobeck, commander of Expeditionary Strike Group 3, told reporters Sunday night.

“It’s this huge open area where you store a lot of Marine equipment and everything else,” he said.

The fire caused at least one explosion, leading to an evacuation, Sobeck said. The cause of the explosion was not immediately known, he said, though it’s believed to have been the result of a backdraft of overpressurization in one of the compartments.

As of Sunday night, the risk of follow-on explosions was low, though not impossible, Sobeck said. Personnel set up temperature gauges and monitors to keep track of the fire’s temperature, he said.

Naval Base San Diego on Sunday announced a shelter-in-place order for everyone but first responders. Sobeck said the goal was to create an 1,800-yard safety perimeter around the ship.

The National Weather Service in San Diego on Monday recommended residents keep their windows closed if the smell from the fire was strong in their area. Sobeck said Sunday night that there was nothing toxic in the smoke from the fire and that it was being closely monitored to ensure it didn’t pose a hazardous risk.

The San Diego County Air Pollution Control District on Monday said the level of fine particles from the fire could reach unhealthy levels in some smoke-filled areas, though.

“In areas with minor smoke impacts, assume that air quality levels range from moderate to unhealthy for sensitive groups,” the agency’s website states. “In areas where you smell smoke, it is advised that you limit physical activity. If possible, stay indoors to limit your exposure to fine particulate matter.”

Lawrence Brennan, a retired Navy captain and professor at Fordham University School of Law in New York, was aboard the aircraft carrier Nimitz when it suffered a fire in 1981 that killed 14. As a member of the Judge Advocate General’s Corps, Brennan also investigated and litigated ship fire cases.

A public investigation into the fire will be necessary, he said, for the Navy to keep the public’s confidence. The service must also examine other amphibs, he said, to ensure they aren’t at risk of suffering similar fates.

“The taxpayers and the civilian leaders all need to be convinced that the Navy knows what it’s doing and is trying to avoid this,” Brennan said.

Sobeck said Sunday that the Navy will get the Bonhomme Richard repaired and back to sea, even as the fire raged into the night. But San Diego Fire Chief Colin Stowell told CNN on Sunday that the fire could continue for days, “down to the water line.”

Brennan said that could leave a great deal of steel and warping damage to the 23-year-old ship, which could make repairs expensive. The Bonhomme Richard’s flight deck was upgraded in recent years to support F-35B Joint Strike Fighter vertical lift and landing flight operations.

“If the flight deck, if the hangar deck is warped, can those F-35 flight operations be done?” Brennan asked.

If the ship does burn down to the water line, he said the much bigger concern is the risk that the hull could give way, potentially leaving the ship to break apart and sink.

“You’ve got to watch that because that wreck removal problem is an environmental disaster,” Brennan said.

Paik Sun-yup, Major South Korean War Hero, Dies at 99
Family Wants Military to Help a Marine Cope with a Sex Assault; Instead, She’s in a Brig