Marine Corps Plans to Cut Back Its Force of Working Dogs 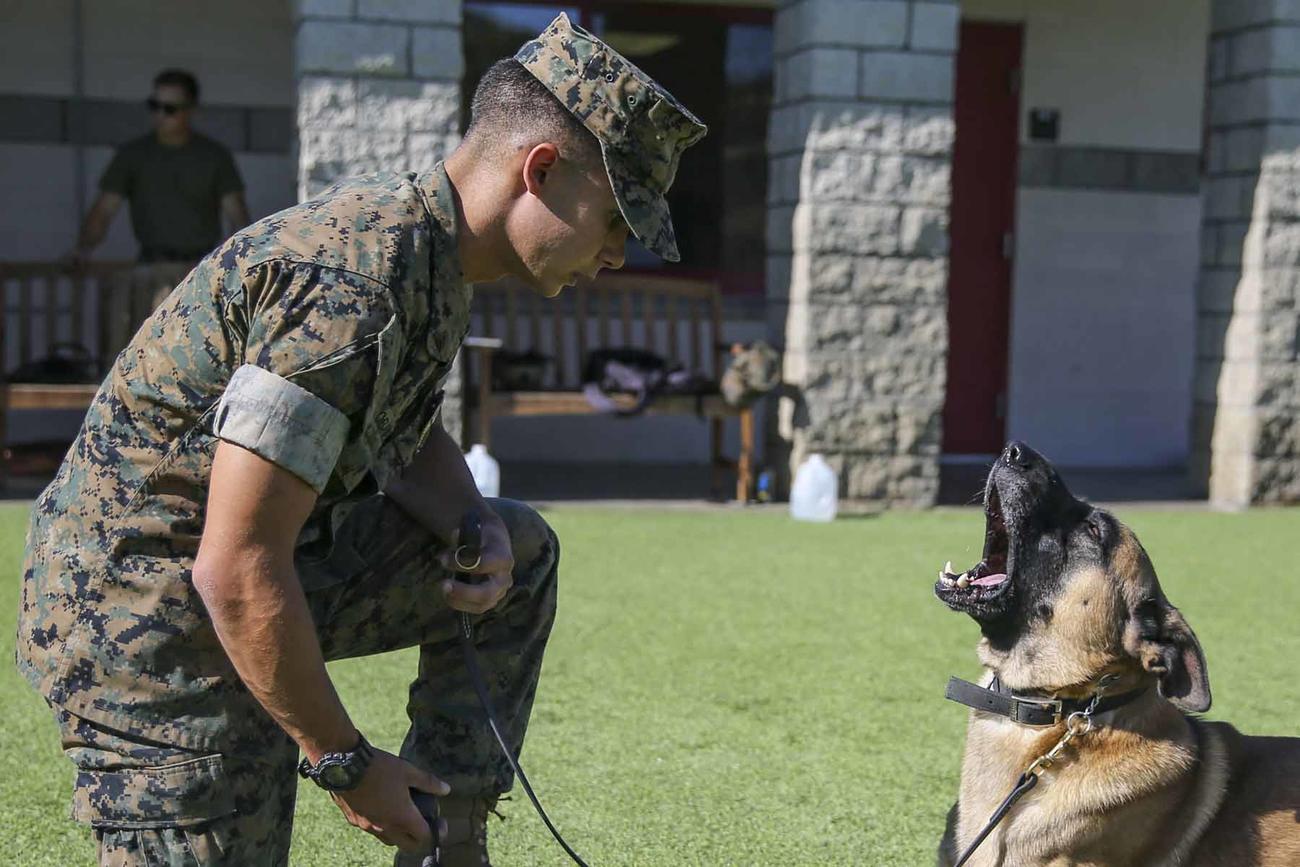 The Marine Corps is undertaking a force-wide restructuring to ensure it has the right composition to take on future conflicts. And its military working dog community, used for everything from patrols and bomb detection to security for high-profile officials, is no exception.

The Marine Corps Military Working Dog Program is undergoing a large-scale review that aims to standardize equipment and improve training — and as part of that, the working dog population is expected to shrink significantly, program director Bill Childress told Military.com.

Read Next: After 110 Years of Aviation, Navy Gets Its 1st Black Female Fighter Pilot

Under the leadership of Marine Commandant Gen. David Berger, the Corps is undergoing restructuring. Berger has indicated his intent to cut all tank units and law enforcement battalions, and reduce infantry units in a move to draw the force down from its current strength of 184,000 to about 170,000 by 2030. Already, some units are deactivating in that restructuring.

Childress said the service’s’ working dog force will be reduced from its current strength of about 210 to 150 over the next two years, the same time period in which Marine Corps law enforcement battalions are set to disband. The program’s human staff will also be downsized, he said, from 260 to about 210. This “right-sizing” is designed to find efficiencies and acquire more dogs trained for multiple skill sets, he added.

As the law enforcement battalions disband, he said, law enforcement dogs remaining in the program will be assigned under base provost marshal’s offices or Marine Corps police departments.

“We’ll still be able to perform our mission and execute everything we need to do,” he said.

Dogs that are trained for patrol and aggression can also be trained to search for explosives or drugs, although that does double the length of the training cycle from about three months to six, Childress said.

Marine Corps military working dogs deploy alongside Marine dog handlers to combat zones and even aboard ships for patrols and drug and explosive detection missions. Stateside, they can be used for drug detection and other law enforcement purposes. They also at times provide security for officials as high-ranking as the president and vice president of the United States.

All the military’s working dogs are trained at Joint Base San Antonio-Lackland, Texas, and supervised by the Air Force, Childress said. In addition to reviewing and communicating with the Air Force about how the Marine Corps wants its dogs trained, the current assessment aims to ensure that training keeps up with the times — particularly in terms of what substances dogs are programmed to detect.

“There’s a big difference between what we were seeing in Iraq and Afghanistan and here,” Childress said, acknowledging that there are fewer military working dog deployments downrange now than there were during the height of the two conflicts. “So that’s something we always stay abreast of to make sure that we’re doing the right things as best as we can.”

He demurred, however, when asked about specific trends in substances for which the dogs need to train.

As another line of effort, the Marine Corps is working to ensure that all dog trainers and handlers are using the same kinds of equipment and training devices, whether they work on the East Coast or West Coast.

“A lot of times, it was up to the provost marshal’s offices to procure their own equipment,” Childress said. “So you would go from one place to another, and you go, ‘Wow, I’ve never used this before.'”

The review and corresponding changes are taking place ahead of Childress’ planned retirement after nearly 24 years as head of the working dog program and nearly 44 years working with the Marine Corps.

“I want to make sure that I’m leaving the program the way I would want it to be left in, you know, as best as I can do a good turnover,” he said. “And I just feel that we need to do that, you know, just to take a look and make sure everything is the best that we can do.”

As the working dog program thins its ranks, handlers and trainers will be given opportunities to move to other positions in the Marine Corps, Childress said. Some of the dogs, which have an average career length of just under 10 years, will retire naturally and not be replaced; others will be moved to other services to fill gaps they have, he said.

“We’re very tight among all the services,” Childress said.