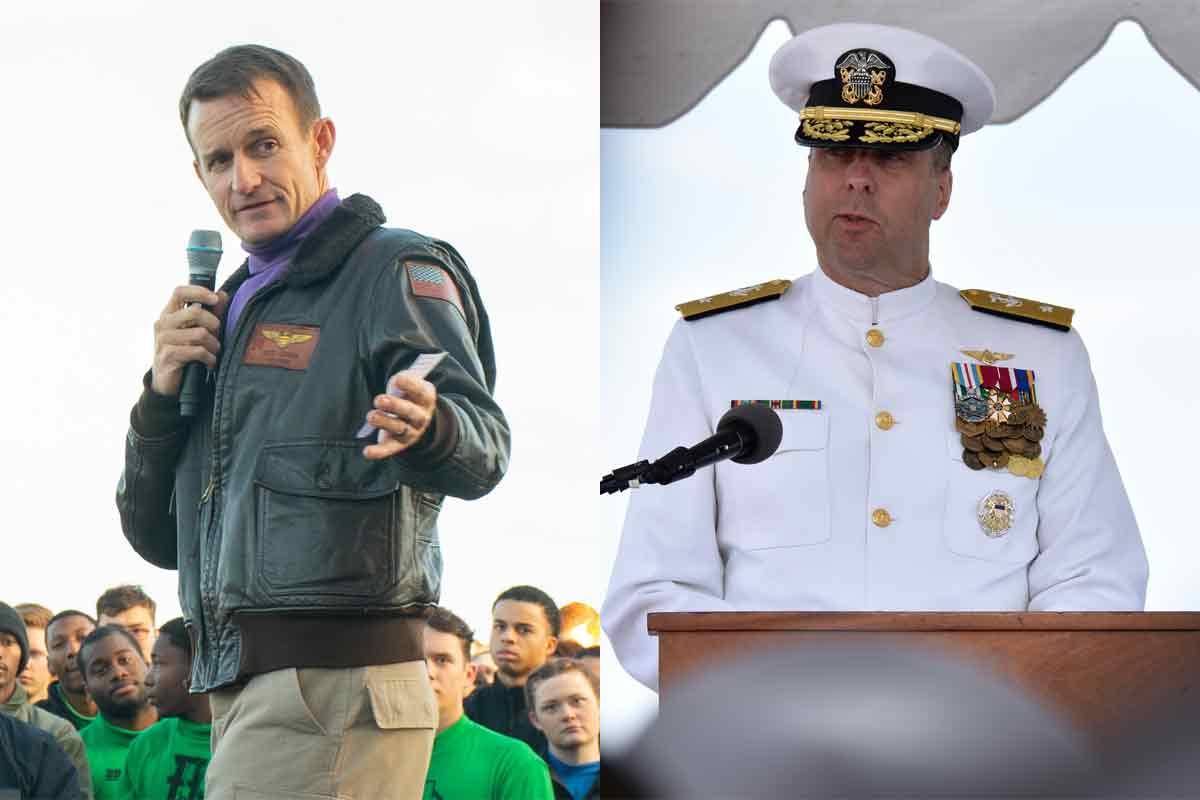 Editor’s note: an earlier version of this story and the headline incorrectly stated that Rear Adm. Stuart Baker had been fired. His promotion has been held by the Navy.

The Navy won’t reinstate the captain who was fired after warning of a serious health crisis on his ship, and the captain’s superior has also had his promotion withheld as the result of a deeper probe into the matter, top Navy leaders said on Friday.

The Navy secretary and top admiral reversed course on a previous recommendation to reinstate Capt. Brett Crozier as commanding officer of the aircraft carrier Theodore Roosevelt. Crozier will be reassigned. If he was still in command today, Chief of Naval Operations Adm. Mike Gilday said he would relieve him.

“It is because of what he didn’t do that I have chosen not to reinstate him,” Gilday said.

Crozier acted too slowly to keep his crew safe and made questionable decisions to release sailors from quarantine, potentially putting others at risk, the CNO added. Gilday also said the email Crozier sent warning about the situation on the ship “was unnecessary.”

Gilday, about two months ago, recommended that Crozier be reinstated as the Roosevelt’s commanding officer.

“Had I known then what I know today, I would have not made that recommendation,” Gilday said on Friday. “… Capt. Crozier’s primary responsibility was the safety and the wellbeing of the crew so that the ship could remain as operationally ready as possible. In reviewing both [Rear Adm. Stuart] Baker and Capt. Crozier’s actions, they did not do enough soon enough to fulfill their primary obligation.”

Baker, former commander of Carrier Strike Group Nine, won’t be promoted pending further review, Gilday said. His promotion to rear admiral upper half was approved by the Senate on March 20.

“They were slow egressing sailors off the ship, and they failed to move sailors to available safer environments quickly,” Gilday said. “… It is my belief that both Adm. Baker and Capt. Crozier fell well short of what we expect of those in command.”

The decisions are the result of a deeper review into the situation on the Roosevelt, which James McPherson directed in April over what he called “unanswered questions” while serving as acting Navy secretary.

Braithwaite said on Friday he stands by the latest investigation’s findings. Jonathan Hoffman, a Pentagon spokesman, also said Defense Secretary Mark Esper was briefed on the findings and supports the Navy’s decisions.

Baker was aboard the Roosevelt when Crozier emailed several people about a growing number of COVID-19 cases among the crew. Crozier, whose email asking for help was leaked to the San Francisco Chronicle, was ultimately fired by then-acting Navy Secretary Thomas Modly over his handling of the situation.

Modly told reporters when announcing his decision to relieve Crozier of command that the captain should’ve walked “down the hallway” to discuss his concerns with Baker before sending the email. Modly later resigned from his post as acting Navy secretary amid backlash over these events.

The Roosevelt pulled into Guam in late March as more than 100 crew members tested positive for COVID-19, the sometimes-fatal illness caused by the coronavirus. Crozier had warned in his email that sailors could die if they didn’t quickly evacuate the ship.

“If we do not act now, we are failing to properly take care of our most trusted asset — our Sailors,” he said.

Ultimately, more than 1,200 members of the roughly 4,800-person crew tested positive for the virus, including Crozier. One sailor, 41-year-old Chief Petty Officer Charles Robert Thacker Jr., died of the illness.

Gilday said his initial recommendation to reinstate Crozier was based only on “a narrowly scoped investigation” that looked only at why he had sent the email warning.

“I was tasked to take a look at those facts against then-acting Secretary Modley’s justification for relieving him,” Gilday said, “and I did not feel that the … facts supported the justification.”

The CNO said the two-month-long deeper investigation, ordered by McPherson, made additional facts visible. That included the decision to lift quarantine in part of the ship, which allowed about 1,000 crew members to potentially expose other sailors to the virus, Gilday said. He also said Crozier and Baker failed to take advantage of 700 beds in a gym in Guam that were spaced 6 feet apart, choosing to put his sailors’ “comfort over safety.”

In his endorsement letter accompanying the results of the investigation, Gilday said he thought Crozier had the best interests of his crew and the readiness of the ship in mind. But, he added, Crozier did not “forcefully and expeditiously execute the best possible and available plan, or do enough, soon enough.”

Baker and Crozier were talking to the U.S. Seventh Fleet commander every day, Gilday told reporters on Friday, and if the two had issues they should have raised them.

Rep. Adam Smith, a Washington Democrat and chairman of the House Armed Services Committee, said on Friday that everyone up and down the Navy chain of command had a role to play in the inadequate response to the situation on the carrier. Smith announced that his committee has launched its own investigation into the Roosevelt’s COVID-19 outbreak.

“The Department’s civilian leadership portrayed Captain Crozier’s decision-making aboard the Roosevelt as the critical weakness in the Navy’s response, but the truth is that civilian leadership was also to blame,” Smith said. “… While the committee works on our own investigation, it is my hope that the Navy will learn from this series of mistakes.”