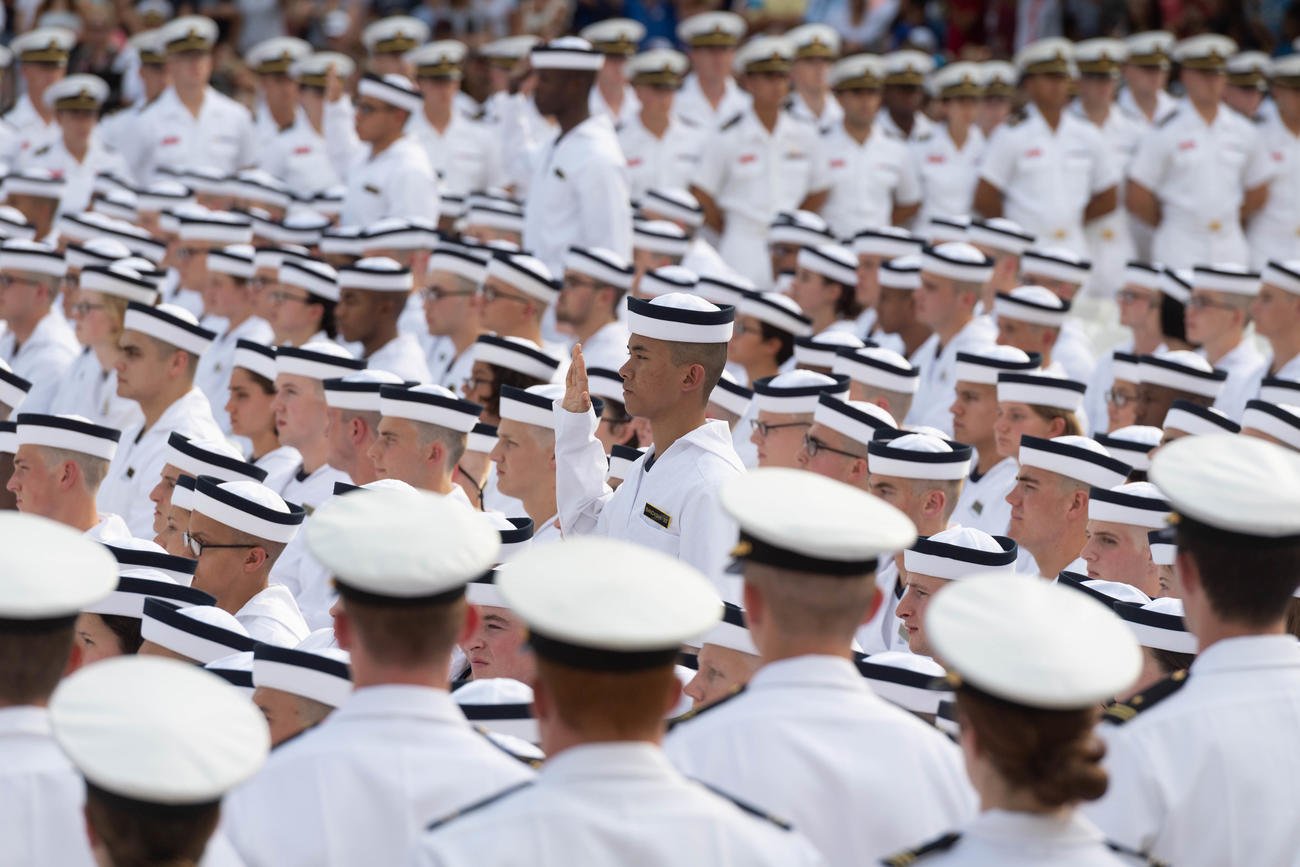 For the class of 2023, the end of the plebe year was meant to be marked with the Sea Trials, a grueling set of tasks over 14 hours.

Instead, because of the coronavirus pandemic, Naval Academy classes went online, midshipmen, plebes included, were sent home and some events, like the Navy cruises, were canceled.

Sea Trials became E-Trials, a modified version of the physical endurance tests, with plebes participating remotely. Instead of 14 hours, E-Trials took place over an eight-hour period Saturday. There were seven scored physical challenges to be done at home.

The E-Trials were completely voluntary, although about 75% of the class participated, Commandant Capt. Thomas Buchanan wrote in an email.

“This effort was undertaken as a means to celebrate the Class of 2023’s accomplishments and bring them together in a small, distributed but memorable way,” Buchanan said in his email.

Once each activity was complete, the plebe sent their scores to their squad leader. The company with the top unit performance would be given the title of “Iron Company,” according to the Naval Academy’s Instagram page.

E-Trials began with a videoed Opening Ceremony featuring Superintendent Vice Adm. Sean Buck and Buchanan at Hospital Point, the site of the “Wet Sandy,” considered to be the most grueling tasks of the Sea Trials, Buchanan said.

While the plebe class would not be able to participate in the task this year, Buchanan said that it would be an experience to which it could look forward.

The E-Trials would be “a very unusual version” of Sea Trials, Buck said, although he encouraged the plebe class to show the class’ strength.

“While you have surely earned the right to be called a youngster now, conducting your Sea Trials today, accomplishing it with resilience, grit, fight and integrity will show all of us in the brigade and back in Annapolis how strong the class of 2023 is,” Buck said.

“This is a Naval Academy first, but I assure you, E-Trials will be no slouch,” Schneider said.

The first challenge started off with a half-mile jog as a warmup, followed by a 1-mile timed run, reaching planks (where a person extends an arm, one at a time, while in a plank) and a partnered exercise, where the plebes used Zoom to do it together. The partner exercise asked the plebes to do as many repetitions of push-ups, star jumps, leg levers, 15 eight-count bodybuilders (an exercise created by the Navy).

The challenge ended with another round of reaching planks.

The challenge was scored on the average mile time and the average total number of repetitions completed as a pair. All challenges involved some sort of exercise. Some were focused on burpees. Others on running.

Plebes were encouraged to hydrate throughout the trials, and although none of the challenges involved being in water, many of the later ones involved carrying a gallon of water.

After finishing parts of the challenge, plebes were encouraged to pour the gallon of water over their heads, only if they had the ability to refill.

The entire trials led plebes to walk or run 12 miles and do hundreds of push-ups, burpees, squats and presses, Schneider said in a recorded closing ceremony video.

As the E-Trial commenced, the Naval Academy used Instagram stories, allowing Schneider and other leaders to demonstrate the different challenges. Companies also posted pictures of the plebes as they completed different tasks, with a popular photo being plebes dumping the water.

The superintendent and commandant also took to Buchanan’s commandant Instagram to perform a modified version of Sea Trials as well.

Their E-Trials ended with a paddleboard trip down the Severn River. The honor of the Iron Company went to the 12th Company, he said.

“While it is disappointing that the members of Class of ’23 could not execute a Sea Trials together here in Annapolis, it did bring together many midshipmen across the country in different regions,” Buchanan said in his email. “Many executed their exercises with others, but did so in a socially distanced way and adhering to local health guidelines. Were there some glitches? Yes, but it was an experience that exceeded our expectations!”

During the closing ceremony, Cmdr. Kelly Lang, 5th Battalion officer, congratulated the plebe class. He also highlighted a major difference for the trials. This year, because it was done remotely, the plebes completed their trials mostly alone.

They did not have each other to lean on or to pull strength from, Lang said. But the class was unified, and that unity will help them as they continue through the academy, graduate and serve in the Navy.

With the completion of the E-Trials, the class of 2023 will no longer be considered plebes, he said.

“Till now, you’ve called yourself fourth class midshipmen, plebes, but now you are third class midshipmen of the United States Naval Academy,” Lang said. “I couldn’t be more proud.”

This article is written by Heather Mongilio from The Capital, Annapolis, Md. and was legally licensed via the Tribune Content Agency through the NewsCred publisher network. Please direct all licensing questions to legal@newscred.com.